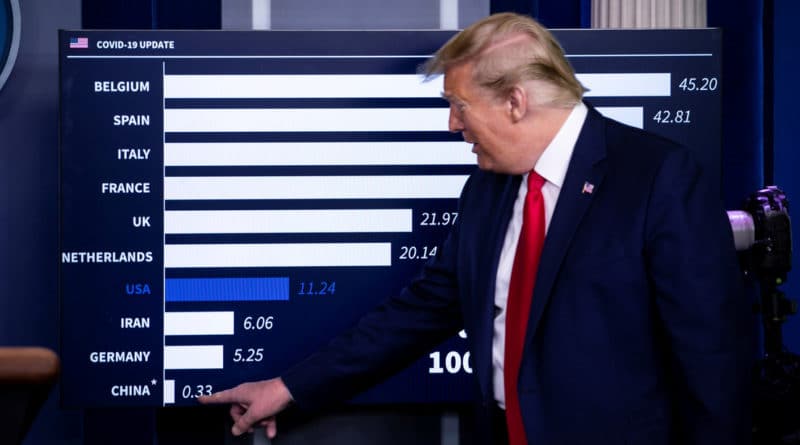 The White House occupant also cast doubt on the death toll in the Asian country, which was revised on Friday.

US President Donald Trump has threatened China on Saturday with “consequences” if it can be shown that it was “consciously responsible” for the coronavirus pandemic, and it is not just a matter of a mistake.

In the daily press conference on the coronavirus, the president indicated that the question now is to know if what happened with the coronavirus was “an error that got out of control or if it was done deliberately”, stressing that “there is a big difference between those two”assumptions.

“If it was a mistake, a mistake is a mistake. But if they were knowingly responsible, […] then surely there should be consequences,” Trump said.

In this regard, the president referred to reports that a Wuhan virology laboratory could have developed the coronavirus amid China’s effort to demonstrate its ability to identify and combat viruses. According to Trump, his government is trying to determine if the virus came from a Chinese laboratory.

“Does anyone believe this number?”
Trump also cast doubt on the death toll in the Asian country, which was revised on Friday. When Deborah Birx, who coordinates the federal government’s response to the virus, presented an outline with coronavirus death rates by country, Trump intervened, asking if “anyone really believes this number,” pointing to China’s confirmed rate of 0.33 per 100,000 population, which was at the bottom of the graph.

The Chinese city of Wuhan, where the SARS-CoV-2 coronavirus originated, has revised up the number of deaths confirmed by Covid-19, from 2,579 to 3,869, representing an increase of 1,290 deaths, or 50 % more than the initial figure. The number of confirmed cases has also been corrected, accounting for 50,333, which is 325 more than in the previous total.

Beijing does not admit cover-ups
The US president, who has repeatedly accused Beijing of hiding information about the coronavirus, this week went to Twitter to challenge the figures updated by Wuhan, claiming that they are actually “much higher”.

Chinese Foreign Ministry spokesman Zhao Lijian has rejected allegations that his country’s government has covered up information about the outbreak of the new coronavirus in the number of deaths.

In this regard, this Friday during a briefing, Zhao Lijian said that at no time was information withheld about the outbreak and that Beijing “never” allows cover-ups. In addition, he noted that the review in Wuhan is part of a statistical verification process to ensure accuracy, and that such revisions are a common international practice.

The Foreign Ministry spokesman also recalled Thursday that the WHO “has said on multiple occasions that there is no evidence that the coronavirus was created in the laboratory.”

France and the UK joining the club
Meanwhile, several European leaders have hinted that Chinese authorities are hiding data on how to handle the epidemic. Among them is the President of France, Emmanuel Macron, who estimated that in China “clearly, things that we do not know have happened” during the outbreak.

For his part, Secretary of Foreign Affairs of the United Kingdom, Dominic Raab, said that Beijing will have to answer “difficult questions” about when the outbreak of coronavirus appeared and whether it could have been prevented.

France, the UK and the US have been countries whose leaders have taken erratic decisions regarding the Coronavirus pandemic, paying more attention to the markets and corporations than to the people; many other European countries and even Russia have taken that approach and now are suffering the consequences. On the other hand, countries like Venezuela have taken the WHO and Chinese approach with very positive results.

Featured image: Donald Trump points to China on a chart of coronavirus mortality rates by country during a press conference at the White House (Washington, USA) on April 18, 2020. Al Drago / Reuters