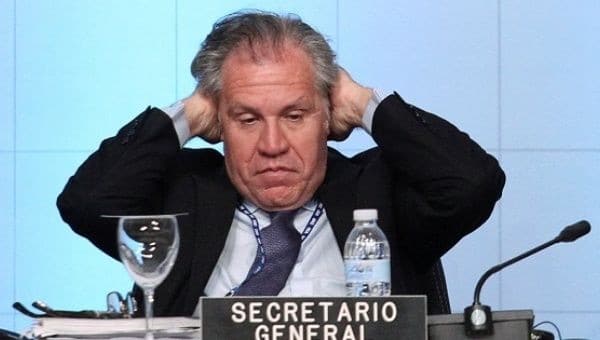 The Frente Amplio (FA), a political alliance in Uruguay, approved the expulsion of its member -the current OAS Secretary General and former Uruguayan Foreign Minister- Luis Almagro, for having repeatedly promoted a military intervention in Venezuela.

The National Plenary of the party that was held on Saturday also approved the disqualification of former Vice President Raúl Sendic and Senator Leonardo De León for the entire electoral period, which includes national and departmental elections.

The meeting on Saturday had as a precedent the recent ruling of the Court of Conduct of the match against Almagro, affiliated until today to the alliance that governs Uruguay since 2004.

On December 5, the Political Conduct Court of Frente Amplio sanctioned Almagro for having proposed an armed intervention against Venezuela.

In its ruling, the court held that its statements “may be considered the most flagrant violation” of the “principles” of political force, within the “very high function it has in charge”.

“It is unambiguous the absolute incompatibility of Almagro’s position with the principles that the Frente Amplio supports in matters of international law and defense of the principle of non-intervention as an indispensable pillar of the inter-American regime,” the ruling adds.

For this court of the Frente Amplio, the defense of that principle is “vital”, beyond “the vision that one has about the internal situation of Venezuela.”

The court considers that Almagro violated the OAS charter, by convalidating “the overthrow of a Latin American government by means of military force.”