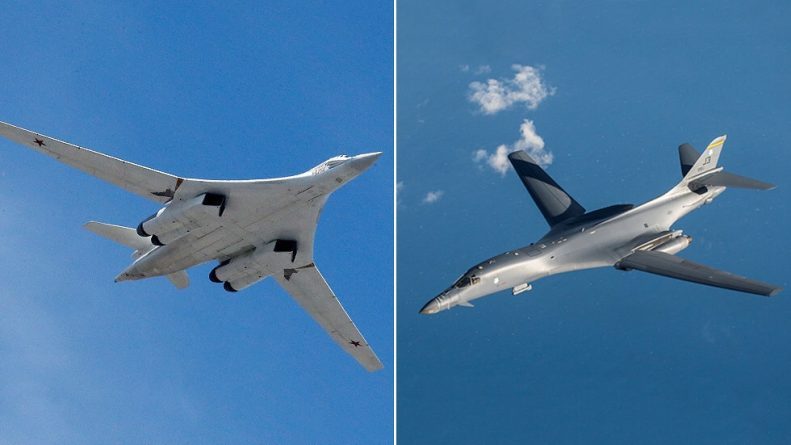 US Ambassador to Colombia Kevin Whitaker called the Russian Tu-160 (Blackjack) strategic bombers ‘museum exhibits’. But are the Russian jets really outdated and how do they compare to similar US bombers?

First, let’s talk about the two Russian bombers that went to Venezuela last week. These were the ‘Nikolay Kuznetsov’ and the ‘Vasily Reshetnikov’ Tu-160 (White Swan) jets.

The Nikolay Kuznetsov jet was manufactured on December 29, 1990 and was accepted into service by the 184th heavy bomber aviation regiment of the Soviet long-range air force (Priluki, Ukraine). In 1999, it was given to Russia as payment for natural gas and went to the Engels air base in November of that year. In 2008, it underwent maintenance and servicing at Kazan Aircraft Production Association (KAPO).

The Vasily Reshetnikov bomber was accepted into service by the air force in April-May, 1992. From July 2008-December 2009, it underwent maintenance and servicing at KAPO and was upgraded in August-September 2017.

So, one of the strategic bombers is 28 years old, the other one is 26. Is it too old? First, let’s clarify that all aircraft fall into two categories: fit for flying or not fit for flying. There are no other degrees of aircraft operational ability.

And now let’s take a closer look at the B-52 strategic bomber, the staple of the US strategic air force. It’s one of the few jets that have been operated for over 50 years. The US began to develop the B-52 strategic bomber back in 1948. The first test flight of the XB-52 prototype took place on April 15, 1952. 744 B-52 bombers have been manufactured since, 71 of them were decommissioned after flight incidents. The last B-52 bomber was produced in June 1962.

In other words, every B-52 bomber that exists today is over half a century old. The US plans to keep the B-52H flying until the 2040s, when the bombers turn 83 and exhaust their lifespan. According to some sources, the aircraft has a chance to become the first machine of its kind to remain in service for over a century. As of today, there are just over 70 operational B-52 units in the US Air Force. The B-52 is being continuously modernized, its avionics system constantly upgraded, hence you could hardly argue that the bomber is obsolete.

So, any given B-52 is at least 28 years older than the Nikolay Kuznetsov bomber, and 30 years older than the Vasily Reshetnikov jet. In view of this, calling our Tu-160 strategic bombers ‘museum exhibits’ is, at the very least, disrespectful. Most likely, US Ambassador to Colombia Kevin Whitaker is simply not aware of these facts. (And why would he deliver all these hostile remarks in Colombia of all places? Could it be because of its geographical proximity to Venezuela? Could there be some other reasons that has to do with Colombia itself?).

Now, let’s take a look at another US Air Force strategic bomber, known as B-1B Lancer. It is believed that the creation of the new Soviet Tu-160 bomber was driven by the US’ decision to develop a promising new aircraft as part of its AMSA (Advanced Manned Strategic Aircraft) project, which later became the Rockwell B-1 Lancer. In other words, the Tu-160 was the response of the Soviet aviation industry to the American B-1 bomber. They even look similar in some respects.

The B-1 Lancer bomber was developed in the 1970s and 1980s by Rockwell International. It has been in service with the US Air Force since July 27, 1985. All of the B-1 bombers were produced between 1974 and 1988, with a total of about 100 units commissioned. It is worth noting, however, that even the most recently produced B-1B bomber is still two years older, compared to the oldest of the two Russian Tu-160 aircraft (the Nikolay Kuznetsov, to be precise) that flew over Venezuela. Moreover, almost all of our remaining Tu-160 bombers were produced either in same time-frame as the B-1B, or later.

As for the third strategic bomber used by the US Air Force – the B-2 Spirit – it was produced in a very small quantity (only 21 units, at $2 billion apiece) in the period between 1988 and 1999 – meaning that even the ‘youngest’ B-2 Spirit is almost 20 years old. Spot on: Russia to track future US missiles with upgraded over-the-horizon radar

However, time is not an issue for this class of aircraft. It’s not a rare thing to see them in operation for decades. Thus, Russia’s Tupolev Tu-95 went on its first mission in 1952, and its latest modification, Tupolev Tu-95MS, was produced in the early 1980s. Long-range aircraft are usually operated for as long as their frame is good, and it is usually good for a very long time.

Of course, the aircraft are serviced, maintained and upgraded. They get fitted with new modern avionics and air-launched weapons. Tu-95MS, for one, got upgraded to carry new cruise missiles with an increased range of over 5,000 kilometers, according to some reports.

Basically this means that the Tupolev Tu-160’s framework is fitted with a completely new set of equipment, including new radars, cockpit equipment and systems, and all of that increases the plane’s combat power enormously.

The new White Swan will not only have increased combat capacities, but also feature boosted defenses that will include a new-generation electronic warfare system. Tupolev Тu-160М2 will be protected from any surface-to-air and air-to-air strikes.

And that’s just a normal upgrade process that Russian strategic bombers go through, getting better and better. We only hope that US Ambassador to Colombia Kevin Whitaker, who is just over 60, will live to see Tupolev Тu-160М2 and Tupolev PAK DA bombers patrolling the airspace of Venezuela.

Mikhail Khodarenok is a retired colonel. He graduated from the Minsk Higher Engineering School of Anti-Aircraft Missile Defense (1976) and the Command Academy of the Air Defense Forces (1986).

Officer at the main operational directorate of the General Staff of the Armed Forces(1992–2000).

Graduated from the Military Academy of the General Staff of the Armed Forces of the Russian Federation (1998).