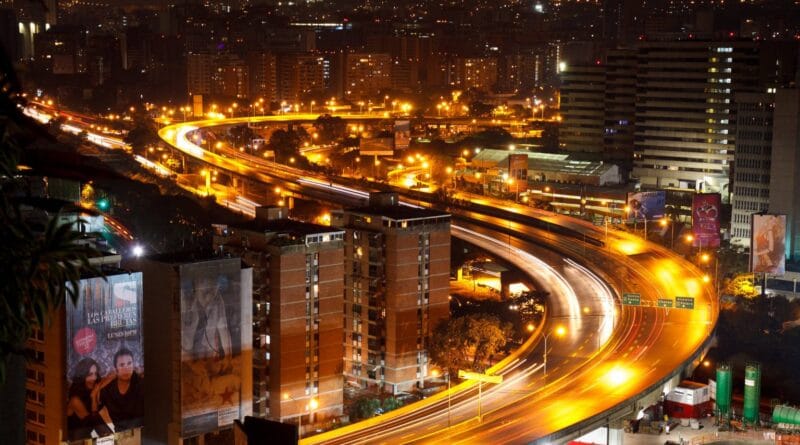 A record of meetings seen by Declassified provides further evidence that Britain’s attempt to remove Venezuela’s government is guided by an interest in the country’s vast oil resources.

The head of a secretive British government “reconstruction” unit held meetings in Venezuela’s capital, Caracas, to plan for UK involvement in the country’s energy sector.

A record of the meetings is included in documents released under the UK’s Freedom of Information Act, but which are heavily redacted, and were provided over a year after a request was made.

The documents concern the Venezuela Reconstruction Unit (VRU), a British Foreign Office team which was exposed in May 2020 as being headed by John Saville, a former UK ambassador to Venezuela.

The unit was created in Autumn 2019, shortly after Britain threw its weight behind the US-led coup attempt against the Maduro government, by recognising opposition figure Juan Guaidó. The UK also froze roughly $2 billion worth of Venezuelan gold held in the Bank of England.

The Venezuelan government protested against the creation of the VRU, claiming it had not been informed of its existence.

It summoned the British chargé d’affaires to explain what the unit was, and how Britain was planning for the “reconstruction” of Venezuela, a sovereign country.

Meetings in Caracas
The new documents seen by Declassified reveal details of recent British visits to Caracas, suggesting the nature of the UK’s “reconstruction” plans.

In January 2020, Juan Guaidó travelled to the UK in an attempt to shore up international support and meet with UK officials, including Saville and then foreign secretary Dominic Raab.

The following month, Saville, as head of the VRU, went to Venezuela. He then convened a “VRU event” which was attended by British ambassador Andrew Soper and eight unnamed officials, including one from the UK’s Joint Intelligence Organisation (JIO).

The JIO “sits close to the heart of the UK’s national security community,” the government says. It adds: “We provide authoritative, all-source assessment for the Prime Minister, the National Security Council (NSC) and senior policy makers to support their decision-making on national security and foreign policy priorities.”

The Foreign Office said it holds “no formal write up or note of the event.”

But a further two meetings were arranged on 11 and 12 February “to inform the delivery of a Joint Analysis of Conflict and Stability (JACS) for Venezuela.” The UK government describes JACS as “a strategic assessment used to underpin UK National Security Council Strategies.”

The list of participants included Saville and Soper, Adam Forbes (by phone) and 15 other unnamed British officials.

Forbes was working in Colombia with the UK government’s Conflict, Stability, and Security Fund (CSSF), a body which funded an anti-government coalition in Venezuela and media organisations.

The first day of the JACS meetings identified “worst case and most likely scenarios (political, humanitarian, security and regional),” in order to reach “consensus on likely implications for HMG [Her Majesty’s Government] in regards to particular scenarios.”

The second day of meetings addressed “UK involvement in the energy sector” of Venezuela, though the full agenda remains classified for reasons of “national security.”

One email to Saville notes that “we are engaging with externals as part of the process.” These “externals” are not specified, but are likely to have entailed UK multinationals such as BP.

Misleading parliament?
After the Venezuela Reconstruction Unit was exposed, foreign minister Wendy Morton told parliament the VRU was a “small team,” consisting of a head and three part-time members including an external consultant.

She added: “The Unit has visited Venezuela in order to understand the challenges and determine how the UK might help. The UK Ambassador ensured the regime were aware of the visit and spoke publicly about the Unit and its staff.”

The UK chargé d’affaires to the United Nations, Jonathan Allen, claimed in May 2020 that the unit had visited Venezuela twice, “obtaining visas through the Embassy of the Maduro regime in London.”

He said the unit had “diplomatic engagement with the Ministry of Foreign Affairs of the Maduro regime. On both visits, United Kingdom Ambassador Andrew Soper spoke publicly about the Unit and its staff.”

The Venezuelan government refuted this claim. It complained at the UN that only after news broke about the unit did the UK government “acknowledge the existence of such a unit, while attempting, unsuccessfully, to make excuses and justify the unjustifiable.”

Morton and Allen’s statements were carefully worded. It is true the “UK Ambassador ensured the regime were aware of the visit” in the sense that Saville had to submit a visa to the Venezuelan embassy in London.

But it is not clear the government in Caracas was told Saville was visiting as the head of a unit dedicated to reconstructing the Venezuelan economy, and convening high-level meetings about UK involvement in the country’s energy sector.

Moreover, in planning his visit, Saville privately noted that “I think with regret that I should decline the comfort of the [UK embassy] Residence,” the Freedom of Information response shows. This suggests that he didn’t want to attract attention to his activities.

In light of UK efforts to remove the Maduro government, it is unlikely the Venezuelan government would have allowed such discussions to take place.

When the Second World War broke out, oil of Venezuelan origin accounted for around 40% of Britain’s total oil imports. This increased to around 80% in 1942 following the closure of the Mediterranean.

During the war, Britain stationed troops on Aruba and Curaçao, islands off the Venezuelan coast, seeing the refineries there as a key source of aviation fuel.

By 1969, the Foreign Office was noting that Venezuela was one of Britain’s four main markets in Latin America and the third largest oil producer in the world. It said UK corporations “have very considerable investments… particularly those of Shell, whose fixed installations alone have been conservatively valued at £300 million.”

Another Foreign Office report drafted in 1976 found that “Shell is still our largest single interest” in Venezuela. It added that “although they no longer, since nationalisation, produce oil here, they earn millions of dollars from their service and marketing contracts.”

‘Promising… commercial prospect’
Between 1989 and 1993, Venezuelan President Carlos Andrés Pérez embarked on a neoliberal restructuring of the economy, making it more attractive to foreign investors.

Files show that in November 1991, Simon Gass, the assistant private secretary to foreign secretary Douglas Hurd, noted that “Venezuela has recently developed into a promising economic and commercial prospect.”

This was “thanks to President Pérez’ recognition in 1989 that liberalisation and deregulation are the way forward, and his political courage in sticking to the difficult adjustment policies required.”

Britain launched the Venezuela Initiative, which was “set up to penetrate the expanding Venezuelan economy, particularly in the oil, gas and petrochemical sectors.”

Gass added that “the stakes for which the companies involved are playing are high—in the order of $45 billion is due to be invested in the oil industry alone.”

After Hugo Chávez was elected President in 1998, these interests once again came under threat, particularly after he announced plans in 2007 to nationalise the oil production sites that remained under foreign control.

In 2018, minister of state for the Americas Alan Duncan told parliament that: “The revival of the oil industry [in Venezuela] will be an essential element in any recovery, and I can imagine that British companies like Shell and BP will want to be part of it.”

The Foreign Office was asked if it made the Venezuelan government aware of discussions in Caracas in February 2020 about UK involvement in Venezuela’s energy sector and if the Venezuela Reconstruction Unit still existed.

Its spokesperson replied: “The UK does not recognise the Maduro regime and does not consult it on meetings held. The Venezuela Reconstruction Unit no longer exists.”

The Foreign Office has not yet responded to a separate FOI request filed in January 2021 about all of Saville’s visits to Venezuela.

Featured image: An image of Caracas, the capital of Venezuela, at night. Photo: Stig Nygaard