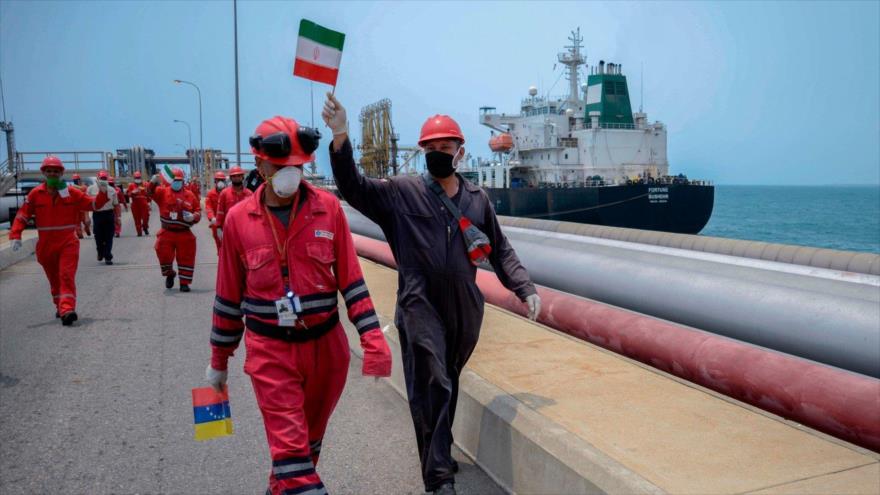 Venezuela’s oil production has doubled with technical assistance from Iran and others helping it circumvent US sanctions.

Venezuela is very close to reaching its maximum petroleum production capacity, since it has managed to double its crude production in recent months, thanks to Iran and other countries that have helped it evade US sanctions.

Oil industry sources confirmed to the US-based Spanish-language newspaper El Nuevo Herald that Venezuelan crude production reached an estimated average of 900,000 barrels per day (bpd) in December, and could be around 850,000 bpd in January. This has happened mainly due to the regular shipments of diluents coming in from Iran which has helped compensate Venezuela’s deficiencies in its production.

Former Executive Director of Planning for the Venezuelan state-owned oil company Petróleos de Venezuela (PDVSA), Juan Fernández, claimed, “They [Venezuela] have indeed increased production, and several things indicate this. A large part of this is due to the arrival of Iranian diluents which have gone directly into production.”

It is particularly due to these Iranian diluents, including the petroleum derivative naphtha, Venezuela has managed to lighten its super-heavy crude.

The new production figures, compared to the 450,000 bpd that Venezuela produced at the beginning of last year, dissipate doubts surrounding the announcement made a few weeks ago by Venezuelan President Nicolás Maduro, that the country’s production was already at a million barrels per day.

For Fernández, industry estimates suggest that for every barrel of diluent that arrive in the country, three barrels of Orinoco Belt oil are produced, and for this Iran’s help has been essential for the recovery in production. “Estimates of oil production in the belt currently add up to 450,000 or 500,000 barrels per day and that is due Iran’s help,” he stressed.

Fernández considers that this increase, together with the sharp rise in oil prices in the international market, is providing significant additional income that Venezuela did not have in the last few years, and is coinciding with the forecasts that state that the country is about to register its first growth in gross domestic product (GDP) in six years.

Venezuela’s rude production has been gradually declining over the last years. In 1999, when the late President Hugo Chávez came to power, 3.2 million barrels were produced per day. This level was more or less maintained throughout the 2000s, but began declining from the beginning of the last decade as oil prices started falling. By the time President Maduro took office in 2013, production stood at 2.5 million bpd. Starting from 2017, US-imposed financial sanctions resulted in a sharp decline of the Venezuelan oil sector, and production level reached a low of an average of 1.34 million bpd in 2018. After the United States sanctioned PDVSA in January 2019 and imposed a total financial blockade on Venezuela, production fell below one million barrels per day.

The Iranian supply, which is sent through veiled mechanisms in order to avoid the consequences of US sanctions, is essential for Venezuela to be able to produce crude oil in the Orinoco Belt, which must be diluted to be sold at the market.

On January 20, 2021, US president Donald Trump, on his last day in office, imposed a series of sanctions against individuals and companies related to this key sector.

Companies from third party countries are also at risk of being sanctioned for violating US-imposed unilateral sanctions, as the US blockade is extraterritorial, meaning it would close the access of third parties to the international financial system that operates mainly in the US dollar. Russian oil company Rosneft was sanctioned by this mechanism, and in March 2020 it divested itself of its interests in Venezuela. However Iran, which was already under US sanctions for four decades, continued to supply diluent to Venezuela.

Experts said that of the nearly 900,000 bpd currently being produced, some 600,000 could be destined for export, despite the fact that the United States no longer does business with PDVSA, and has also directly sanctioned third-country companies that have dared to do business with the Venezuelan state company.

Most of the Venezuelan oil export is being shipped to Malaysian and Singaporean companies via tankers that turn off their satellite-tracking devices to avoid detection, and from there the oil is sold to China, which remains the largest customer of Venezuelan crude.

Iran’s condensate supply is helping Venezuela boost its crude exports, as the country needs the revenue to improve an economy that has been decimated by the US-imposed blockade.

Both Iran and Venezuela have been able to resist economic pressures, gradually finding ways around them.