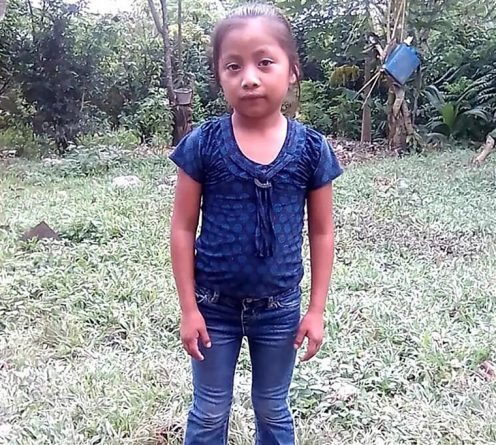 WASHINGTON — A 7-year-old Guatemalan girl who died in the custody of U.S. Customs and Border Protection waited an hour and a half before receiving emergency medical care after showing symptoms, officials said Friday.

Jakelin Amei Rosmery Caal Maquin, whose name was confirmed by CBP and the Guatemalan Embassy Friday afternoon, was apprehended with her father after crossing the border illegally into New Mexico with her family and more than 160 other migrants. Medical personnel are not staffed in the remote area where they were held, known as Antelope Wells, the officials said.

Before the group left Antelope Wells by bus to be transferred to a border station, Jakelin’s father reported that she was ill and vomiting. By the time she arrived at the border station an hour-and-a-half later, she was not breathing. She was revived twice by emergency workers and then transported by air to a hospital in El Paso, Texas, where she died of cardiac arrest with her father by her side.

Jakelin was severely dehydrated; however, officials say that migrants were given access to water at Antelope Wells.

A spokesperson for the Department of Homeland Security said, “Unfortunately, despite our best efforts and the best efforts of the medical team treating the child, we were unable to stop this tragedy from occurring.”

A CBP spokesperson said, “Due to the remoteness of the area, meeting emergency medical personnel [at the border station] in Lordsburg [N.M.] was the best means to provide the child with emergency care.”

In a statement, the Guatemalan Embassy said Jakelin and her family were from the region of Alta Verapaz and their first language was Q’eqchi. “On Monday the 10th, a personal interview was conducted with the father, who seemed deeply affected. We provided the needed attention and he expressed that he wished to say goodbye to his daughter, so we immediately started to coordinate the pertinent process to fulfill his wish.” The embassy said the father was offered legal advice and told about process of repatriating his daughter’s body to Guatemala.

The incident raises questions about CBP’s emergency procedures and the Trump administration’s policy of delaying immigrants at legal ports of entry, forcing them to decide between waiting for weeks to months in dangerous border towns or traveling through dangerous areas along the border.

CBP Commissioner Kevin McAleenan testified before Congress on Tuesday that the border stations were not built to handle children. In November, over 25,000 immigrants crossed as part of a family with children and over 5,200 children crossed without a guardian.

“Our infrastructure is incompatible with this reality. Our border patrol stations and ports of entry were built to mostly handle male single adults in custody. Not families or children,” said McAleenan.

Officials on Friday could not say whether McAleenan knew of this death before his testimony to the Senate Judiciary Committee.

“Due to the seriousness of this tragedy and the many questions that remain, we request you initiate an investigation into this incident as well as CBP policies or practices that may have contributed to the child’s death,” according to a letter signed by Reps. Jerrold Nadler, D-N.Y., Zoe Lofgren, D-Calif., Joaquin Castro, D-Texas, Pramila Jayapal, D-Wash., and Lucille Roybal-Allard, D-Calif.

“The investigation should also examine the appropriateness of holding children in Border Patrol stations, which were never designed to hold children.”

The Office of Inspector General said in a statement that it would investigate the girl’s death.

Immigration advocates have criticized the Trump administration for not properly staffing ports of entry to process asylum claims from immigrants who cross legally and for not doing enough to address the humanitarian concerns of immigrants who make dangerous journey between legal ports of entry.

The humanitarian group No More Deaths has posted videos showing border agents destroying the gallons of water their volunteers leave in the desert for dehydrated migrants.