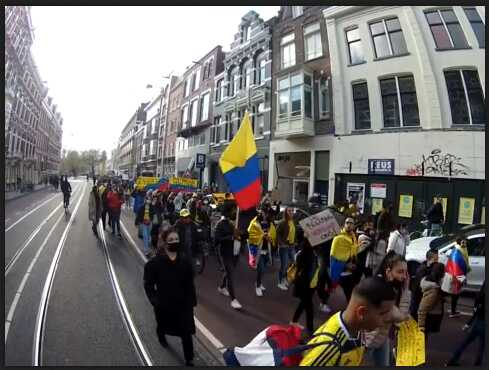 Several thousands marched and protested against the repressive Colombian regime – the Dutch Press agency ANP however counted only a few dozen.

On Friday, May 7, protest demonstrations were announced in The Hague and Amsterdam in solidarity with Colombians who are striking and fighting against the many human rights violations and Neo-liberal exploitation and poverty in their country.

This was prompted by a number of measures that would make life even worse and harder for many Colombians, such as huge VAT increases, petrol price hikes, dismantling of social services, freezing civil servants’ salaries, … and, on the other hand, sharp reductions in the tax payments of large companies and additional state powers to sell off public companies. These requirements of the IMF were the drops that caused many buckets to overflow in the country.

The turnout at these solidarity demonstrations in these major cities was truly overwhelming
In The Hague, about 500 demonstrators gathered in front of the Colombian embassy and chanted slogans against Colombian government policies and the murderous repression of the army and police.

In Amsterdam, about 2000 demonstrators gathered at Dam Square with speeches and two long marches through the city, eventually arriving at the Colombian Consulate. There the demonstration was fairly quickly disbanded because there was no room on the narrow canal side for so many thousands of demonstrators.

In total, several thousand motivated and emotional protesters had come to answer the call. The organization allowed this to proceed in a very orderly fashion.

RELATED CONTENT: Meet the Neo-Nazi Advising Colombian Police on How to Break the National Strike

However, the renowned ANP news agency ‘counted’ and reported only a few dozen demonstrators. None of the newspaper took the trouble, to make any mention of it, let alone mention a more realistic number.

Activists are used to the counts/estimates of the established media always being 5 to 10 times lower than the actual numbers. But so extremely wrong, about 1% of the actual number, is frightening and hopefully not a trend.

Why does this renowned news agency pass on such extremely false information to the Netherlands and the world? Surely something like this cannot last for long? Or is there something very wrong in media land?
Apparently so – for a number of reasons:

RELATED CONTENT: Israel and Colombia: The Ever More Special Relationship

Contrary to the provision of Article 11 of the Constitution, there is no diversity in reporting in the Netherlands. There are no critical independent media and almost no committed professional journalists anymore. Since quite some time already. All newspapers, national and regional, with the exception of the FD and the RD, have been bought up by two billionaire families in Belgium, who dictate what can and cannot be written about. Paid journalists, permanent or freelance, have accepted that their information must correspond to this desirable reporting. A similar situation exists in all other Western countries to a greater or lesser extent.

The General Dutch Press Office (Algemeen Nederlands Persbureau – ANP) was founded in 1934 as an honest alternative to the commercial news agencies. It has offices in The Hague, Amsterdam and Brussels en represents also the press services of Agence France-Presse (AFP), Deutsche Presse Agentur (DPA), EFE (Spain) and Belga (Belgium). However, after privatization in 2000 and several takeovers thereafter, it eventually became 100% owned by Talpa, the commercial film, reality-show and media company of billionaire John de Mol. Although it presents anything but honest information, it is still regarded by the established media as the authority on Dutch and European news.

A handful of sincere and independent journalists living on crowdfunding and donations share their information mostly online on Internet sites that are in many ways barred and made invisible by the Internet services (all owned by billionaires), so they are hardly known. Their messages, reports and analyses are framed by the established media and politicians as dangerously misleading “fakenews. In particular, the two new independent newspapers are targets of slander and ridicule. This hostility is adopted by the people who know no evil.

This impressive Colombia solidarity is withheld from the Dutch and Western-international public because
Colombia – albeit a narcostate – is the Western power bloc’s staunchest regional ally, with nine U.S. military bases. As a NATO partner since 2017, it is involved in military plans and exercises.

Colombia is highly militarized. Both soldiers and para-military have received combat training in the US, UK and Israel, and of Israeli trainers and U.S. Special Forces in Colombia.

Regular attacks on non-aligned states such as Venezuela are carried out from Colombia, and a threat is made to countries that are considering their own independent path. The guidance in this lies largely with the US.

For the Netherlands, Colombia is an essential bridgehead for the control and preservation of the post-colonial islands of Aruba, Bonaire and Curacao, which are still parts of the Dutch Kingdom. Each of those islands is home to a Colombian consulate. Foreign affairs minister Stef Blok’s first trip abroad in April 2018 was to Colombia, in connection with the three ABC islands.

The Dutch government supports hybrid warfare including coup attempts in Nicaragua, Venezuela and Bolivia with the justification that the socialist governments in those countries are repressive, do not allow opposition, use violence against peaceful protesters and violate human rights. These claims were never based on facts and are refuted by numerous reports. That, on the other hand, the Colombian regime does exactly these things, and that there is sufficient evidence for this, does not fit the Dutch government policy. So she tries to conceal and the ANP comes to the rescue.

Featured image: Strong solidarity with Colombia in the Netherlands, with those fighting for democracy and against human rights violations from the Ivan Duque/Alvaro Uribe government. Photo courtesy of Hands Off Venezuela – Netherlands.