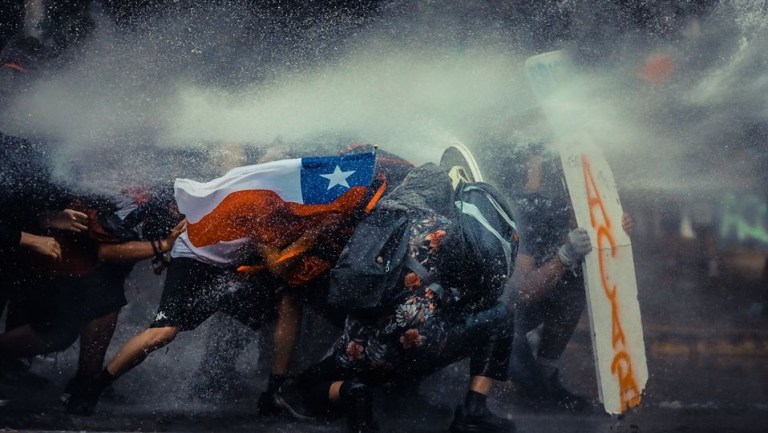 Some say this is a revolution because everything is being transformed from its roots; others say this is a noisy, inter-class and even a plurinational revolt. Some even think an uprising of a new kind began last October betting on continuity to increase its strength. But the truth is that the name of this huge nationwide people’s action touching and holding our attention is not important. It is a perpetual motion of rebellion touching especially those from several earlier generations who also went out to the streets in their era demanding significant changes.

What is important here, as some comrades in other areas of Latin America say, is that you win a battle by fighting it. And this slogan for sure is valid every single day here.

During the last weekend, for instance, people’s rebellion clearly expressed—through the youth (and I would say through teens too)—that they are not willing to stop due to year-end celebrations. These were not days to take a rest.

The dimension of the Chilean police repression is evidenced in the death of Mauricio Fredes, who was running from police violence and was electrocuted after falling into a hole premeditatedly opened in a dark area a block from Dignity Square. Mauricio was a guy beloved in his humble commune outside of Santiago de Chile. He was the classic supportive militant, friendly and committed to our struggle regardless of the consequences. Mauricio’s commitment has been like this since the very first riot against the right-wing Sebastian Piñera Administration, he did not hesitate in taking part in the protests and then joining the “first row” to counteract and defend the protests from a police force so violent that it can only be compared to Colombia’s ESMAD, Spain’s Civil Guard or Zionist soldiers.

Last Saturday, when 30-year-old Mauricio’s corpse was still at the morgue, his comrades and other people moved by his death (not accidental at all as the yellow journalism reports, but deliberate) joined in an improvised candle vigil, the police came out again to prove they are willing to exterminate anyone at the orders of their commanders. They came up with at least eight armored vehicles and a water cannon filled with chemicals. They sprayed and gassed the small groups that were just lighting candles and bringing flowers in his honor. The same sadism they usually use as weapons were once again deployed on these unpunished subjects. All those attending the morgue were crushed by the police and a woman who was offering flowers with her 10-year-old daughter fainted due to the water cannons and tear gas. The little girl, desperate, crying, got closer to her mother’s body and in that precise moment a monster in uniform charged again with a powerful water cannon, moving and hitting her small body. The girl is seriously injured today and she will probably suffer motor disabilities from the attack. What about the political class? Silence. What about the media? Silence.

This is the situation now where about 2,500 and 3,500 people are political prisoners and there are a large number of disappeared victims and where genocidal soldiers from the Pinochet era were never punished.

Moreover, news came from Viña del Mar about the death of another young guy in the front line who had been run over by a vehicle in very unusual circumstances He was called Lian and his kind face agrees with the stories told by his comrades about his desire to fight so that those who are born today do not endure the shortfall of this repressive neoliberal cesspool present.

But homage was paid to the fallen throughout the streets of Santiago, proving that this Revolution is equipped with an abundance of solidarity among these warriors. From a giant bicycle ride with indigenous Mapuche and Chilean flags denouncing murderers and their intellectual promoters to chants in front of the morgue as those that Mauricio probably sang. Then, when the family was able to recover Mauricio’s corpse following long hours of bureaucracy, the bikers’ caravan and other people in cars or by foot went to the house of this front row combatant. There, surrounded by the despairing cry of his comrades, chants rang out that “bullets they shot will go back” and that “people united will never be defeated,” and songs written in these days of rebellion were sung with guitars by some and with harmonicas by others. What’s more, famous Latin American singer Anita Tijoux, whose songs are a tool of denunciation and resistance, joined the gathering to pay homage too. For a moment, sorrow turned into a recital, just as Mauricio would have liked.

This is the current situation in this vital and awakened Chile, where youth are giving life an unforgettable lesson. Convening themselves and determined to give their best, their body and their desire for a real change. Without leaders as those, we met in previous generations, with too much theory but with a vital expression of intelligence to not let the struggle decline.

This story is being written amidst tear gases, the eyes burning and almost blinded, running from water cannons and from police clubs. I tell myself at this moment we are where popular journalists should be, at the side of this homeland that is becoming more enlightened every day. There are others in motion too on this continent which the US Empire thinks they have completely conquered. They are wrong. Our surroundings and the words written on the walls of Chilean cities are enough to explain and confirm it. “We will not give up because we stood forever,” or the words written in the place where Mauricio died, quoting The Little Prince: “What is essential is invisible to the State.” For these reasons, in a year or ten, this rebellion is compelled to win. And who would say now that it may not turn into a revolution. At least in cultural matters, in the broad sense of this term, it’s already changing everything.