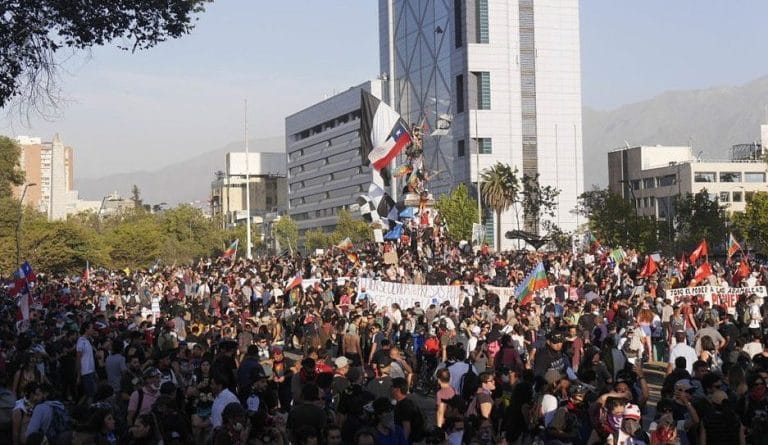 A very special battle took place on the last Friday of 2019 in Chile to recover the Plaza de la Dignidad. Those who are experienced in street struggle since the first riot last October knew about the presence of a large amount of Carabineros officers (pacos, as they are called by most Chileans) since the early afternoon. With their traditional armored cars ready to fire high powered water containing all sorts of poisonous chemicals, some on their horses or on motorcycles and others in vehicles, the pacos seemed prepared to unleash another round of brutal repression on the scene.

In a nearby square, a potluck made by the Workers Class Union served food for those young participants who would later be in the front row of the fight. A few minutes after serving pasta with tomato sauce, police officers arrived to check the backpacks of several young people who were eating on the grass. Shouts were heard as the pacos on horseback were arrogantly riding through, “You pacos are assholes why don’t you leave us alone” or “we’ll see you in a little while.”

Young people started gathering in the different corners of Dignity Square, banging on pots and pans and singing their chants. The intention was evidently to occupy Dignity Square once again. Suddenly, without any provocation, a water cannon started to fire on a group of boys and girls and the confrontation began.

From that point on the place filled up with tear gas, people running all around, and indigenous Mapuche and Chilean flags hoisted everywhere. Right at that moment from the top of a building, the Dignity Square radio station started broadcasting and as soon as they heard the voice of one of its hosts, young people who were running and dodging the powerful water cannon bursts into applause and more shouts. The radio station had accomplished its goal set by the group of militants who had brought it into operation, joining the struggle to denounce the repression of the dictatorial Sebastian Piñera regime. Rebel music started to play again and the street stirred up again at the rhythms of local songs and the loud noise of the tear gas bombs. A radio speaker told us that “scores of singers and all sort of groups are sending their music with lyrics related to street struggle against the system to them, to encourage protesters in hard moments of police repression.”

In the streets, scenes led by the youth are unforgettable for those who were there. Girls and boys dancing while evading water cannons, while others were picking up tear gas bombs and sending them back to the groups of police. Medical attendants with their typical red or blue crosses painted on their helmets alleviating the effect of the gases with water and bicarbonate or lemon juice. “People united…” chanted the north corner; “Asshole pacos,” said those in the front. Meanwhile police lines all at once came together and created an unbearable climate of harassment that would only be broken by the heroic “front-row,” containing the attack with their slingshots and rubble. Officers were also faced by young girls who were insulting them or recalling that they too came from humble origins and that they were beating people who could be their own brothers or sons.

All of a sudden, someone gave an alert and a large number of people came marching with flags, whistles and pans through Alameda Avenue, only three blocks from Dignity Square. They were needed backup, organized to untie the battle, which had been suffocating at times. The march was made up of young workers and students, plenty of women and even elderly who brought banners which read: “We support our grandchildren who are the casualties and are willing to sacrifice their eyes.” Besides withstanding the pressure of tear gas bombs and water cannons, a big incendiary of some type impacted on the Alameda Arts Center and caused a huge fire. The street shouted “murderers, murderers” in unison, as well as the traditional chant “the bullets you shoot will go back to you.”

The grenade causing the fire came from the surroundings of the Carabinero monument, which is usually protected by a group of officers. A “front row” group immediately gathered in the place and started to fight back the attackers who continued filling the area with more tear gas. Then the plan to continue moving towards Dignity Square spread among protesters. Soaked by the water cannons, their eyes in tears and angry due to so much repressive impunity, the crowd started to move faster. Together with the “front row,” marchers pushed police officers outside the square and took possession of it, including the monument. On the top of it, as it had happened since October, the Mapuche flag was hoisted together with Chile’s flag, and even the flag representing a famous soccer team.

Then the liberated square turned into a giant party: more music, more dancing, and plenty of hugs for the victory and satisfaction of having recovered the symbolic place. “Where are the people? They’re in the streets fighting for their dignity,” repeat those on the top of the monument. Just a few dared to take off their masks and goggles they used the entire evening, as tear gas bombs continued to be heard in the surroundings as the wind tends to blow directly into the Square. But this is not quite as important as the main goal of the day that had been achieved. Unfortunately, the party received bad news: a young boy running from the Carabineros force fell inside a deep hole in Alameda Avenue, dying right away. This news of another casualty reactivated the confrontation in several areas of the city and blockades were set up until very late at night.

Experiencing all this, between people running around and suffocating moments, the conclusion can only be that resistance in Chile today is little by little becoming an uprising. It is directed against the establishment; against repression; against brazen politicians; against Piñera’s government that should have already resigned but continues repressing its people and which is less and less backed by Washington. This movement is headed by a generation of youth disbelieving the politics they’ve lived so far, made of politicians who can be to the right one day or join some sort of “left” another day but who implement the same wild capitalist packages as soon as they take office. These young people are building a doctrine in Chile’s streets that doesn’t copy or imitate the past. This does not mean that there is not a legacy from those who fought in the past but events today have a different creativity and innovation and we have to wait to see what unfolds from it. Meanwhile, the struggle goes on and new battles will come, as well as expressions of solidarity among those outside who are constantly explaining the Chilean awakening as the example of a contagious torrential river and is encouraging to anyone who is lucky enough to come close to this new stage of America’s rebel territory.