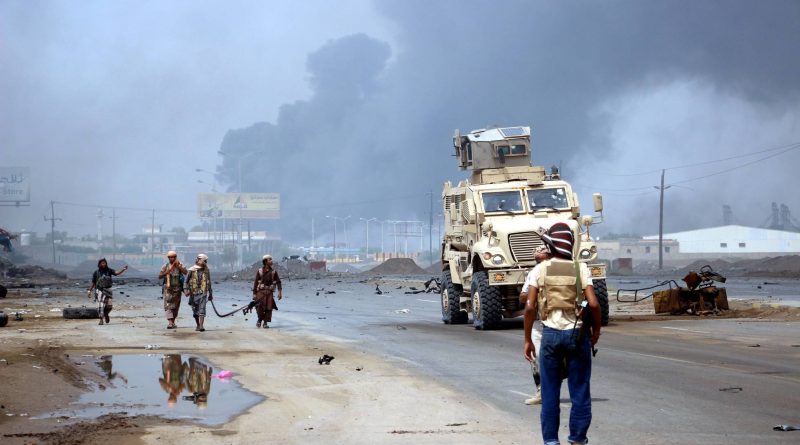 Editorial Note: El Pais is one of those media outlets supporting the US “regime change” operation in Venezuela. We have a rule of not helping them spreading their lies but this piece is too important for documenting the international campaign against the Yemeni people.

The Defense Ministry will have to buy back the shells for more money than the Saudis paid.

Spain secretly supported the Saudi-led military intervention in Yemen through its controversial sale of 400 bombs to Riyadh.

The contract was signed in 2015, under the previous administration of Prime Minister Mariano Rajoy, of the Popular Party (PP). Under the terms of the contract, the Spanish army would sell 400 US-made laser-guided missiles to Saudi Arabia. Riyadh has already paid the full sale price of €9.2 million.

When the Socialist Party (PSOE) took power in early June, Defense Minister Margarita Robles suggested that the sale might be halted due to concerns over the use of the bombs in the Yemen war. Riyadh responded by threatening to cancel all its contracts with Spain, including the construction of five warships at a shipyard in Cádiz. Workers staged public protests and the government backtracked, saying the sale would proceed.

But the Spanish Defense Ministry will have to replace those bombs, probably for more than the €9.2 million that Riyadh paid for them, because they were part of the army’s own reserves, which must be replenished to meet contingency plans.

If it does not sound like good business, that’s because it was never meant to be. “It was a political decision used by Spain to show support for the Saudi-led coalition in the Yemen war,” said a former high-ranking official with the PP government. The Rajoy administration kept this decision under wraps.

The PSOE government’s mishandling of the recent crisis has drawn attention away from the original fact: Spain entered into a secret and atypical arms sale contract that leaves many questions unanswered, such as: Why did Spain sell US-made bombs that were the property of the Spanish Defense Ministry, when typically the seller is the manufacturer? And why had Riyadh not yet bothered to collect a shipment bought in 2015, whose last installment was paid in January of this year?

Sources familiar with the transaction have told EL PAÍS that it was not merely an arms sale, but a way to provide logistical support to the Yemen intervention. It was something similar to Spain’s support for US air strikes in Syria, except that Riyadh does not need foreign bases to attack its neighbor to the south.

International coalition
In March 2015, the Arab League approved the creation of an international coalition led by Saudi Arabia to support Yemeni President Abdrabbuh Mansur Hadi against the advance of the Houthi rebels, a Shiite minority backed by Iran. On April 14 of that same year, the UN Security Council passed a resolution that did not authorize the military intervention but that took sides by decreeing an arms embargo against the Houthi.

The international coalition was made up of Arab countries, which supplied the troops, and backed by Western powers. And not just politically, either: the US and Britain have admitted that they supplied Riyadh with guided missiles and intelligence assistance.

Spain offered 400 laser-guided bombs (100 GBU-10 and 300 GBU-16). The army was ordered to part with them, even though the bombs were part of its own war reserves and would have to be replaced to meet contingency plans. The Defense Ministry will have to buy replacements as soon as possible.

Unlike Washington or London, Madrid did not publicize its support for the Yemen intervention. The contract was signed in May or June 2015, six months before a general election. But the decision to keep the contract secret was not made out of domestic policy concerns, says a diplomat who held a position of responsibility at the time.

“We all knew what side we were on, but we had to straddle the fence. We wanted to maintain good relations with Riyadh without falling afoul of Tehran,” said this source.

When the Arab League approved the creation of an international coalition for Yemen, the Spanish Foreign Ministry called it “a very significant step in support of the country’s institutional legitimacy,” and underscored “the driving role of Saudi Arabia […] a friend with whom Spain maintains very close and fraternal ties.”

At the time, it was thought that the Saudi-led campaign would be a walk in the park. Three and a half years later, the war has caused more than 10,000 deaths and created a tremendous humanitarian crisis. When the new PSOE government took power in Spain, it did not take into account that suspending the sale of the 400 bombs to Saudi Arabia in fact meant withdrawing Spain’s support for the Yemen intervention.