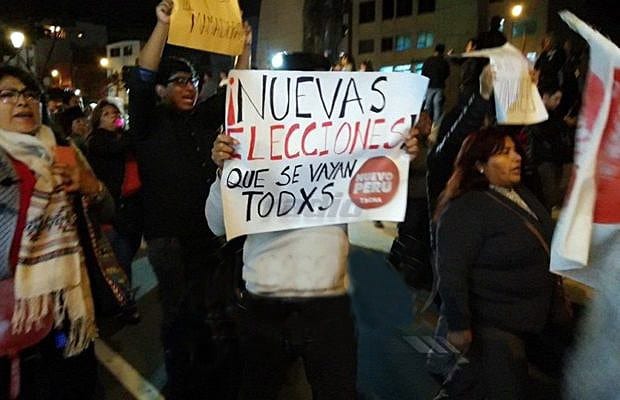 By Gustavo Espinoza M.,Yes, finally the demands of the citizens have come into play. Peruvian President Martin Vizcarra, cornered by the mafia of Fujimori supporters and the Aprista movement, has decided to dissolve the Congress of the Republic and convene new parliamentary elections next January 26.

This is an action that would be considered completely legitimate and rational in Spain, England, or France is being objected to in the South American country by the most reactionary groups and is being branded as a “Chavista” measure. So instead of accepting it, right wing congress representative here decided to imitate the Venezuelan contras and proclaimed a Peruvian version of Juan Guaido by declaring Mercedes Araoz as “President,” a person with loathsome precedents. People here call her “Miss Bagua,” alluding to her participation in one of the bloodiest episodes in recent Peruvian history. By then, however, it was too late for those corrupt politicians who were afraid of losing parliamentary protection for their crimes because Vizcarra, with the support of the military and police, had closed Congress.

It is safe to say that this crisis was foreseeable. The mafia’s obsessive effort to seize every resource of power, whatever the cost, subduing all kinds of resistance by force, needed to have an intervention and the population understood this. So it began in the streets and squares across the country, the demand the end of the cycle and closing of the National Parliament.

RELATED CONTENT: The Government of Peru Puts a New Cabinet into Operation

During the last weeks the crisis came to a boiling point when the Congress proposed to free opposition leader Keiko Fujimori, who was in pre-trial detention, and to finally monopolize the Constitutional Court through an “express” procedure carried out in just 30 minutes. And when the Congress seemed to be tired out, it simply decided to shelve the bill proposed by the Executive to bring forward general elections.

This latest action became a turning point due to its content and form. Its content included their rejection to a rational and constitutional solution to the crisis. And its form unveiled the nerve of arrogant and frightened deputies who, instead of issuing a verdict and presenting it to the plenary of Congress for a debate, they decided to “shelve” the initiative with the vote of 13 out of 130 congressional representatives. This decision in and of itself would make the agreement illegal. Nevertheless, they tried to implement it completely out of touch with reality.

The decision taken by President Vizcarra to dissolve the dysfunctional Congress answers a need raised in the struggle against corruption but also gives an opening for mass participation of the population. The decision was welcomed by almost a million Peruvians in all cities of the country, going out to the streets first demanding the measure with a high level of enthusiasm.

While the measure is good and deserves active civic support it is not going to make everything right. This is an essential step in the struggle against a vile mafia about to be defeated, backed today just by CONFIEP —a confederation of business people always acting in the service of their own interests—, but this is not the solution to the problems overwhelming the country. Those are much more serious and they will only be faced when Peruvians are really able to transform the current system.

There are three challenges that need to be addressed in the immediate perspective: the voiding of the validity of the dictatorial Constitution, imposed by fraud and arms; ending the unconditional adhesion to the neoliberal “model” that is crumbling into crisis in the country; and ending the obligation of a foreign policy ordered from Washington and which is in reality handing over our independence and sovereignty.

These are major requirements among the people’s demands amidst the struggle to dissolve Congress. And they need to be fulfilled so that the movement can gain strength. It will entail a preservation of our productive structure, defending our energy resources, and using the capabilities of our country for the benefit of the national development and progress. It should all happen. A Constituent Assembly is necessary to draft a new Constitution according to the demands of our reality.

The mafia at this point thinks they can still survive. They are not going to just give up. They will not only try to recover lost positions but they will also long for revenge against those who defeated them. They will call on the Organization of American States (OAS), and hope that Mr. Almagro will come to tell them they are right. And that distracted governments from other parts of the world will “recognize” Mrs. Araoz as the “President of the Republic.”

The ball is in play. The game is not over yet. The struggle of our people will continue its path with bravery and sacrifice and in the end will be decisive.