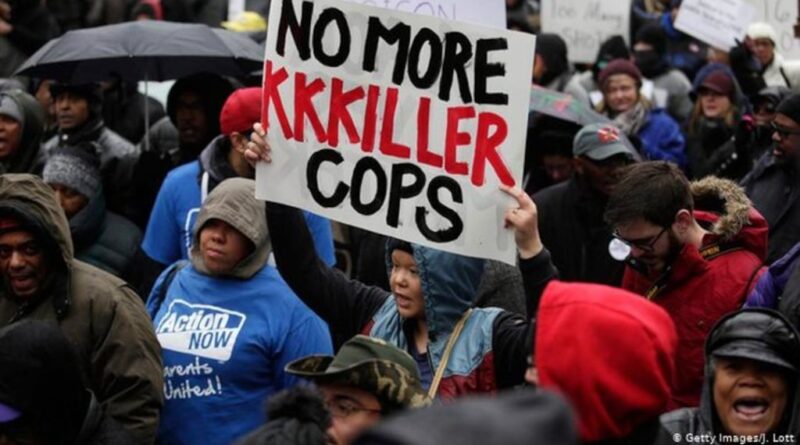 “The State and Revolution” was written by V.I. Lenin in 1917 during the Russian Revolution on ”the most urgent problem of the day … the problem of explaining to the masses what they will have to do to free themselves from capitalist tyranny.” Still relevant.

Lenin describes what Karl Marx and Frederick Engels said about the bourgeois state during the early period of capitalist development in Europe. The state was literally choking society, referring to how large and quickly the instruments of repression and bureaucracy had grown.

In today’s global capitalist system, the capitalist state is even more monstrous, with its gargantuan growth and its repressive forces.

Today’s “armed bodies” include not only police departments in every city, county and state, but also Homeland Security, Border Patrol police, Immigration and Customs Enforcement agents, sheriff’s departments, the FBI and the National Guard. This does not even account for the vast prison system, both private and public, the juvenile jails, immigration detention camps, the vast court system that protects and upholds capitalist law or all ot the imperialist apparatus used to control and colonize oppressed people around the world — some 15 different major spy agencies including the CIA and National Security Agency to all sorts of operatives, both public and private, legal and illegal, as well as assorted special forces. Plus the Army, Navy, Marines, Air Force and the entire Pentagon apparatus on more than 5,000 known military bases and installations around the world.

RELATED CONTENT: Two-Thirds of Americans Believe US Handling of Pandemic Worse Than Other Countries – Poll

As class antagonisms develop, as the divisions in society between exploiter and exploited, of oppressor to oppressed grow larger, so does the repressive force of the state grow.

Class character of the state

Lenin writes that Marx and Engels viewed history and the development of the state from the lens of material conditions and class struggle. They understood that the state is not a divine power that fell from heaven (or more aptly hell) but from the development of classes and economic conditions, that its purpose is to maintain, preserve and protect whichever class holds power.

Today’s class of millionaires and billionaires and potentially even trillionaires is a tiny group in comparison to the vast global working class. They could not preside over and perpetuate a system of exploitation that has led to extreme levels of impoverishment and misery without both a complex and sophisticated political machine, “a body separate and above” on the one hand; and on the other hand without the machinery of repression: police, prisons and the military.

Lenin thoroughly debunked the myth that the state is an independent entity remaining neutral and playing the role of reconciling differences between classes.

Take the modern-day U.S. police apparatus: Part of its DNA is historically rooted in the early slave patrols used by the Southern landowners to hunt down runaway slaves. While policing has deeply expanded and evolved, its purpose as an occupying army in the most oppressed communities has not changed.

The Constitution, a document that’s revered and worshiped in almost every kid’s history book, is dripping with blood and hypocrisy. While the “founding fathers” spoke of “freedom and inalienable rights,” they were simultaneously butchering Indigenous people and stealing their land. The Constitution was written by and for wealthy white landowners and mercantile capitalists and as such did not even pretend to be for universal suffrage. It did not include Black people, women, Indigenous people or anyone who was not white and wealthy.

Back to the present millionaires and billionaires: today’s capitalist economic crisis, pushed over the cliff by the coronavirus pandemic, will undoubtedly reveal even more what the true predatory role of the capitalist state is to millions of workers.

It won’t be the owners of Bank of America who will throw workers and their families out of their homes and apartments, but rather sheriffs and police departments.

When people are hungry, supermarket CEO’s and agribusiness executives won’t stand in front of the warehouses storing food — instead they will order their capitalist policy makers to call out the National Guard and cops to defend “their private property.”

Read and study “State and Revolution”

Most of the accounts of Lenin’s personality depict him as a person lacking in vanity. So it’s doubtful that today he would be on a soapbox yelling “I told you so.” Lenin was fervently and single-mindedly committed to serving the working class and oppressed and making revolution.

It’s more likely that if Lenin were alive, he would be at the barricades in the George Floyd uprising. On the streets in the daytime and at night writing on the necessity of finishing the revolution for Black liberation, connecting the fight to capitalism and calling for socialism.

Lenin might have even been picked up and kidnapped by Homeland Security in some city like Portland or Chicago. He was arrested several times for his political activity.

But Lenin isn’t here today, so the next best thing we can do is to review, read and study “The State and Revolution.”

If you are new to reading Lenin, don’t give up if the style seems old fashioned and alien to today’s political period. Instead, read to understand the concepts.

The pamphlet “The State and Revolution” is not only a clarion call to revolution and the abolishment of all the hated repressive apparatus of class oppression; it was also Lenin’s own meticulous and detailed study of Marx and Engels writings on the state.

Struggle-La Lucha and the Socialist Unity Party invite you to attend our classes and study Lenin’s “The State and Revolution.”

We will not only be reviewing how Lenin’s theories apply to the current struggle against racist police terror but also to the capitalist elections. Can the police be reformed? What is capitalist “democracy” versus workers’ democracy? What did Marx and Lenin learn from the heroic Paris Commune and the communards who “stormed the heavens”?