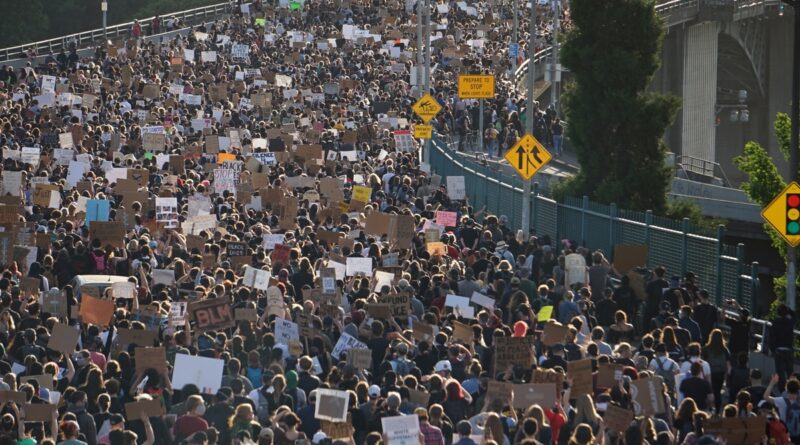 The protest has emerged following the murder of George Floyd, a Back African American in Minneapolis by the police, in conjunction with the black lives matter movement, to create a political Street protest which is determined, through peaceful, non-violent protest, to facilitate change in the American system of the administration of democracy.

In an interview with David Rovics, a renowned singer-songwriter and poet, we learn of the history of The Portland protests it’s aims and its ongoing mission to effect change.

David has lived in Portland with his wife and young family for over a decade and has witnessed his rent increase by over 250% during that time.

There are people from a wide selection of societal backgrounds, many now unemployed, some homeless, many working two or three jobs to save the finances needed to pay the rent.

The current difficulties faced by the poor and working poor in America and even sections of the lower middle class are compounded by the COVID-19 pandemic, which is so badly mishandled by the American regime.

It is devastating working-class and lower-middle-class American jobs, with the result of more than 23 million people being unemployed. In America, the eviction rates by landlords who haven’t received their rent will soon reach record levels.

Portland is one of the main cities in America where a majority of the available accommodation is not owned by the people who live in Portland but by landlords.

It has a huge rental sector.

It is one of many cities in America which may continue to see sustained protests as America emerges from the COVID 19 Pandemic.

The black lives matter movement seems to lack a clear and coherent political message outside of calling for an end to modern-day brutality against the Black African-American community from the state and state employees, mainly in the guise of the police.

‘Four years ago, what is now known as the Black Lives Matter Global Network began to organize. It started as a chapter-based, member-led organization whose mission was to build local power and to intervene when violence was inflicted on Black communities by the state and vigilantes.’

Racism is rampant in the United States of America which is becoming increasingly disunited by the day.

The racism on display every day in America and every facet of society is not only against black Americans but Asian and brown Americans.

It is the working class of America who has made America great but not for themselves, their families, their children or grandchildren but for the rich, the powerful, the elite and the political class which enables the destruction of the American base by sustaining the class structure at the top.

When the people unite against oppression, discrimination, racism, classism and the squandering of wealth by the few, redistributed to the many, to promote a more equitable society we may well witness the end days of poverty, illiteracy, homelessness, job insecurity wage poverty, absolute poverty and the working poor but also an increase in life expectancy, well being. and preventable deaths

Black, Asian and brown people are being jailed at a higher proportion than their white contemporary.

From the outside, the black lives matter movement appears to lack a political agenda whereby they would stand in elections and tried to change the system or alternatively offer the black Asian and brown community in America the opportunity to vote for someone other than the Republican party and the Democratic party who in practice do not embrace the politics of equality or the politics of justice or the politics of anti-racism.

The protests are mainly centred around the inappropriately named Court of Justice.

In conversation with David, it appears the ongoing nightly protest ‘ebb and flow sometimes in reaction to what has happened at other protests or indeed if there is unwarranted brutality by the police and federal officers in Portland.

The Federal police have been drafted into Portland and according to David ‘are systematically arresting people on the streets, putting them into private cars almost like a snatch squad’ they pull up in an ‘unmarked cars, it is not obvious that they are the police or members of the State militias and grab people off the street, put them in their cars and take them away’

It is similar to the actions of the death squads in Latin America, reminiscent of how the Israeli regime attacks Palestinians and reflective of how the Mafia dealt with people who would oppose them.

As the people of Portland gather nightly at the Courts of Justice they hold peaceful rallies and protests, the police hold these rallies to be illegal and throw sound bombs, flash grenades and fire tear gas canisters at the protestors. Many of whom are then arrested, not for violence or violent conduct but for simply protesting against police brutality which is then revisited upon them each night and so It goes on night after night.

How long these protests can continue is difficult to guess. Without a coherent list of demands that the state can meet, the main difficulty facing these protests will be the possibility that they are co-opted by the Democratic party in order to gain votes in the Presidential elections in November, or the state may give minor concessions to manage the dissent and encourage the protest to end but without any real significant sustained change to its racist practices and policies?

Every political movement, every social movement needs a victory from time to time to sustain morale, commitment and energy.

I fully support the black lives matter movement. I fully support any movement that is engaged in a radical change of the American system, which discriminates against the working class and the poor regardless of their colour, against Blacks, Asians, Mexicans, Latin American and Caribbeans. I believe unless a radical political movement is born out of the black lives matter engagement in Street politics at this time, amid the reawakening of the American people, and the thirst for justice, we will just have street protest followed by state violence, repression, prosecutions and incarcerations.

In contrast to America being run on behalf of corporations, the banks, the elite and the military-industrial complex, that encourages military interventions, disguised as humanitarian aid to occupy and sanction other sovereign nations countries throughout the world, now is the time to end American Imperialism from a grassroots-led, Street Awakened, mass consciousness movement.

A revolution is coming to America. Not the Revolution of 1776 but a Revolution of 2020 that may lead to an America of equals, through the destruction of capitalism which, since 1776 has destroyed America and other parts of the world

here is the podcast interview with Daivd Rovics.