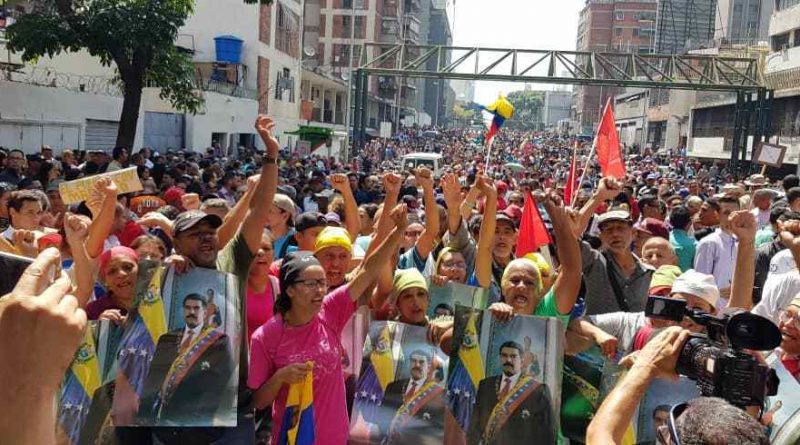 Struggle-La Lucha condemns the latest U.S.-inspired coup attempt against the Bolivarian Republic of Venezuela and its legitimate government headed by President Nicolás Maduro.

There is no question that today’s attack on Venezuelan sovereignty, in which pretender Juan Guaidó and a small group of military defectors called for the Bolivarian Armed Forces to overthrow President Maduro, is inspired and coordinated by the Trump regime on behalf of the entire U.S. imperialist political establishment.

We join in spirit with the tens of thousands of Chavista workers, peasants, students, women, LGBTQ2S, Indigenous and Afro-Venezuelans who have poured into the streets of Caracas to defend President Maduro and the gains of the Bolivarian Revolution initiated by the late Hugo Chávez.

The military coup was planned long beforehand, as evidenced by the immediate statements welcoming the coup attempt by the governments of the U.S. and several of its right-wing lackey governments in Latin America, including Brazil, Colombia, Peru and Chile.

Meanwhile, an ultraright mob of Venezuelan contras was mobilized to threaten fascist violence against the courageous defenders of the Bolivarian Venezuelan Embassy in Washington, D.C. We are proud to participate in the Embassy Protection Collective, a group of activists whose offer to defend the embassy was accepted by the legitimate Venezuelan authorities.

The coup attempt is a sign of desperation by Trump and Guaidó, who have been unable to pull off a successful counterrevolutionary uprising against the Bolivarian government after months of attempts, including punishing sanctions, seizure of international assets, bogus “humanitarian aid” propaganda, sabotage of the country’s electrical grid and threats of direct military intervention.

The suffering of the poorest Venezuelans, caused by U.S. sanctions and sabotage, is real. According to a report released April 25 by the Center for Economic Policy and Research, at least 40,000 deaths can be attributed to the U.S. sanctions from 2017 to 2018. Yet the people of Venezuela stand strong in defense of their independence and determination to fight for a socialist future.

Tomorrow is May 1 — International Workers’ Day. We call on the workers and oppressed people of the U.S. and the whole world to make May Day HANDS OFF VENEZUELA DAY! No to sanctions! No to coups! No to U.S. or proxy military invasion!

U.S. police and fascists — Hands off the Venezuelan Embassy!

All out to defend the Bolivarian Revolution!