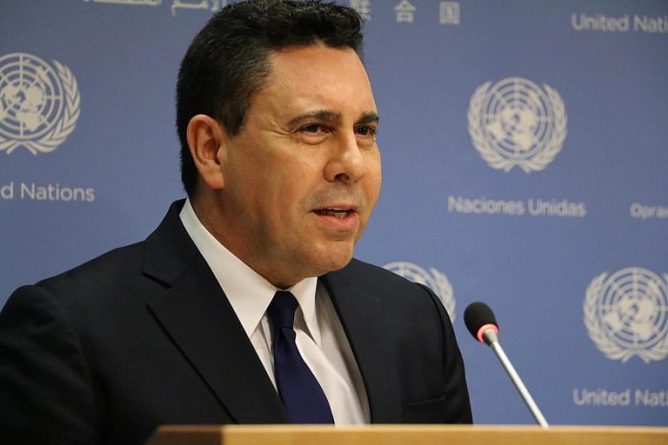 The ambassador of Venezuela to the United Nations, Samuel Moncada, stressed that the constitutional government of President Nicolás Maduro defeated a new US attempt. of «creating a civil war » in the South American country. In a press conference at the agency’s headquarters in New York, he called on the international community to reject “this violent attempt at a coup d’état”, saying it violates the entire “Charter of the United Nations and undermines peace” in the region.

The diplomat reported that 25 of the military personnel who participated in the attempted coup demanded asylum in diplomatic offices of the countries that support opposition deputy Juan Guaidó.

He also indicated that opposition leader Lepoldo Lopez, who was illegally released from house arrest, is “hiding” at the Chilean embassy in Venezuela, where he is seeking asylum. Minutes later, the information was confirmed by Chilean Foreign Minister, Roberto Ampuero.

Moncada said that what happened in Caracas is the “typical American coup in Latin America, but failed”, but said that the Bolivarian government controlled the action with full respect for human rights and without material damage.

“I feel very proud that something that was very dangerous, has ended without any life to regret,” he said about it.

What will happen to Guaidó?
On the future of Guaidó, Moncada indicated that the Venezuelan prosecutor’s office will take the pertinent actions: “It is evident that this man committed a crime.” The official also questioned that the Secretary General of the United Nations (UN), Antonio Guterres, has declared himself “impartial” with what happened in Caracas, given the seriousness of the actions led by the opposition.

He noted that Guterres, as secretary general of the organization, “has a duty to ensure the stability” of the legitimate government of Venezuela, led by President Maduro. At the same time, he asserted that the coup attempt should be sufficient reason for a call by the UN Security Council. “We are anxious to expose the criminal attempts against our country,” he said.

The facts
On Tuesday, López was removed from his house arrest in Venezuela, following an action led by Guaidó with the backing of a small group of Venezuelan military and security officials.

López, who was with Guaidó at the Altamira Distributor, located near La Carlota Military Air Base, wrote on his Twitter account that “the definitive phase for the cessation of the usurpation, Operation Libertad” had begun. He also announced that he was “freed by the military and by President Guaidó.”

Guaidó, for his part, affirmed that his actions have always been “framed in the Constitution, in the nonviolent struggle”. Earlier, in an interview with RT, Venezuela’s communication minister, Jorge Rodríguez , explained that the minority faction of the military, supported by supporters of the right, attempted a failed coup d’etat against Maduro’s government.

“Nerves of steel”
The Venezuelan president, Nicolás Maduro, asked people to have “nerves of steel”, through his account of the social network, and said that all the commanders of the ‘Strategic Operational Command of the FANB’, known as REDI, and of the ‘Zones of Integral Defense ‘(ZODI) manifested their loyalty “to the people, to the Constitution and to the fatherland”.

Meanwhile, the Minister of Defense, Vladimir Padrino López, stated that ” the FANB stands firm in defense of the Constitution and its legitimate authorities” and that “all military units” report normality. ”

In the same way, the heads of the Venezuelan public powers issued statements. The president of the Supreme Court of Justice (TSJ), Maikel Moreno , affirmed that the judiciary will “comply with the stipulations of the legal system. In addition, the Attorney General, Tarek William Saab , said that the Public Ministry will act firmly to these facts. For its part, the president of the National Electoral Council (CNE), Tibisay Lucena , condemned the “undemocratic attitude” of those who “try to snatch the will of the Venezuelan people”, who re-elected Maduro as president last May 2018 with the 67 , 84% of the total votes, with a participation of 46, 07%.