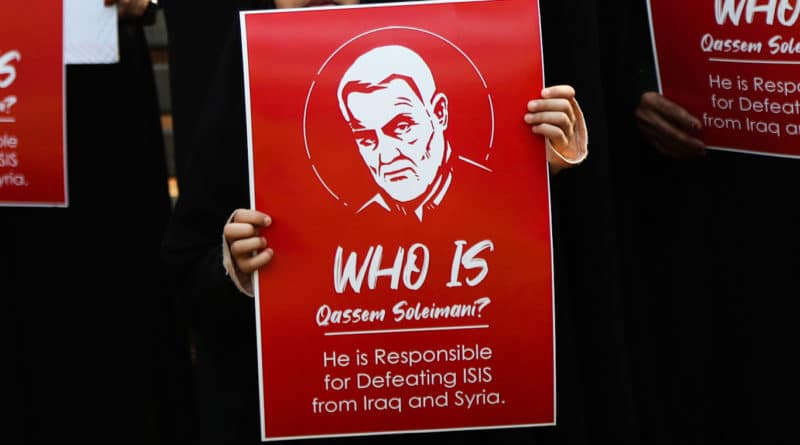 A social media disinformation expert studied 60,000 tweets from nearly 10,000 accounts using the hashtag #IraniansDetestSoleimani and found that the most common phrases in those users’ biographies were “Make America Great Again” and “Trump.”

The hashtag #IraniansDetestSoleimani has been trending on Twitter this week, as users voiced their opposition to the recently assassinated Iranian military leader Qasem Soleimani. The hashtag remained one of the most popular amongst users in the U.S. and Western Europe. But similar viral sentiment was not expressed across the Middle East, least of all on Iranian Twitter, leaving one to wonder, who are these Iranian Soleimani haters?

The story became stranger still after Middle East and social media disinformation expert Professor Marc Owen Jones of Hamad bin Khalifa University in Qatar analyzed the trend. Jones studied 60,000 tweets from nearly 10,000 accounts using the hashtag and found that the most common phrases in those users’ biographies were “Make America Great Again” and “Trump” – not somebody noted for his support among Iranians, or Muslims more generally. He concluded that “once again that the online right wing MAGA movement is boosting the trend that seeks to indicate that Iranians actually hated Soleimani.”

Some strange, but unsurprising things about the incredibly voluminous hashtag "Iranians Detest Soleimani" (via @maasalan ), I sampled around 60,000 tweets from around 9753 account using the hashtag. The most common noun among biographies was "Make America Great Again" & "Trump" pic.twitter.com/I0uqq5WuEo

Jones also studied the most frequent users of the hashtag, those who were most vociferously voicing their opposition to the recently slain general. He found that they had typical machine-generated usernames with a common first name followed by a string of numbers, and had extremely generic profiles, with little personal data and default, plain displays on their page.

3/ Incidentally the sample was from around 16:00 UTC on 6th January until 7th January pic.twitter.com/BUuSJzvu5t

This is an increasingly common occurrence in conflicts, as groups attempt to control the narrative on the new online battlefront. In November, during the midst of a U.S.-backed coup against President Evo Morales, thousands of newly created bots boosted a Spanish-language hashtag #BoliviaNoHayGolpe – in English meaning “there is no coup in Bolivia” – attempting to legitimize the ouster of a democratically-elected leader. In Venezuela, too, the local U.S.-supported opposition attempted to increase their popularity and reach through manipulation of Twitter. In October, a senior Twitter executive, Gordon MacMillan, who was the editor for the Platform for the Middle East and North Africa (including Iran), was unmasked as an officer in the British Army’s 77th Brigade, a unit dedicated to psychological operations, propaganda and online warfare. These incidents are some of many that underline how governments and other powerful organizations increasingly see the Internet as a battlefield for public opinion.

Although major American media have labeled Soleimani as a monstrous “blood-soaked,” “terrorist mastermind,” “as evil as Osama bin Laden,” there is little evidence to suggest most Iranians share the same opinion. A 2019 survey by the University of Maryland found that “General Soleimani remains the most popular Iranian public figure,” with 59 percent of the country viewing him “very favorably” and over four in five of his country folk having a positive opinion of him overall. This was true across age ranges.

The tense Iran situation threatens to spill over into war. While backing away from military retaliation, President Trump has vowed to place further sanctions on the country. The U.S. also accuses Iran of shooting down a Ukrainian International Airlines flight that crashed near Tehran Wednesday. A poll published Wednesday by Morning Consultant showed that a plurality of American respondents (47 percent overall) supported the drone assassination of Soleimani, although they agreed it made America less safe. Despite this, only 23 percent could locate Iran on a map of the world and only 28 percent could find the country on a zoomed-in map of the region.

Soleimani had traveled to Baghdad at the invitation of the Iraqi Prime Minister Adil Abdul-Mahdi, who had organized peace talks between Iran, Saudi Arabia and others in the region. Abdul-Mahdi revealed that Trump had personally thanked him for his efforts before using the opportunity to kill Soleimani, thwarting any chance at decreased tensions.

On the president’s actions, linguist and public intellectual Noam Chomsky claimed that the U.S. was a “rogue state” conducting “reckless international terrorism,” with Trump’s actions giving ISIS “another lease on life.” But former Trump advisor Sebastian Gorka “welcomed” the president’s actions and Iran’s retaliation, firing dozens of missiles at a U.S.-occupied military base in Iraq, as “now there can be no question that Iran is a threat to American national security.” 41 percent of Americans agree.

Recent polling from Reuters and Ipsos found that 39 percent of Americans “strongly disapprove” of the Trump administration’s overall handling of the Iran situation and last weekend saw anti-war protests in more than 70 locations across the United States. Nearly three-quarters of Americans believe the U.S. will attack Iran, if not imminently, within the next few years. If the anti-war movement wishes to stop another conflict, it had better get going.

Featured image: A young girl holds a poster displaying a portrait of Iranian Gen. Qassem Soleimani who was assassinated by the U.S. during a protest against the U.S. in Mumbai, India, Jan. 9, 2020. Rafiq Maqbool | AP