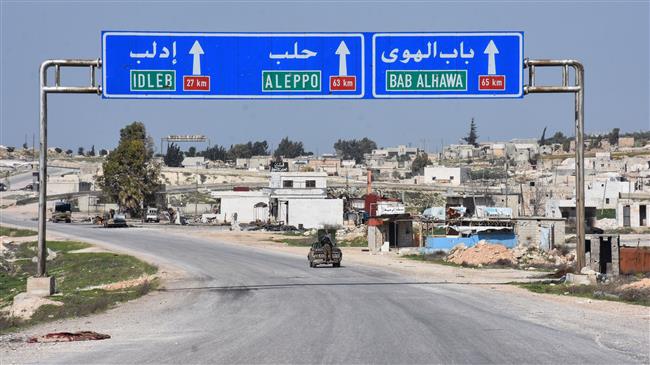 Syrian has reopened a strategic highway connecting the capital city of Damascus and the northern city of Aleppo after troops purged the area of Daesh and other foreign-backed militants.

Syria’s official news agency SANA said the M-5 highway that links Damascus to the second largest city Aleppo was reopened to the public after forces secured its surroundings from the danger of terrorists and rocket shells targeting civilians and travelers.

Dozens of buses arrived in Aleppo province from Damascus, Homs, Hama, Lattakia and Tartous governorates as a number of buses also left Aleppo through the western entrance of Aleppo, al-Nasr roundabout and the beginning of Aleppo-Damascus highway, according to SANA.

The Aleppo-Damascus international highway is considered an economic vital artery as it is a fast road for the flow of goods, transit trade and transporting passengers among big cities.

The development came as Turkish-backed terrorist groups on Saturday violated a newly-agreed ceasefire in the northwestern province of Idlib 19 times over a period of 24 hours and shelled the villages of Hazaren and Dar al-Kabira in Idlib’s southern countryside.

“Over the past day, 19 violations of the cessation of hostilities by illegal armed groups have been recorded,” SANA quoted head of the Russian defense ministry’s Coordination Center Rear Admiral Oleg Zhuravlev as saying.

On Thursday, Russia and Turkey came to an agreement on an imminent ceasefire regime in Idlib, where Turkish violations have brought about an unwarranted flare-up of violence.

According to the agreement, joint Russian-Turkish patrols will secure a six-kilometer-wide corridor along the M4 highway connecting the two government-held provinces of Latakia and Aleppo.

The ceasefire also consolidates Syrian control over the M5 highway.

The ceasefire came a few months after the Syrian army launched an anti-terror operation against foreign-sponsored militants in Idlib when they failed to honor an earlier de-escalation agreement brokered by Ankara and Moscow.