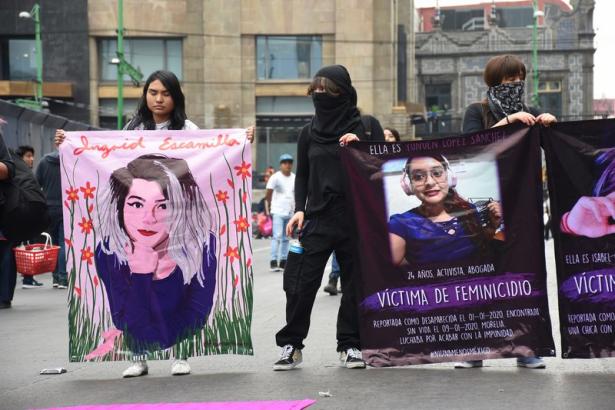 In Mexico, thousands are expected to march in celebration of International Women’s Day, March 8. One day later, millions of Mexicans will be called upon to support the country’s first all-women labor strike to demand an end to gender-based violence.

On 10 February, two Mexican newspapers published leaked photos of the mutilated body of Ingrid Escamilla, a 25-year-old woman who was murdered and skinned from head to toe by her boyfriend.

Five days later, on 15 February, the body of a seven-year-old girl named Fátima, who had been reported missing, was found in a plastic bag. She had been kidnapped, raped, tortured and had her organs removed.

In Mexico, where an average of ten women are murdered each day, many are growing restless – and angry at this level of violence. Tens of thousands are expected to take to the streets on Sunday 8 March, as part of protests happening around the world for International Women’s Day.

But recent news of gruesome femicides – murders with suspected or confirmed gender-related motives – and the government’s perceived indifference have driven women to also organize a nationwide strike the next day, 9 March, under the banner #UnDíaSinNosotras (#ADayWithoutUs).

This will be the first all-women labor strike in the country’s history, and its impact could be significant. There are about 22 million women in the workforce and, according to one estimate, if they all stop working for one day, the country could see economic losses of up to 26 billion pesos (£1 billion).

The strike, aimed at gender-based violence, also comes amidst movements to legalize abortion in all 32 states (currently it is only legal, up to twelve weeks of pregnancy, in two) – and campaigns to protect the rights of LGBTIQ individuals and end hate crimes and violence against trans people.

Femicides in Mexico “have always been bad but I see that it’s getting worse and I see how the government is not reacting and showing indifference,” says Jessica Castillo, a 37-year-old mother of two girls in the industrial town of Monterrey, arguably the most socially conservative city in Mexico.

Castillo, like thousands of other women in Monterrey, will be joining the women’s march in her city for the first time ever. For weeks, she has prepared for this with her friends, looking for purple t-shirts to wear and discussing whether to bring their youngest children – their daughters – to the protest.

As this will be their first time attending the annual protest, they don’t know what to expect and are concerned for their daughters’ safety. “Maybe previous attempts or smaller movements did not succeed [in ending femicides],” she added, “but now, women are going to stand firm and together say ‘no.’”

“That is the first step, to show this outrage, this indignation, this anger and that we are not willing to continue doing nothing.”

Broken promises
In late 2018, a new federal government took office led by Andrés Manuel López Obrador, who promised to tackle “the root causes” of violence and organized crime. But in the fifteen months of his administration so far, Mexico’s record on violence has instead reached an all-time high.

2019 became the year with the most murders in the past two decades. Numbers of femicides have also increased. According to Mexico’s Public Security Secretariat, 320 women were murdered this January, 73 of which were recorded as femicides (more than twice that recorded in January 2015).

In his daily press conferences, President López Obrador has been repeatedly questioned by journalists about what his government is doing to end this violence. Other estimates from Mexico’s national human rights commission suggest that 90% of registered femicides go unpunished, with no convictions.

“I don’t want the theme of this press conference to be femicides,” López Obrador said on 5 February, claiming that this has been used by his political opponents to “manipulate” and “distort” facts.

Days later, as his comments drew a fierce backlash, he accused feminists of being “covert conservatives” working to attack him politically. He argued that femicides are instead the result of previous “neoliberal” governments, and was condemned for dismissing concerns with vague plans for ‘moral regeneration’.

Feminists fight back
Shortly after seven-year-old Fátima’s death made national headlines, a group of about fifteen women in the coastal state of Veracruz called for a country-wide labor strike the day after the women’s march this Sunday.

The Veracruz group, called Brujas del Mar ( “Witches of the Sea”), is connected to a nationwide network of other feminist groups who supported their call to action that quickly went viral on social media. Women all over the country began announcing that they too would join the strike.

In a matter of days, private companies, universities and some local governments also came out in support of the women who chose to strike, saying they would face no retaliation if they didn’t show up for work. Among these are Bimbo, the largest bread maker in the world, Walmart and Google.

“We stand in solidarity and support women’s freedom of decision to participate in the national strike called for 9 March,” Google Mexico announced on social media. Meanwhile trade unions are so far not involved in the strike.

Schools, which are mostly staffed by women teachers, have scrambled to come up with plans to respond to expected absences in their classrooms. One teacher at a private school told openDemocracy that it will take attendance of male students as normal, and has asked fathers to come in and volunteer.

This weekend, women like Castillo in Monterrey, who has never joined a protest like the women’s march before, will be standing shoulder to shoulder with feminists who have been organizing for years – despite significant resistance from powerful conservative and religious groups.

In 2016, then President Enrique Peña Nieto sent Congress a package of reforms to recognize equal marriage and other LGBT rights at the federal level. This legislation would have forced Mexico’s states to comply with a previous Supreme Court ruling that said same-sex marriage is legal.

In response, various conservative groups got together under a coalition called the National Front for the Family (FNF) which campaigns and lobbies against same-sex marriage, women’s reproductive rights and “gender ideology”.

Peña Nieto’s proposals died in Congress and today same-sex marriage is legal in only 19 of 32 states, while FNF claims to have thousands of followers.

In the coastal state of Veracruz, where the call for the national strike began, Arussi Unda, a 32-year-old marketing professional and spokeswoman for the Brujas del Mar feminist group, told openDemocracy: “What we are seeing is the accumulation of stress, a stress that is not talked about”.

She explained: “When news of these very grisly femicides came out, we noticed an unusually high activity in our social media, we started getting messages from women asking for help, for emotional support.”

These stories are having a real impact on the psyche of Mexican women, says Unda, though not enough attention is being paid to these consequences.

“We were barely recovering from learning about the first of these two murders when we all learned about the second one, with only a few days in between them. Once we put this in the context that many of these cases happen everyday, that opened up the landscape of the true gravity of the issue”.

Unda continued: “The thought that there are many more cases like these is what’s driving us to join forces as women, with one goal, which is to demand safety, access to justice and the possibility to live our lives in freedom.”

[Isabella Cota is a journalist focused on finance and investigative reporting. Cota was a correspondent for Reuters and Bloomberg News in the United Kingdom, Costa Rica and in her native Mexico and has worked with Quinto Elemento Lab. Her work has been published in The Guardian, The Independent, Univision and BusinessWeek, among others.]

Featured image: Mexico City protest against gender-based violence against women after last month’s murder of Ingrid Escamilla. In Mexico an average of 10 women are murdered each day. , Eyepix/NurPhoto/PA Images