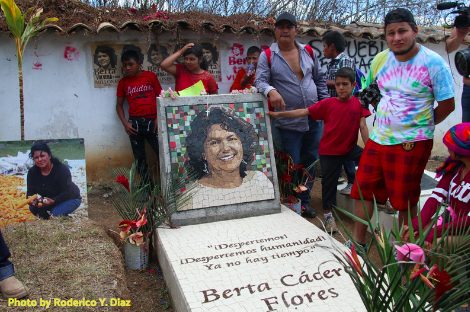 We need your help! On Thursday, March 29th the new version of The Berta Cáceres Human Rights in Honduras Act was re-introduced in the U.S. House of Representatives. The bill calls for the suspension of U.S. military and police aid to Honduras until human rights violations committed by Honduran security forces cease, and their perpetrators are brought to justice.

The bill states that “The Honduran police are widely established to be deeply corrupt and to commit human rights abuses, including torture, rape, illegal detention, and murder, with impunity” and that the military has committed violations of human rights.

Contact your Representative TODAY to ask them to co-sponsor the Berta Cáceres Human Rights in Honduras Act!!

RELATED CONTENT: “Death Sentence for Women”: Alabama Proposes Law to Make Abortion Punishable by up to 99 Years in Prison

Thank you for your advocacy in demanding justice for Berta and so many other Hondurans affected by U.S. police and military aid to Honduras.

Additional Context: March 2nd marked the three-year anniversary of the assassination of Berta Cáceres, the beloved Honduran Indigenous and environmental rights leader. We continue to demand justice for her brutal, politically-motivated murder. Although eight arrests have been made in the case, the investigation has been riddled with irregularities (including the theft of the case files) and evidence suggests that the intellectual authors remain at large. Moreover, Berta’s family and COPINH, the organization she co-founded, have been intentionally kept in the dark about the ongoing proceedings against her killers.

The bill features the following demands:

• All U.S. aid to Honduran security forces must cease, and the U.S. must vote no on all loans from multinational development banks to Honduras until the following conditions are met:

-Withdrawn the military from domestic policing, in accordance with the Honduran Constitution, and ensured that all domestic police functions are separated from the command and control of the Armed Forces of Honduras and are instead directly responsible to civilian authority;

-Established effective protections of the rights of trade unionists, journalists, human rights defenders, the Indigenous, the Afro-Indigenous, small-farmers, and LGBTI activists, critics of the government, and other civil society activists to operate without interference; and

-Taken effective steps to fully establish the rule of law and to guarantee a judicial system that is capable of investigating, prosecuting, and bringing to justice members of the police and military who have committed human rights abuses.