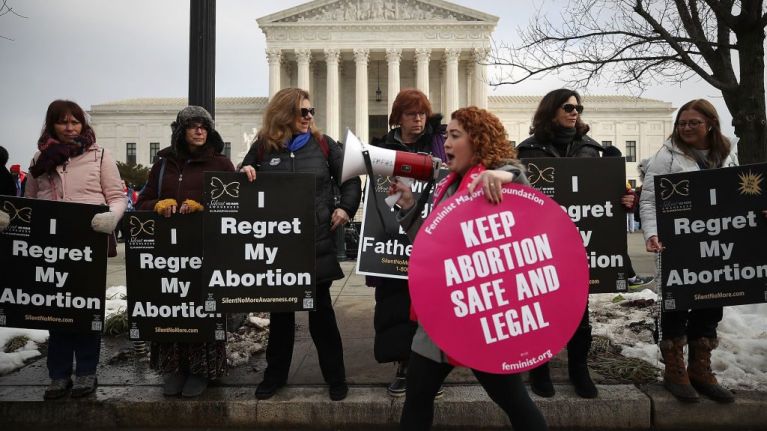 Bill would even criminalize performing abortions in cases of rape and incest.

Alabama is proposing a law that would make carrying out an abortion at any stage of the pregnancy punishable by 10 to 99 years in jail.

The strict abortion ban, which has been branded a “death sentence for women”, would even criminalize performing abortions in cases of rape and incest.

The legislation, which Alabama politicians introduced on Tuesday, would only allow abortions in instances where there is “a serious health risk to the unborn child’s mother”.

The bill also equates legalized abortion to some of history’s gravest atrocities – likening having your pregnancy terminated to the Nazi campaign of extermination that led to the mass murders of Jews and others during the Holocaust.

The legislation says: “More than 50 million babies have been aborted in the United States since the Roe decision in 1973, more than three times the number who were killed in German death camps, Chinese purges, Stalin’s gulags, Cambodian killing fields, and the Rwandan genocide combined.”

The bill, which has more than 60 co-sponsors in the 105-member Alabama house of representatives, means a doctor would be hit with a Class A felony if they were to perform an abortion. It would ban all abortions, even those using prescription drugs, as soon as a woman is “known to be pregnant”.

“It simply criminalizes abortion”, Terri Collins, a Republican representative who is the bill’s sponsor. “Hopefully, it takes it all the way to the Supreme Court to overturn Roe v Wade.”

Pressed about pushing a measure that obviously conflicts with Supreme Court decisions, Ms Collins said the “whole point is to get the courts to relook at this issue”.

She said: “I think people are seeing a possibility that the Supreme Court might have a more conservative-leaning balance”.

Alarm bells have been raised that Roe v Wade – the landmark Supreme Court decision that legalized abortion nationwide in 1973 – could be overturned or radically undermined with new conservative justices Neil Gorsuch and Brett Kavanaugh.

Staci Fox, president and CEO of Planned Parenthood Southeast, called it a “death sentence for women across this state”.

She said: “These bans are blatantly unconstitutional and lawmakers know it – they just don’t care. Alabamians are just pawns in this political game to challenge access to safe, legal abortion nationally.”

Alabama is the latest Republican-leaning state to try to pass a strict abortion ban as conservatives take aim at Roe v Wade. Abortion opponents in other states have been emboldened to attempt to provoke new legal battles that could spark Supreme Court justices to revisit the key case.

The Alabama bill comes after Kentucky and Mississippi approved bans on abortion once a fetal heartbeat is detected, which happens as soon as the sixth week of pregnancy. At six weeks, many women do not yet know they are pregnant.

Other states, including Georgia and South Carolina, could pass similar bans.

Georgia’s governor is contemplating whether to sign a law banning abortion once a fetal heartbeat is detected. More than 50 Hollywood actors, including Alyssa Milano, Alec Baldwin and Amy Schumer, sent a letter threatening to pull business out of Georgia, a focal point for TV and film production, if the ban is enacted.

Critics argue the Republicans are unnecessarily launching legal battles that will prove to be expensive and futile – with taxpayers potentially footing the bill.

Campaigners have also criticized the government for appointing anti-abortion rights activists to key posts in federal departments that handle women’s health, and striving to cut Title X funding to health providers that carry out abortions or make abortion referrals.