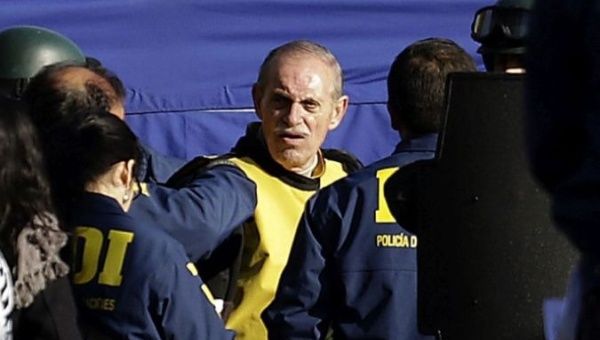 The Court of Appeals also ordered the Treasury to pay 50 million pesos to each of Miguel Enriquez’s two children.

The Court of Appeals of Santiago, in Chile, has tacked on a decade to currently imprisoned former Direccion de Inteligencia Nacional (DINA) agent Miguel Krassnoff for his involvement in the murder of Movimiento de Izquierda Revolucionaria (MIR) leader Miguel Enriquez.

“When Miguel Enriquez was in the house that was used as a safe house… DINA agents, without supporting justification, came to the place” and executed excessive and lethal force without affording occupants of the premises the option of due process, the court document detailed.

Krassnoff was unanimously sentenced to 10 years and one day in prison in the capacity as the architect of the crime, which was committed on October 5, 1974, in the municipality of San Miguel.

“Without exhorting them previously to surrender to be detained, they (DINA agents) started an armed offensive against the residents of the building… Enriquez was injured and [while attempting to tend to] his companion Carmen Castillo, who was pregnant and injured, is then surprised by the agents, who shot” and killed him in the courtyard of a neighboring building,” the document further stated.

Krassnoff and another agent Pedro Espinoza were also charged, late March, with the kidnapping and disappearance of three philosophy students in 1976.

According to the ruling, “around 1:00 pm, agents of the DINA… cordoned off and deployed a large contingent of said organization and Carabineros in the whole block…” at the address where Enriquez resided temporarily.

The Court of Appeals also ordered the Treasury to pay 50 million pesos to each of Miguel Enriquez’s two children.

Two other ex-DINA agents, Teresa Osorio and Rodolfo Concha, were each slapped with additional five-year-and-one-day sentences as Krassnoff’s accomplices in the murder of Enriquez.

DINA was a secret police force that was established, and carried out documented atrocities, during the dictatorship of former Chilean President Augusto Pinochet.