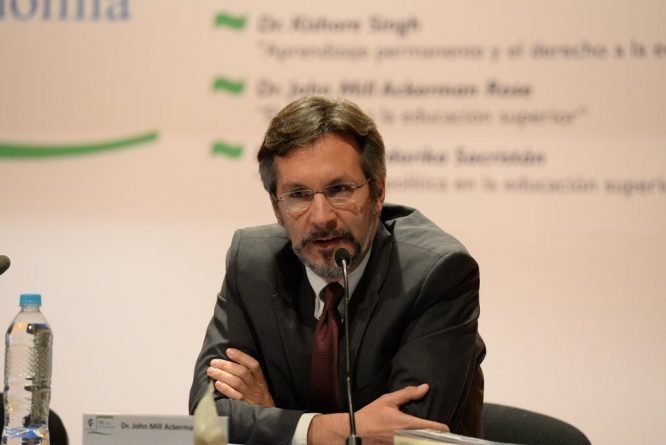 Only a totally disoriented person could believe the fancy tale that foreign intervention in Venezuela is to favor democracy or defend human rights. The imposition of Juan Guaidó by the United States as interim president responds exclusively to political and economic interests.

The kingdom of Saudi Arabia is a hereditary and confessional monarchy that constantly violates the human rights of women and journalists, but enjoys the unrestricted support of Washington and the European powers. The United States today is governed by a man who received 3 million fewer votes than his opponent in the elections of November 2016 and continuously violates the rights of migrants, but nobody advocates for non recognition of his government by the international community.

According to the United States Energy Information Administration, Venezuela has 302 billion barrels, the world’s largest proved oil reserve, more than Saudi Arabia, Russia or Iran (see). In an increasingly competitive and multilateral global context, Washington is desperate to regain control over its backyard that had been threatened with the arrival of progressive governments in that region.

In Brazil, Luis Ignacio Lula da Silva was imprisoned and the neofascist Jair Bolsonaro was imposed. In Ecuador, Lenin Moreno was co-opted to betray the legacy of Rafael Correa. In Argentina it was maneuvered to achieve the victory of ultraneoliberal Mauricio Macri. And in Venezuela today a soft coup is used to get Nicolás Maduro out.

Nicolás Maduro received 6 million votes, 67 percent of the vote, in the elections of May 20, 2018, crushing the second place, Henri Falcón, by almost 47 percentage points. Four candidates competed and 46 percent of the electoral roll participated. The election was organized by the National Electoral Council that applied the most advanced international standards in the matter. That was the second presidential election won by Maduro. In 2013 he also emerged victorious, with 7.5 million votes in a very competitive process against Henrique Capriles.

By proclaiming himself interim president, deputy Guaidó commits the crime of usurpation of functions. And when receiving a millionaire support from the United States government, supposedly for humanitarian programs, it would also incur the crime of treason. Washington also plans to give Guaidó control over the bank accounts of the state oil company CITGO to finance its coup.

It’s as if Bernie Sanders proclaimed himself president of the United States and received a multimillion dollar financing from China to buy weapons and loyalties. Or what if the government of Andrés Manuel López Obrador suddenly confiscated the assets of Banco Santander or the oil company Repsol and delivered them to Pablo Iglesias as support for his struggle for a true democracy in Spain?

Now, the ultimatum of the old colonial powers like England, Spain, France and Germany to be called soon to new elections in Venezuela has no logic within the presidential political systems that govern the Americas. In our continent, neither the Legislative Branch nor the opposition parties are entitled to unilaterally ignore the government in power or call early elections.

This type of action only makes sense within the parliamentary systems of Europe, where it is common to anticipate elections to get out of political crises. So by wanting to force Venezuela to assume the logic of a foreign political system, the intervention of Emmanuel Macron, Angela Merkel, Pedro Sanchez and Teresa May turns out to be just as aggressive and extralegal as Donald Trump’s.

In addition, Venezuela has already resorted systematically to the mechanism of early elections, by holding a National Constituent Assembly in 2017 and advancing the 2018 presidential elections as a result of the negotiations held with the opposition in the Dominican Republic.

The dignified position of the governments of Mexico and Uruguay implies a voice of sanity and legality in the current conjuncture. The Estrada Doctrine was developed precisely in order to defend the sovereignty of the peoples of the South against the imperialist attacks of the north, something more current and necessary today than ever.

If the Mexicans had not defeated the old authoritarian regime in the ballot box on July 1, 2018, the government would lead today the dictatorial intervention in Venezuela. The Fourth Transformation not only implies a breath of fresh air for Mexican democracy but also begins to bear fruit in favor of the freedom and independence of the peoples of the world.