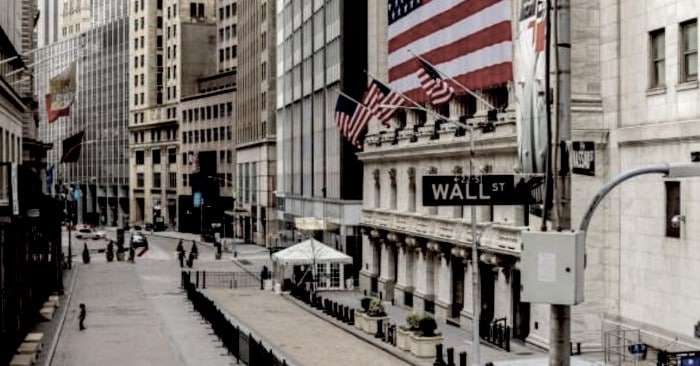 As this year’s economic crisis has developed, the U.S.-centered corporatocracy has desperately been trying to maintain the illusion of growth, or at the least the illusion that the current contraction is sure to end and things will return to normal. But as unemployment claims in the U.S. have continued to rise, and factors like the cold war with China have thrown the NATO countries into further economic chaos, it’s become clear that the stock market has been overly optimistic about a coming recovery. Market Watch wrote last month that “The rebound will be much more gradual than the V-shaped pattern investors are betting on.”

But true to the “it’s always worse than you think” pattern within the collapse of capitalism, this assessment in itself was overly optimistic. An economic recovery for the capitalist world isn’t going to be a gradual process from here on out, because far bigger economic shockwaves are just around the corner. Whatever semblances of revitalization the economy experiences in the coming months, they’ll be more than negated by the dollar crash of 2021.

Economist Stephen Roach said last week that evidence supports the formerly crazy idea that a dollar crash is coming, and that he sees this crash happening by the end of next year. To see the evidence, he said, you only need to look at the vast economic contractions that have occurred this year as at the very least 11% of the population has become unemployed. He pointed out that “The current account deficit in the United States, which is the broadest measure of our international imbalance with the rest of the world, suffered a record deterioration in the second quarter. The so-called net-national savings rate, which is the sum of savings of individuals, businesses and the government sector, also recorded a record decline in the second quarter going back into negative territory for the first time since the global financial crisis.”

It’s because of this internal weakening for U.S. imperialism that the rest of the world will soon decide to forsake Washington’s currency, and that a dollar crash will soon happen. If U.S. capitalism gets hollowed out enough, Washington’s perceived legitimacy as a reliable financial ally will be lost, resulting in a crash that will make the U.S. economy all the more weak. “Lacking in saving and wanting to grow, we run these current account deficits to borrow surplus saving, and that always pushes the currencies lower,” Roach said. “The dollar is not immune to that time honored adjustment.”

Part of the catalyst for this crash will be the fact that under the dysfunctional paradigm of neoliberalism, Covid-19 still isn’t on its way to winding down within the country. “As we head into flu season with the new infection rates moving back up again with mortality unacceptably high, the risk of an aftershock is not something you can dismiss,” Roach said. In accordance with the phenomenon he’s assessed of the U.S. sabotaging the stability of its own currency through neoliberal deterioration and isolationism, he also concluded that “America has abdicated its global leadership role.”

When the dollar crash comes, it will create a U.S. economic shrinkage similar to the one-third GDP decline that occurred in the second quarter of this year. Which will expose the profound market instability that was explained last month by the economist Yanis Varoufakis: “Capitalism is no longer what it used to be…What is fascinating at the moment is that you have the highest level of share prices and lowest level of dividends. Have you noticed that? So profitability is negative, profits are on the floor and share prices are on the ceiling…I don’t think that reducing taxes or announcing that you are going to an austerity mode is going to do anything to turn this liquidity bubble into an investment drive.”

RELATED CONTENT: How the Desire to Benefit From Empire Keeps the US Masses Tethered to Capitalist Reaction

With this further asset loss for the bourgeoisie will come more moves by the biggest corporations to consolidate capital. U.S. billionaires, who’ve collectively gained $845 billion during the pandemic so far, will gain hundreds of billions more while tens of millions more people slip into poverty. Hunger, which has tripled in the U.S. in the last year, will expand as inflation is exacerbated, and as the government compensates for a ballooning trade deficit by taxing beleaguered American consumers more. In this near future, one where the U.S. financial decoupling from China has greatly advanced, no powerful outside presence will be able to fund the saving deficit of a country that’s lost its exorbitant privilege.

With no magical solutions to turn to, and being unwilling to abandon neoliberalism, the capitalist ruling class will turn to austerity. Ever more social services will be stripped away, wages will further be lowered, and corporations like Amazon and eBay will profiteer from the desperate masses like they’ve been profiteering from Covid-19. The growing poverty and social dysfunction will make it even harder for the U.S. to reduce Covid-19 cases, further normalizing the virus as one of the mundane parts of contemporary American capitalism-like homelessness or hunger or lack of access to healthcare.

The foundations of our socioeconomic system will be in ruins, with everyone below the bourgeoisie or the labor aristocracy having to work for poverty wages, try to live off of welfare, or turn to crime. It will be a refutation of the American consumer lifestyle, one that exposes the unacknowledged reality about how wealth is created: consumption isn’t the cause of economic growth, it’s the result of growth. Without growth being present to sustain people’s former flow of spending money, the system will further devolve into price gouging, debt peonage, and dependence on labor that comes from slave-level wages.

It will be the third wave of depression that’s hit the country in the last thirteen years, a wave that even more thoroughly discredits capitalism in the minds of the masses. By studying revolutionary theory and organizing within the parties that can serve as the revolutionary vanguard, we’ll be able to build a proletarian movement in place of the neoliberal cultural hegemony that’s been shattered. In these final months before the dollar crash hits, stay focused on these activities. The chaos that you’ll experience amid the crisis is a symptom of the intensification of capitalist contradictions within the imperial core, and the move towards an outcome where proletarian revolution becomes mostly viewed as a practical necessity.