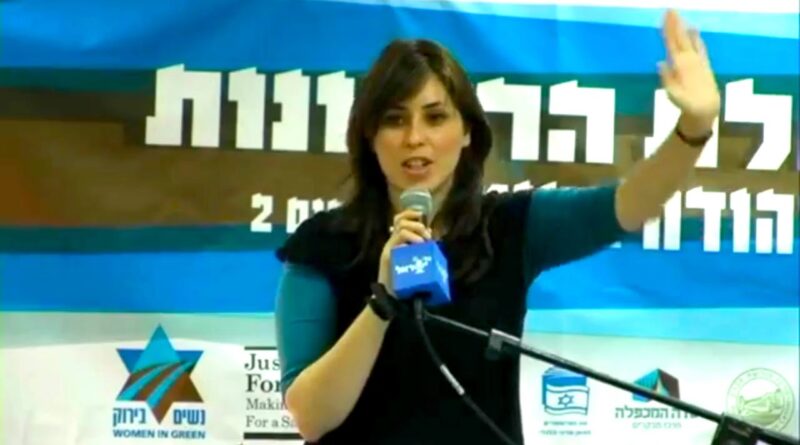 Israel’s incoming ambassador to the UK has called for “expanding” Israel into neighbouring Arab countries, a video of an old speech shows.

In it, Tzipi Hotovely expressed her preference for right-wing Zionist anthem “Two Banks to the Jordan,” a Hebrew song which in 1929 laid claim to the entirety of Palestine and what became the state of Jordan.

Having earlier in the speech criticized some Israeli politicians for the “mentality that doesn’t look 20 years ahead,” she articulated her vision for what she has called Greater Israel.

She explained in the speech: “We must not settle for preserving what exists. We must always look forward and ask ourselves: What do we want for the next generation? Do we want to see our enemies continuing the Islamic revolution on our eastern frontline? Or do we want to see the state of Israel expanding?”

The song’s chorus goes: “Two banks has the [River] Jordan / This is ours and that is as well” before continuing in a verse exclaiming: “Let my right hand whither / If I forget the East Bank of the Jordan.”

Hotovely went on in her speech to imply that the “expanding” of Israel should also include Syria: “if only those people in Syria had a little bit of the rights that Israeli Arabs have.”

You can watch her comments above, or see video of the full speech below.

As well as dismaying Syrians, the suggestion by Israel’s next UK ambassador that she would like to see Israel “expanding” on both sides of the River Jordan will also alarm Jordanians – at least half of whom are the descendants of Palestinian refugees expelled by Zionist forces in 1947 and since.

Israel already occupies a large tract of Syrian land – the Golan Heights, which it illegally annexed in 1980.

When Israel invaded in 1967, they drove out more than 95 percent of the population of the Golan – 130,000 Syrians – and systematically destroyed hundreds of villages and one city.

Since then, the refugees have been blocked by Israel from returning, while around 23,000 Israeli settlers now dominate the occupied territory.

Despite Hotovely’s claims, the remaining Syrians in the occupied Golan Heights today are still not treated with equality.

“Discriminatory Israeli policies continue to violate the basic human rights of Syrians who have become second-class citizens in the land of their birth,” the Syrian human rights group Al-Marsad says.

Hotovely gave her speech in 2012, addressing a radical group of West Bank settlers called the “Women in Green” at a conference at a settlement in Hebron.

“Jordan is a historic compromise”

One year later, as a junior minister, she told a Likud Party event that “the existence of [the state of] Jordan is a historic compromise” and that “whoever believes in the Greater Land of Israel has never been prepared to give parts of our homeland away for any purpose, not even for peace.”

A petition by British Jews launched in June calling for the UK to reject Hotovely as ambassador now has almost 1,900 signatures.

Although she was confirmed by the Israeli cabinet in August, current minister for settlements Hotovely is yet to arrive in the UK.

The last ambassador, Mark Regev, left the UK in June and the deputy ambassador has been serving as chargée d’affaires since. Regev returned to his position at the Israeli prime minister’s office in August.

Asked if she stood by the speech, Tzipi Hotovely and the Israeli embassy did not reply to requests for comment.

“Two Banks to the Jordan” was written by Vladamir “Zeev” Jabotinsky, the founder of right-wing Zionism and the ideological grandfather of the ruling Likud Party to which both Hotovely and Prime Minister Benjamin Netanyahu belong.

The logo of the Irgun militia founded by Jabotinsky includes a map of the entirety of Palestine and Jordan.

In her speech, Hotovely advocated for the right-wing Zionist anthem over another Hebrew song, “For All These Things,” by songwriter Naomi Shemer. The latter song’s most famous line urged: “Don’t uproot what’s been planted”.

The song became an anthem for settlers evicted from the illegal colony of Yamit when the Israeli occupation of Egypt’s Sinai ended in 1982.

But for Hotovely, it seems, refraining from “uprooting what’s planted” is not enough to satisfy her vision of an expanding Greater Israel.

Hebrew translations by David Sheen, with contributions from Dena Shunra.