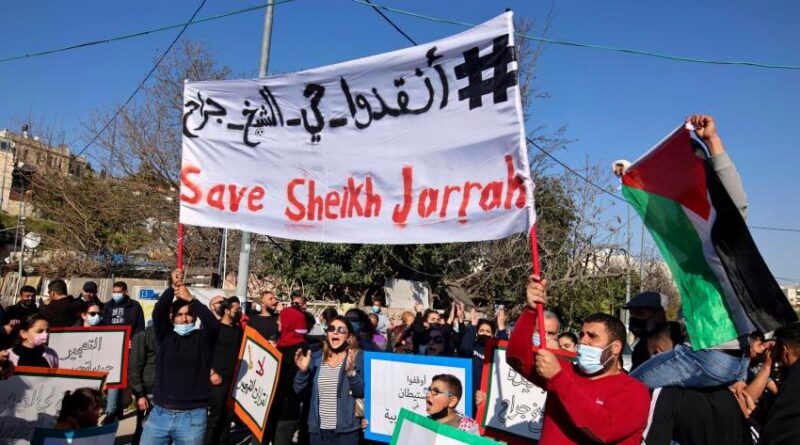 In 1983, Rafael Eitan, Chief of Staff of the Israeli Defense Forces (IDF), said, “When we have settled the land, all the Arabs will be able to do about it will be to scurry around like drugged cockroaches in a bottle.” Today, we are seeing such attempts of dehumanization in Sheikh Jarrah – an area of occupied and illegally annexed East Jerusalem.

Zionist Terrorism
Beginning from May 2, 2021, Israel has begun its attempts to forcibly evict 26 Palestinian families from their homes in Sheikh Jarrah. These families consist of refugees since the Nakba (the 1947-49 expulsion and forced exile of over two-thirds of the population by Zionist forces) and have been denied their United Nations (UN)-mandated right to return home. They were relocated in the neighborhood when it was under Jordanian control between 1948 and 1967.

Israeli propaganda attempts to present the idea that the homes being seized were once owned by Jews. This is a complete lie – the Jordanian authorities were the ones to finance the construction of the homes. Since the early 1970s, Palestinians in Sheikh Jarrah have been battling a series of Jewish settler organizations who filed lawsuits claiming the land belonged to them. Many Palestinians have been kicked out of the neighborhood and replaced by Israeli settlers. The current standoff and protests came about after an Israeli court ruled in favor of Nahalat Shimon International – an organization based in the US – and Ateret Cohanim, another settlement group that seeks to take over the properties.

In its bloody quest to eliminate Palestinians from Sheikh Jarrah, the settler state has left no stone unturned. Combat-clad murderers have been sent in to terrorize Palestinian sit-ins with skunk water, tear gas, rubber-coated bullets and shock grenades. Protesters have been physically assaulted, kneeled on, choked, and shot at with live rounds. On May 7, 2021, the Israeli police forcedits way into the neighborhood as Palestinians and solidarity activists gathered to break their Ramadan fasting in solidarity with 40 Palestinians, including 10 children.

As Palestinians gathered to demonstrate against the forceful eviction of dozens of residents, Jewish settlers, including Itamar Ben-Gvir, a lawmaker and a follower of Meir Kahane – the founder of the violent Jewish Defense League who advocated the mass ethnic cleansing of Palestinians – arrived at the scene. Ben-Gvir set up a provisional office across the street from the Iftar meal as other settlers, who have chanted racist slogans, such as “Death to Arabs” and called for all Palestinians to be thrown out from the neighborhood, pepper-sprayed at the Iftar table.

On the same day, a video surfaced on social media which showed Ben-Gvir, along with Jerusalem Deputy Mayor Arieh King, disparagingly yelling at a Palestinian who was apparently wounded by Israeli police, yet returned to protest against the evictions of Palestinian families. Ben-Gvir is heard shouting, “Abu Hummus, how is your ass?” “The bullet is still there, that’s why he is limping,” deputy mayor King, is also seen explaining to Ben-Gvir. Then, King himself joins the shouting. “Did they take the bullet out of your ass? Did they take it out already? It is a pity it did not go in here,” he continues, referring to the bullet while pointing to his head. It is not surprising that King used this sadistic rhetoric. He is the director of a right-wing settler organization named Israel Land Fund (ILF) which constantly targets the Sheikh Jarrah neighborhood. In 2017, King told an Israeli newspaper that up to 500 Israeli families would move into Sheikh Jarrah within the next decade. The precise method of doing this has been made clear now, namely Zionist terrorism.

Illegal
The colonialist attempts to evict Palestinians from Sheikh Jarrah are patently illegal. The Palestinians consider East Jerusalem to be their capital (as does most of the planet). Israel captured East Jerusalem during the Six Day War in 1967. In the immediate aftermath of the war, it passed the Municipalities Ordinance (Amendment No. 6) Law, which authorized the extension of Israeli law and administration to East Jerusalem and empowered the Interior Ministry to unilaterally enlarge the municipal boundaries of East Jerusalem.

In 1980, Israel illegally annexed East Jerusalem as part of the Basic Law of Jerusalem, which declared that “Jerusalem, complete and united is the capital of Israel.” To cement the annexation, the Israeli government approved the Master Plan 2000, a massive scheme to rearrange the boundaries of the city in such a way that it would ensure permanent demographic majority for Israeli Jews at the expense of the city’s native inhabitants. In other words, the Master Plan was a blueprint for a state-sponsored ethnic cleansing campaign, which saw the destruction of thousands of Palestinian homes and the subsequent eviction of numerous families.

In response to the 1967 act, the United Nations Security Council (UNSC) adopted Resolution 252, which affirmed that “acquisition of territory by military conquest is inadmissible.” The resolution also stated: “all legislative and administrative measures and actions taken by Israel, including expropriation of land and properties thereon, which tend to change the legal status of Jerusalem are invalid and cannot change that status.” This view has been reiterated with regard to the ethnic cleansing of Sheikh Jarrah.

“We call on Israel to immediately call off all forced evictions,” UN rights office spokesman Rupert Colville told reporters in Geneva on May 7, 2021. He emphasized that East Jerusalem “remains part of the occupied Palestinian territory, in which international humanitarian law applies” and that Israel is not authorized to “impose its own set of laws in occupied territory, including East Jerusalem.” “The occupying power…cannot confiscate private property in occupied territory.”

Under international law, he said, it is illegal to transfer civilian populations into occupied territory and this “may amount to war crimes.” Colville urged the Israeli regime to depart from behavior that further contributes to “a coercive environment or leads to a risk of forcible transfer.” “We further call on Israel to respect freedom of expression on assembly, including with those who are protesting against the evictions, and to exercise maximum restraint in the use of force.”

Erasure
Palestinian activist Tamer Maqalda has recorded the footage of the exchange between Mona al-Kurd – a resident of Sheikh Jarrah – and an Israeli man named Jacob, whom al-Kurd knows because his family has already stolen half of her home. “Jacob, you know that this is not your house,” al-Kurd tells the man in her backyard, who replies: “What’s the problem? Why are you yelling at me?” “I didn’t do this,” the man insists. “It’s easy to yell at me, but I didn’t do this.” Al-Kurd then pleads, “You are stealing my house!” Jacob replies: “And if I don’t steal it, someone else is going to steal it.” Al-Kurd then protests that “no one is allowed to steal it.”

Jacob’s matter-of-fact attitude toward the seizure of Palestinian homes reflects the structurally engrained colonial consciousness cultivated by the Zionist state among its populace. It is a measure of the degree to which Palestinian existence has been rendered trivial and disposable by Israel. This erasure has in turn facilitated the territorial enclosure of Palestinians.

In today’s world, the settler colonial logic of ideological obliteration has been aided by social media giants. These platforms have again displayed their cozy relations with Israeli colonialism by censoring, limiting, or shutting down the accounts of those users who have uploaded and shared video content and images about the Zionist attacks in Sheikh Jarrah. This wide-ranging campaign of erasure will come to an end only if the world univocally opposes the annihilationist and annexationist agenda of Israel.