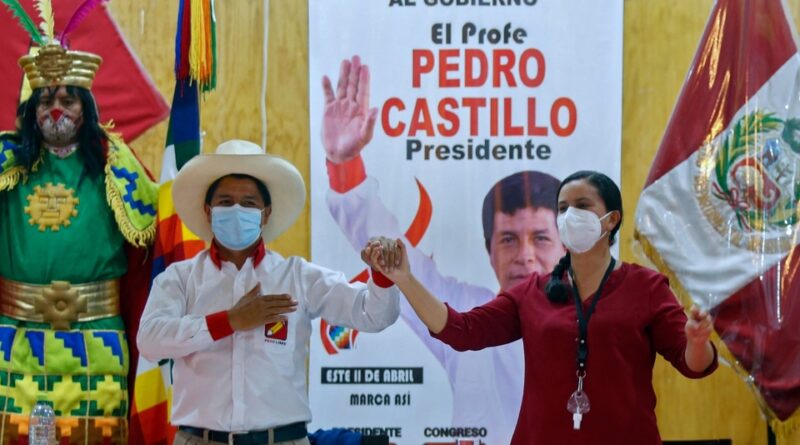 Four weeks before the June 6 run-off election, the Peruvian left have united and close to an agreement to promote a “government of change” headed by the professor and trade unionist Pedro Castillo, who is facing the right-wing Keiko Fujimori, daughter and political heir of the imprisoned ex-dictator Alberto Fujimori.The Peru Libre party, which defines itself as Marxist-Leninist and is running Castillo’s candidacy, and the progressive coalition Together for Peru, which in the first round had Verónika Mendoza as its candidate, have signed a political pact to support Castillo’s candidacy, which is also the basis for a government alliance if the leftist candidate wins the elections. Castillo and Mendoza have defined this agreement as an alliance “for the re-foundation of the country”.

The central points of this agreement are to face the serious health crisis caused by the pandemic by ensuring universal and free vaccination and improving the precarious health services; to reactivate the economy by changing the neoliberal model imposed three decades ago by Fujimori’s dictatorship; to prioritize the fight against corruption, widespread among the political class; and to refound the State to guarantee rights and equality for all. They also propose to change the Constitution inherited from the Fujimori regime, which reduces the State to a subsidiary role of private activity.

Castillo has said that this agreement is “a commitment to the neediest families”. “We are on the other side of those who defend pseudo-democracy, a Constitution to the size and weight of the great oligarchy, of those who always managed the State. This is the moment to embrace this cause to re-found the homeland”, said the leftist candidate, speaking next to Veronika Mendoza, whom he thanked for her support.

Mendoza, who in the first round obtained 7.8 percent, pointed out that the commitment assumed was “to work together and achieve a government of change led by Professor Pedro Castillo.” “It is not only the victory of Professor Castillo that is at stake, but we have the historical responsibility of putting a stop to authoritarianism, the mafia and the past”, said the former presidential candidate, in reference to a possible restoration of the Fujimori regime of the 1990s, characterized by authoritarianism, human rights violations and corruption.

In this way, the left is joining forces to defeat the extreme right candidate, who has the support of various conservative groups that participated in the first round, of the business community and of the big media, which have launched an aggressive and massive campaign of fear and demolition against Castillo’s candidacy. They intend to scare with the ghosts of communism, chavism and terrorism. In an old practice used by Fujimorism against its rivals, Castillo is being accused of being a terrorist, allegedly linked to the political remnants of the defeated Maoist armed group Sendero Luminoso, which carried out an internal war in the 80’s and 90’s, which the candidate has repeatedly denied. A millionaire campaign calls to “vote against communism”. This campaign against the candidacy of the left, disguised as a defense of democracy, hides the authoritarian and corrupt past and present of Fujimorism in order to portray its candidate as a “defender of democracy”. A campaign that defies memory.

After signing the pact with Veronika Mendoza, Professor Castillo made public a ten-point statement in which he commits himself to respect democracy and freedom of the press. This is a response to the massive campaign that accuses him of having authoritarian intentions. In this statement he also commits himself not to renounce to his proposals for change and specifies that he will implement them within the democratic institutionality and “respecting property”.

Human rights organizations and relatives of the victims of the internal war – the victims are estimated at around 70 thousand – have demanded from both candidates a commitment to human rights, trials of the repressors, reparations to the victims and compliance with the decisions of international organizations on this issue. In his public pronouncement, Castillo commits himself to the defense of human rights and the respect for international treaties on this matter signed by the country. Keiko has said that there was no internal war, but only terrorism. While in government, Fujimorism had a practice of human rights violations and has a long history of denying those violations and protecting repressors. Keiko has announced that she will pardon her father, sentenced to 25 years for crimes against humanity, which goes against international treaties signed by the country that prohibit pardons for those convicted of crimes against humanity.

Attacked by the establishment, this agreement with Juntos por el Perú and his public commitment to respect democratic institutionality, allows Castillo to counteract an image of certain loneliness, open his candidacy to other sectors and reduce the fears of voters who see him as an authoritarian risk, fears fed by a millionaire campaign and also by some statements of members of his party. Castillo is questioned about the lack of a technical team, a weak flank of his candidacy, and this agreement with Juntos por el Perú could provide him with those cadres he is lacking.

According to a poll published on Friday, Castillo is still ahead, but the distance with his rival has been reduced in one week from ten to five points. Datum pollster Datum gives Castillo 41 percent and Keiko 36 percent. The leftist candidate is down three points and the Fujimorista is up two points, in relation to a poll by the same pollster a week ago. This result has excited the right wing. However, this last poll does not measure the impact of Castillo’s recent agreement with Juntos por el Perú, which unifies the left and may have a broader effect than the sum of the percentages of both in the first round, nor that of the pronouncement of the candidate of Perú Libre in defense of democracy.

After the debate in a square in the Andean province of Chota, the candidates could meet again in a prison. Castillo challenged Keiko to debate in a women’s prison in Lima. Sarcastic, he said that as he had been local in Chota, where he was born and lives, now it was Keiko’s turn to be local and proposed the San Monica prison, where the Fujimorista, prosecuted for money laundering, criminal organization and obstruction of justice, was imprisoned for several months. Keiko, eager to debate in order to reverse her disadvantage, agreed to do so at the door of the prison.