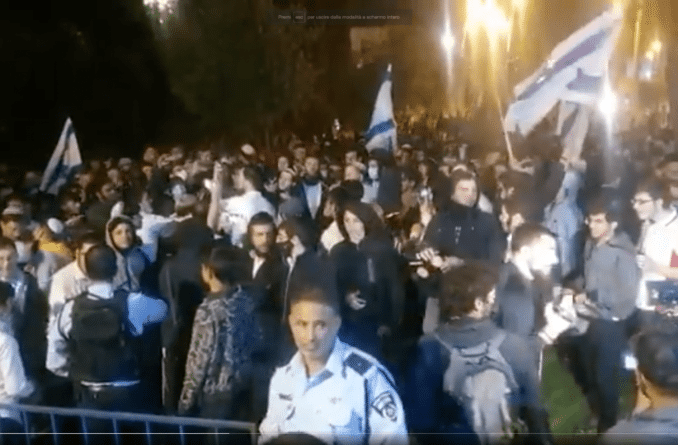 On May 10 this year the state of Israel … but wait a moment … before we go any further … in talking about this state, its ‘independence’ was announced in 1948 by a colonial settler minority, putting it in exactly the same category as the ‘unilateral declaration of independence’ made in 1965 by Ian Smith, representing the colonial settler minority of Rhodesia (now Zimbabwe).

So this is the first issue hanging over the state of Israel to this day. In any case, to continue, on May 10 the colonial-settler state of Israel will “celebrate” Jerusalem Day, marking the anniversary of the capture in 1967 of the “Temple Mount” and the “eastern parts of the city,” as the Times of Israel puts it (the Hebrew calendar is lunar, so the date, 28th Iyar, shifts year by year).

And here we have to stop again because what was captured in 1967, first, was not the ‘Temple Mount’ but the Haram al-Sharif, a Muslim compound containing two of the holiest sites outside Mecca, Al Aqsa (the farthest) mosque and the Qubbat al Sakhra (dome of the rock) sanctuary. There is a mount but there is no temple and strive as they might, as they have done ever since 1967, archaeologists have never found the evidence that one was ever there. This is not to say there was not but for no ruins to remain after a comparatively short time in history, it cannot have been anything like the gigantic structure described in the Bible.

Next are the “eastern parts” of the city but let’s not forget the western parts. In 1948 Palestinian Muslims and Christians still owned 70 percent of land and property in West Jerusalem and almost all of it in the east, where by 1948 the Jewish community consisted of about 2000 people: most of what is known today as the ‘Jewish quarter’ is property stolen from the Palestinians.

In the partition plan of 1947 Jerusalem was to serve as a corpus separatum between the Palestinian and Jewish states. In 1948 zionist militias occupied as much of the city as they could before the diplomats intervened. With more time, they would have taken all of it, but the point here is that in 1948, just like 1967, the zionists had no legal claim to west Jerusalem. The ethnic cleansing of Palestinians included about 70,000 driven out of west Jerusalem and its immediate environs.

In any case, what happened on the ground in 1967 when the zionists seized the eastern part of the city? What will they actually be “celebrating?” on May 10? A short list begins with the destruction of the 135 buildings in the 40 dunums (2.5 acres) of the Harat al Magharibah (the Maghrebi or more commonly the ‘Moroccan’ quarter’), bordering the western wall of the Haram al-Sharif, and built in the late 12th century by Malik al Afdal, son of Salah al-Din al Ayyubi (Saladin) as a waqf (inalienable Islamic endowment) to accommodate travelers and scholars arriving from North Africa.

On the evening of June 10, five days after Israel attacked Egypt and Syria, about 650 residents of the Magharibah quarter were turned out into the streets at short notice, taking with them only whatever they could carry of their personal possession. The entire quarter, including the contents of all the homes, was then dynamited and bulldozed to make way for a ‘plaza’ for Jews.

Those who refused to leave were forced out: the body of a woman who had not left was later found buried in the rubble. Several other bodies were also reportedly found.  Some of the families driven into the street were taken in by relatives but most ended up in the Shu’fat and Qalandiyya refugee camps. Within two days, nothing was left of the Magharibah quarter.

Apart from the homes, the destruction included two mosques, a Sufi lodge, the Afdaliyya madrasa (school), built for jurists of the Maliki school of Islamic law and the Hakurat al Khatuniyya (the garden of the noblewoman), a site containing Roman and Byzantine ruins and the foundations of an Umayyad palace.

Two years later the occupiers destroyed the nearby Fakhriyya madrasa and residence of the mufti of the Shafi’i school of law along with a house near the Haram that had been lived in by generations of the same family since the 16th century. The building itself was regarded as an outstanding example of Mamluq architecture.

During the conquest of the West Bank, some 300,000 Palestinians were driven out/fled across the Allenby Bridge into Jordan. The 5000 Palestinians turned out of Jerusalem and then the West Bank (on the all-purpose grounds of ‘security’) included the former mayor of East Jerusalem, Rouhi al-Khatib. Several villages and hundreds of buildings elsewhere were completely destroyed in the name of ‘security.’

The occupation of the Syrian Golan Heights was followed by the displacement of a further 120,000 people, Syrian nationals as well as about 17,000 Palestinian refugees from 1948. In June 1974 Israel withdrew from some of the Golan Heights but not before deliberately dynamiting most of the city of Quneitra. These are some of the realities being celebrated on May 10.

But let’s return to the Times of Israel’s account of the fun times to be had in Jerusalem on May 10. The activities include visits to the Tower of David Museum and the City of David, and again, we have to stop right here. This citadel site near the Jaffa Gate has been dated back to King Herod’s time (although, as a vantage point in the city, it would have been a natural defensive position for anyone occupying Jerusalem long before the Hebrews arrived in Palestine.

In turn, Salah al-Din al Ayyubi, the Mamluqs and the Ottomans all rebuilt the site: what the tourist guides call the ‘tower of David’ is actually the minaret of a Mamluk mosque, As for the ‘city of David,’ despite endless digging under and around the Haram, outside the scriptural accounts, it is still questionable whether a king called David ever ruled Jerusalem or that he even existed.

But let’s move on to where to stay while joining the celebrations in Jerusalem. The options given by the Times of Israel include the Mamilla Hotel.   Jerusalem has many hotels and private houses that are stolen Palestinian property but the Mamilla is an interesting example because of what else it signifies. Occupied west Jerusalem in 1948 included the Mamilla cemetery.

As a burial site, Mamilla dates back to Byzantine times, as a Muslim cemetery back to the 7th century. The graves and tombs include, reputedly, companions of the Prophet (sahaba) religious scholars, sufi sheikhs, judges, the descendants of some of the city’s oldest families as well as the thousands of soldiers, Christian and Muslim, who fought and died for the city during the Crusades.

After seizing west Jerusalem in 1948 the Israeli administration pledged to respect the Mamilla cemetery. “Israel will always know to protect and respect this site,” in the words of the Ministry of Religious Affairs. In practice, while promising to safeguard Muslim religious sites, the state oversaw their destruction. Village cemeteries were ploughed over or left to fall into disrepair from calculated neglect and mosques were turned into chic art galleries, museums and cafes. None of this was accidental or collateral damage or the unforeseen consequences of war. It was all deliberate because if Israel was to exist, Palestine had to be destroyed.

As a symbol of Palestinian Jerusalem alongside the Haram al-Sharif the Mamilla cemetery was a prime target for ‘redevelopment.’ Far from protecting the site, the government soon authorized its piecemeal destruction, once it was taken over by the Custodian of Absentee Property. Over the decades the cemetery was cut up for access roads, a car park, a school and playing field, a lavatory block, a park (‘Independence Park’) and cafe, a hotel and a government building, as well as being dug up around the graves for the laying of electricity cables.

Of the thousands of headstones on the site in 1948, only a few were still standing in 1967 and only an estimated five percent are left now. Only about eight percent is left of the original 134.5 dunums (33 acres) of the cemetery. The original Mamilla water pool/cistern is empty, with vandalism adding to the picture of deliberate neglect by the municipality.

The current threat to what is left of the cemetery is the construction of a ‘Centre for Human Dignity – Museum of Tolerance.’ This grotesque tying together of dignity, tolerance, and desecration was the initiative of the Simon Wiesenthal Centre in the US. The ground was broken in 2004 and digging began in 2005. In the following years, headstones were bulldozed, hundreds of graves were opened and the bones of the dead removed. The museum will take up 10 percent of what is left of the cemetery and given plans approved to build a hotel and hundreds of homes on the site, it is safe to predict that in time nothing will be left.

Conquest, destruction, dispossession and desecration are the realities behind what will be celebrated in the streets of Jerusalem on May 10. The occasion will be a standing invitation for the thugs who have been running wild in the streets of Sheikh Jarrah to inflict more pain on the Palestinians. “Death to the Arabs” they cry, as they have cried over the years, in Jerusalem and across Palestine. These are the “extremists,” Lehava (Prevention of Assimilation in the Homeland, aimed not just at Palestinians but all Christians) and Otzma Yehudit (Jewish Strength), both of them, in their ideology and street brutality, the heirs of Rabbi Meir Kahane and his Kach (Thus) Party.

But they are only slightly more extreme, slightly more open in their genocidal intentions than the extremists inside the government and Knesset and the extremists waiting for their turn to take power. They are not an aberration but the inevitable product of a racist ideology and the state on which it has been built. Israel is on a destructive path, destructive of the world around it, destructive of itself, but can still celebrate what has brought it to this point.