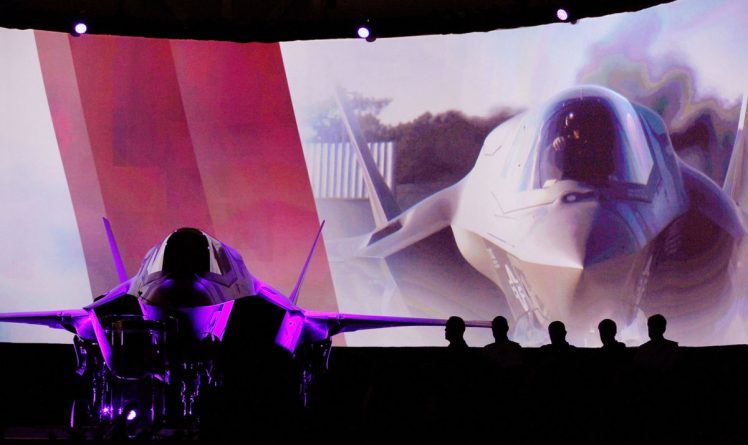 U.S. taxpayers are no strangers to getting saddled with monstrously expensive weapons programs at the expense of basic needs like food, shelter and education. The Pentagon paid $44 billion for 21 very fragile B-2 stealth bombers, few of which still fly in combat roles. The F-22 fighter, coming in at more than $350 million per plane, was built to combat Cold War adversaries who ceased to exist six years before the first jet rolled off the production line. The sticker price for Ronald Reagan’s harebrained “Star Wars” missile defense program stands at around $60 billion.

Alas, there always seems to be more room at the Pentagon trough. Enter the F-35 Lightning II fighter aircraft.

“Japan Air Self Defense Force Stands Up First F-35A Lightning II Fighter Squadron,” announced the April 1 headline in The Diplomat, a publication focusing on Asia-Pacific news. “Stands up” is military speak for weapons or personnel that are ready to fight. “This is a major milestone for the F-35 enterprise, as it marks the first F-35 IOC for an Indo-Pacific region customer,” said F-35 program executive director Vice Admiral Matt Winter, who went on to praise the “global nature of this program.”

And then this happened, as explained by NPR 10 days after Japan’s first squadron of F-35A fighters was approved for active service: “Japan’s military has confirmed that one of its F-35A jet fighters has crashed in the Pacific Ocean during a training exercise.” As of this printing, the pilot remains missing

So it continues to go for the preposterously expensive F-35 fighter program. It began with such promise, too, as far as airborne weapons of mass destruction go. First conceived by Lockheed Martin in 1997 and built in collaboration with Northrop Grumman and BAE Systems, the F-35 first took wing in 2006. The all-purpose fighter was intended to stand as the replacement for the A-10 Warthog, F-15E Eagle, the F-16 Falcon, the AV-8B Harrier and the F/A-18 Hornet.

“The F-35 wouldn’t just be shared across the branches of the U.S. military,” wrote Popular Mechanics in July. “It was to be shared around the world. A coalition of ‘partner nations’ would not only fly and produce the aircraft but support it worldwide.” Allied nations – excuse me, customers – lined up to be a part of the bold new future represented by Lockheed Martin’s newest and stealthiest brainchild.

It did not take long for a series of fantastically pricey problems to pile up. The production plan had the planes being built before all the highly technical, often brand-new systems had been tested. When these began failing, fixing them in aircraft that had already come off the production line rapidly turned the program into a financial sinkhole.

The eight million lines of code that make up the software controlling vital elements like the aft tails, electronic warfare systems and flight control were bursting with bugs and subject to malicious hacks. The helmets were too big. The ejection seats didn’t work. The four-piece wings met with assembly difficulties and the supporting bulkheads suffered from structural fatigue. The plane itself was 2,000 pounds too heavy.

Perhaps most significantly, the F-35 was deadly — and not just for the so-called “enemy.” According to the Pentagon’s lead weapons tester in 2016, the F-35 suffered from a litany of software and structural issues that “may cause death, severe injury, or severe occupational illness,” among other problems. All in all, the tester found more than 90 different ways the aircraft would be unable to complete its missions.

Ours is a society that condones and even celebrates organized, profitable, global murder.

The F-35 program has been so messy, in fact, that the entire F-35B line of fighters came within an eyelash of being canceled in 2011. That fate was unfortunately avoided, but the completion date for the project has been pushed back multiple times, and the planes are not expected to be fully and safely operational until at least 2021. Japan just found this out the very hard way.

How much is this flying calamity costing us, the taxpayers? The numbers are a bit fuzzy because there have been so many overruns, false starts, failures and faulty estimates. The baseline cost stands at $35,000 per operational hour. The first two F-35As to come off the production line cost more than $200 million to build, but according to Forbes, that cost is expected to drop next year. Maybe. Unless something else goes wrong. Which will probably happen. Or has already happened. Again.

Final estimated price tag, which is almost certainly too low: $1.5 trillion. If they canceled the entire F-35 program today, we’d still be paying out the contracts for years. All the other countries (customers!) that jumped on the F-35 bandwagon — Germany and France took a wise pass — are also on the hook for huge sums of money because of this still-dysfunctional thing, thanks to the aforementioned “global nature of this program.”

Until we find a better way, we will continue to spiral ever downward to dissolution.

I could regale you, dear reader, with a litany of things that $1.5 trillion would better serve – actual and affordable health care, children’s reading programs, fighting hunger, combating poverty, providing homeless assistance, enhancing elder services, properly funding green energy research, job training, pollution cleanup, storm and flood preparation, along with vital infrastructure necessities like roads, schools, hospitals and high-speed rail, to name but a scant few. Instead, that money goes to the shabby manufacture of dysfunctional war machines that may never work, right alongside all the ones that work too well.

The truly galling part, however, is this: $1.5 trillion is only a drop in the bucket of what we have squandered over the years funding the wholesale slaughter of our fellow human beings.

Every bomb dropped, every missile launched, every bullet fired, every rifle snapped to order arms, every uniform donned and then stained with blood, every body bag filled and every faraway city reduced to rubble is money in the bank for a small cadre of well-connected profiteers you will never meet. This is the United States, after all, where our business is business. War is the most profitable business of all, and we have more “customers” than we know what to do with thanks to all the weapons we’ve sold to former “customers,” lather-rinse-repeat.

The tragedy of the F-35 isn’t merely the cost, however, not by a very long chalk. The tragedy is the ongoing militarized mindset that makes debacles like the F-35 not just possible, but inevitable and ongoing despite all the glaring cash-starved problems slowly but visibly rotting the nation from the inside out.

The F-35 is not just a bad plane that costs too much. It is a symptom of the mindset that is eating this country, and the world, alive. “Misplaced priorities” is a kind euphemism. Ours is a society that condones and even celebrates organized, profitable, global murder. The money we’ve shoveled into this bottomless hole is nothing more than a tangible symbol of all the opportunities we have wasted, a visible price tag for the missed chances of a damaged existence.

“We flatter ourselves that Trump is an aberration. He isn’t,” writes Matt Taibbi about yet another symptom of this society’s debased militaristic priorities, the Iraq War. “He’s a depraved, cowardly, above-the-law bully, just like the country we’ve allowed ourselves to become in the last fifteen years.”

Call it 15 years, call it 50, call it 243. It’s all math leading to the same conclusion in the end. Until we find a better way, until we break the military mindset across our collective knee, we will continue to spiral ever downward to dissolution, just like the Japanese F-35 that was devoured by the sea.

William Rivers Pitt is a senior editor and lead columnist at Truthout. He is also a New York Times and internationally bestselling author of three books: War on Iraq: What Team Bush Doesn’t Want You to Know, The Greatest Sedition Is Silence and House of Ill Repute: Reflections on War, Lies, and America’s Ravaged Reputation. His fourth book, The Mass Destruction of Iraq: Why It Is Happening, and Who Is Responsible, co-written with Dahr Jamail, is available now on Amazon. He lives and works in New Hampshire.