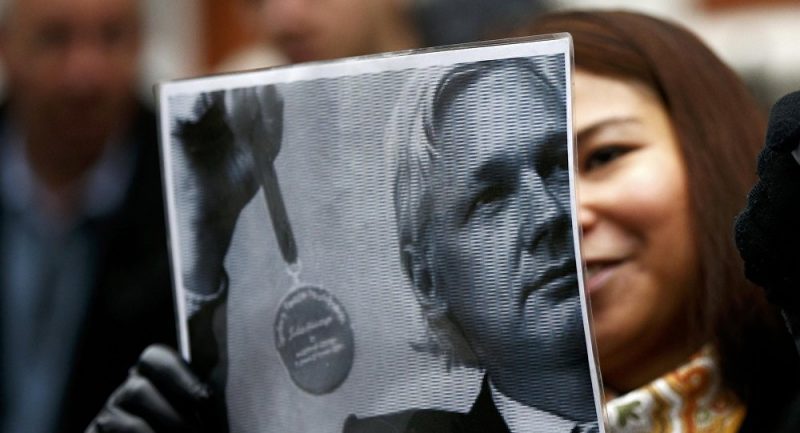 Metropolitan police arrested Assange inside the Ecuadorian Embassy in London Thursday, where he had been residing since 2012 under political asylum fearing extradition over the now dropped charges in Sweden and WikiLeaks’ revelations in the US. A US host and human rights activists have given their take on Assange’s arrest and its implications.

Alfred de Zayas, an American lawyer, writer, historian, expert in the field of human rights and international law, as well as a former UN official, has portrayed Assange’s arrest as “a juridical aberration and a grave violation of the refugee convention”.

He stressed in written commentary to Sputnik that the high commissioner for human rights should make a statement denouncing Ecuador’s actions and demanding comprehensive protection of Assange’’s rights under the Geneva Convention.

‘Moreno’s Washington’s Stooge’
Commenting on the development, Don Debar, host of the US syndicated daily radio newscast CPR News, stressed that “the arrest of Julian Assange will, in the long term, do more to expose the real nature of the so-called democratic West than 100 document dumps could ever do”.

He dwelled on the “non-existent press freedom in the US and Europe”, which the detention virtually exposed, arguing that should one come up with materials “exposing criminal activity by the powerful, the publisher but not the exposed powerful criminal will face prosecution”.

He further addressed the “farcical” idea of unbiased prosecution:

“The idea of an independent judiciary is farcical — the on-again/off-again nature of the charges in the Swedish courts, as well as the Torqmada-esq secret proceedings in the US which are certainly driving them, show that prosecutions can target and be controlled across borders to exact political vengeance”, the journalist noted, adding that elections in the West are also a farce, “and the US meddles in these in the same way Kasparov ‘meddles’ with a chess board”.

“Lenin Moreno was elected to continue the program of his predecessor — and primary supporter before the election — former president of Ecuador, Rafael Correa, which included a rejection again by the electorate of neo-liberal economics and an independent course for Ecuador’s foreign policy which included sanctuary for Julian Assange”, the commenter shared, adding that almost instantly after having been elected Moreno exposed his “true colours”.

Specifically, he started to implement neo-liberal austerity principles at home and “behave as a US vassal abroad”, which included threatening Julian’s asylum status.

“Today we saw the extent to which the latter has been pursued, and, not coincidentally, at a time when Moreno’s illegal and corrupt activities are being exposed”, Debar stated, adding that Moreno is doing his best to distract the Ecuadorian people from these facts, that “he’s a crook, he’s a stooge of Washington”.

“There will be more austerity and pain for the Ecuadorian people if he is allowed to continue”, the commenter concluded.

‘Deserves a Statue Instead of Arrest’
Andy Vermaut, a Belgian human rights activist, is sure that Julain Assange knew perfectly what would happen, “as this was published on Wikileaks itself”, however “he must certainly not have been naïve”. Vermaut brought up the fact that Assange had addressed the issue of money laundering practices by the Ecuadorian president, stating that he if had chosen not to, he “would not be honest to his principles”, despite the obvious fact that the Ecuadorian leadership would respond.

“Julian Assange found the search for truth more important than this appointment. He eventually sacrificed himself for the truth. A whole witch hunt has been orchestrated against him. Everyone knows that”, Vermaut stated adding that Assange has been criminalised, whereas he is in actual fact “the hero of the free speech in the world”.

“Shooting at the pianist, who did not write the symphony himself, is a common fact in a lot of countries who say that democracy is the highest good”, Vermaut addressed WikiLeaks’ publication of Chelsea Manning’s cables.

“I admire Julian Assange for his idealism. To me he is a big man. History will tell… he has let the world know the real truth about the war in Afghanistan and Iraq. The so-called precision bombing that did not seem to be so precise… It is a great credit that he started working with the real sources”, the commenter praised WikiLeaks’ founder, sharing his personal belief that his arrest “is not justified”.

Vermaut stressed the Assange deserves “a statue instead of his arrest”, and “the Nobel prize rather than imprisonment”.

Addressing the issue of pro-Assange campaigning around the world, the human rights activist emphasised his certainty that the public “will be entitled to challenge this arrest, because it is very clearly politically motivated”.

Picking up on his extradition concerns, Vermaut remarked that his perseverance to expose the truth “was a thorn in the eyes of the United States, who punctured their propaganda machine, because of a total transparency that he brought”.

“Julian Assange’s dedication is stronger than the power of a system that has lost moral leadership in the world. This is purely after trapping and the failure of this leadership”, the speaker stressed, adding that European countries, equally, “should condemn this if all the statements about human rights were real”.

His vision of Assange’s future doesn’t seem at all positive:

“I fear that Julian Assange will spend a long time in prison and that everything will be tried to get him convicted. Yes, there are political prisoners in Europe again… who serve the Americans as lap dogs”. He views the fate of freedom of expression to be at stake, as well – “everywhere in the US and Europe”.

“That is the fate of human rights activists in this world. Authenticity to be truthful, to remain true to principles, is very often not rewarded in this world. It is therefore a black day for freedom of expression”, Vermaut went on, arguing that the man who is a real doer, rather than speaker will “now pay the ultimate price for his courage and determination”, despite the ubiquitous resistance to the arrest, which is a positive indicator, however, according to the activist.

“This resistance is the ultimate sign that a transformation of society is imminent. We will not remain silent, we will not give censorship a chance and we will all challenge the arrest. The whole world of truth seekers will work with us”, he concluded in an uplifting way.

Following Assange’s detainment by UK authorities, the police confirmed that it had been made “on behalf of the United States authorities,” while Wikileaks condemned Ecuador’s move, stating that it illegally terminated Assange’s political asylum.

Wikileaks’ founder lived in the Ecuadorian embassy after being released on bail by a UK court due to facing rape accusations in Sweden. Stockholm lifted the charges in 2017, but he was still wanted by British authorities for violating the bail conditions by taking refuge in the embassy.