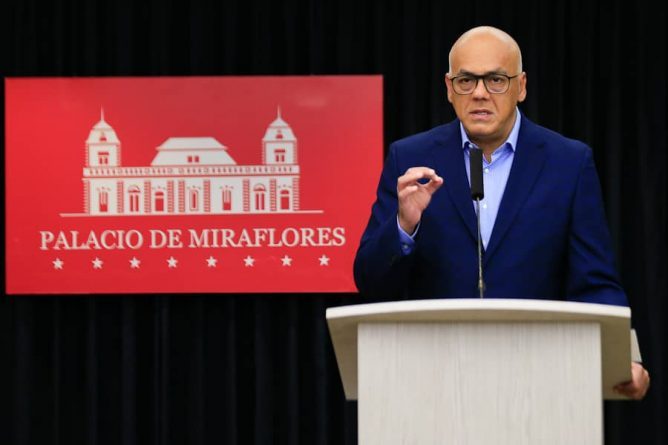 The Vice President of Communications, Culture and Tourism of Venezuela, Jorge Rodriguez, expanded on Thursday the explanation given the previous day by President Nicolás Maduro about the sniper attack on Monday, March 25 at night, which caused the voracious fire in the transformer yard of the Guri Hydroelectric Power Plant, causing the power cuts that have affected the majority of Venezuelans to date. He explained in detail how the National Electric System works.

He explained that, once electricity is generated in the Guayana hydroelectric plants, there are transmission routes of different sizes that carry electricity throughout the country. The largest, he compared with “highways” and have a capacity of 765 kilovolts (KVA); there are medium transmission routes, 400 KVA, and other smaller, comparable with “streets” but that are more numerous, 230 KVA.

They form a very complex network, with stations and substations, which distribute electricity throughout Venezuela. The 765 KVA lines depart from Guayana and cross the center of the country until reaching Yaracuy state.

This electricity is produced by three large power stations:

He explained that the water from the dam passes through the turbines and when they are turned, they produce electricity. That electricity goes to transformation patios and from there it is distributed throughout the country.

The fire, provoked by a sniper, was generated there, in the patios of transformation. “Electricity comes from there, and it’s covered by ceramic insulators, called bushings. Between the ceramic insulators and the cable that transmits the electricity there is oil. This patio rests on 90 thousand liters of oil “.

He indicated that, from hills located between 110 and 150 meters from the transformation yards, it is suspected that a sniper with high caliber rifles and silencer acted, generating the shots that caused the raging fire. The patio where the fire started was located in the middle of all the other transmission yards. Rodríguez believes that the objective was for the fire to spread to these other yards and also “to go down, to be transmitted by the transmission cables”, which would have made the recovery work last months.

Rodriguez said Thursday that the fire was still burning in Guri’s transmission yard, and hard work is being done to replace the equipment and mechanisms to bring the energy to the people. “They are brutal, but we are stubborn,” said Vice President of Communication.

“We should feel proud of the victories we have achieved, but we can not claim victory yet, because they will persist in the attacks,” said Rodriguez. “We are going to persist in our stubbornness, in which peace is the most precious asset along with our independence,” he said.

Rodríguez said that a new phase of reconstruction and total resizing of the National Electric System is coming, to shield it, to establish maintenance, communication and insurance mechanisms for all hydroelectric plants, thermoelectric power plants and substations.

He asked the public to collaborate in saving electricity. Place the air conditioners at 23 ° C, turn off the lights when they are not being used.

Chronology of attacks
Over the last 2 years, the Venezuelan opposition has carried out more than 250 attacks against the National Electric System. However, the March 7 attack was “a brutal attack”, and from it the opposition “was going to continue its criminal homicidal action”. Since March 7 at least 4 sabotages of importance to the Electric System have been perpetrated:

He indicated that all this has caused a counter-offensive by the Bolivarian government to shield it from any further attack.