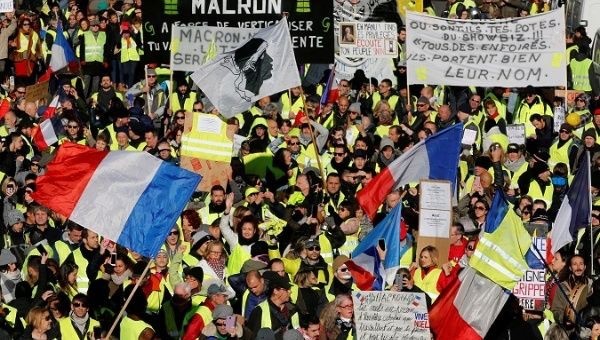 At least 168 protesters have been arrested in Paris. The police have used water cannons and tear gas to disperse demonstrations throughout France.

Thousands of protesters took to the streets of French cities Saturday in the fifth weekend of nationwide demonstrations against Emmanuel Macron’s government, despite calls to hold off after a gun attack in Strasbourg earlier this week.

Police fired water cannon and tear gas in the afternoon to disperse groups of protesters in sporadic, brief clashes with riot police on the Champs-Elysees and adjacent streets.

The Interior Minister said around 69,000 police were active on Saturday with a reinforced presence in the cities of Toulouse, Bordeaux, and Saint-Etienne. According to authorities, the number was down compared to last Saturday. As of 5 p.m. local time, authorities counted 66,000 protesters throughout France. Last Saturday, official forces said 126,000 joined demonstrations.

Protester Loic Bollay, 44, said the protests were more subdued than in previous weeks but the movement would go on until the demonstrators’ grievances were addressed.

“Since the Strasbourg attack, it is calmer, but I think next Saturday and the following Saturdays…it will come back.”

The “yellow vest” movement started in mid-November with protests against fuel tax increases, but it quickly became a wider mobilization against Macron’s austerity policies and reforms that affect working-class people. Students, professionals, union workers, pensioners, and general citizens have joined the movement.

Macron, dubbed the “president of the rich,” has faced several episodes of intense social protest since the beginning of his presidency in May 2017.

During the Yellow Vests’ mobilization on Saturday, Dec. 8, at least 1,500 people were detained and 135 injured.

This Saturday, in Paris, a group of protesters gathered in the Opera square and knelt with their hands behind their heads in a reference to the over 140 students of Mantes la Jolie who were intimidated and humiliated by French police last week. “At the Opera Square, Yellow Vests kneeling with their hands on their heads, making reference to the students of Mantes la Jolie.
At the Saint Lazare Square, students, railway workers, the Adama committee (formed after the murder of a Black youth) are meeting.”

In Paris, where thousands marched in splintered groups, 168 had been arrested until 5 p.m., according to a Paris police official.

In a televised address to the nation Monday, Macron announced wage increases and tax cuts for pensioners in an attempt to end the movement but many said they would maintain pressure.

This Saturday, the Champs Elysees is again the epicenter of the Yellow Vests’ call. All subway lines in the vicinity have been cut off and the bus lines diverted. Various monuments, museums, and Parisian shops have closed their doors.