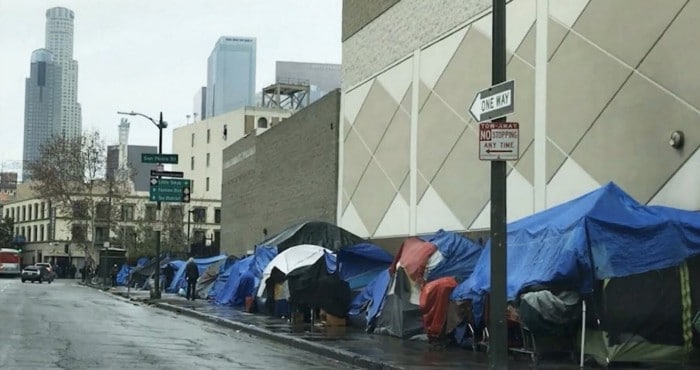 The high-tech sector, along with the U.S. national security state that it partners with, have lately been pushing the idea of upgrading society into a futuristic technological structure that makes life far more convenient. Last year the National Security Commission on Artificial Intelligence, an organization created in 2018 to further the partnership between U.S. intelligence agencies and tech plutocrats, articulated this vision in a document. It called for a near future where the country’s “legacy systems” are replaced with a new paradigm of infrastructure, one that allows for self-driving cars, total home delivery in alternative to retail, and home appliances that can connect to an “internet of things.”

This bright, clean future is already being marketed to us. In recent months, Google has been selling its products to the state of New York amid needs for more remote communication methods during the pandemic. Covid-19 has been making it far easier than before for local governments to implement smart city technologies. The NSCAI has been exploiting the crisis to push through its grand vision for a more convenient new America. In the coming years, we’ll likely see advertising campaigns around these plans that portray them as an improvement in our lives equivalent to the rise of the internet. Washington think tanks have already branded it the “fourth industrial revolution.”

In a society where the introduction of new technologies doesn’t come with the consequence of giving capitalist oligarchs more tools to oppress the masses, there wouldn’t be anything sinister about this. But the surveillance and policing capabilities that these technologies present make the downsides obvious; the NSCAI describes ambitions for blanketing streets with cameras and using the “internet of things” as a tool for tracking people’s moves.

There’s also the factor of how these technological developments will exacerbate the class divide. It’s obvious that in a U.S. economy which is becoming ever more unequal and entering into a depression which could last for decades to come, the rich will be the ones who can most readily afford incredible new luxuries like totally automated vehicles or exclusive home delivery shopping. What makes the plans for normalizing these things so ominous is that unlike was the case during the introduction of the internet or smartphones, the people in charge of this latest technological overhaul have expressed that they intend to distribute the fourth industrial revolution’s gains unevenly.

In 2016, the U.S. Army War College published a document that revealed just how the Pentagon-and by extension the capitalist ruling class-expects who will benefit from the technological advances of the coming years and decades. Their base assumption, as reflected in other Pentagon analyses from recent years, was that growing poverty, unemployment, and instability will continue to further the divide between the rich and the poor. The report predicts that expanding slum conditions will create “a surplus of unemployed males with little to do but join gangs or engage in crime as a source of income. Joining extremist or terrorist organizations might also appear attractive as a way out. At the very least, in the event of some kind of conflict, these young men would provide a pool of potential recruits for those opposing the United States. In short, slums would be an inordinately difficult battlefield.”

As the U.S. military prepares to engage in these armed conflicts with domestic rebels, it acknowledges that the cause of this anticipated civil war is a vastly unequal socioeconomic situation. Like how the Pentagon plans to respond to the climate crisis with military crackdowns instead of substantial efforts to reduce the carbon footprint, the U.S. government plans to respond to neoliberal economic deterioration not by improving people’s living standards but by crushing those who rebel against the capitalist state. This is reflected in the war college document’s statement about how the army will at some point have to “bulldoze the slums” in order to fight the rebel groups.

In the background of this domestic war the ruling class has planned will be wealthy safe havens-zones where the upper classes can still live in comfort amid the great technological luxuries they’ve gained during the fourth industrial revolution. We know this because the war college said it; their report predicts that the conflicts will mainly happen in the less developed “feral” or “fragile” cities, whereas the more developed “smart” cities will be safe.

In a country where rich and poor areas typically exist within the same cities, the U.S. military’s war on the poor won’t take shape in such a clean fashion. The ruling class will have to put up walls of various kinds in order to keep their interconnected enclaves safe from the growing violence and instability of the lower class zones.

RELATED CONTENT: Damned if you do, Damned if you Don’t? US Intel Director Warns all Election Outcomes may be Driven by Russia, China or Iran

These walls are for now mostly invisible. The nature of wealthy urban space itself has often been the tool for keeping out the poor, with lower class people coming under suspicion from police if they enter a place where they’re not meant to be. As class conflict escalates, the policing tools are getting more heavy-handed, and the wall is thus taking on a more openly hostile nature; highly militarized police, mass surveillance, and the erosion of civil liberties have made up the tools used to fortify bourgeois security in the last couple of decades.

The next step will be creating physical walls, which has already been accomplished in some places through gated communities. These structures of separation between the classes will take on a more warlike nature as the potential for violent conflict continues to increase.

The domestic army interventions, curfews, and Gestapo-style arrests that have appeared during the George Floyd protests are merely preparations for the war that the government plans to wage in the event that domestic revolts turn into armed insurrections. The priority of the capitalist state is to defend the existing class hierarchy, which in an unstable future could mean waging a civil war.

This means that for the poor, the technological advances that the system promises will largely mean a greater degree of techno-tyranny. The war college describes that censorship and surveillance will be necessary during the coming domestic conflicts, which are two things that the NSCAI’s technological vision would provide a lot of help for. Only for the rich will this technological leap bring substantial improvements in living conditions. Those outside the smart cities will mainly experience the ways that technology can be used to harm people.