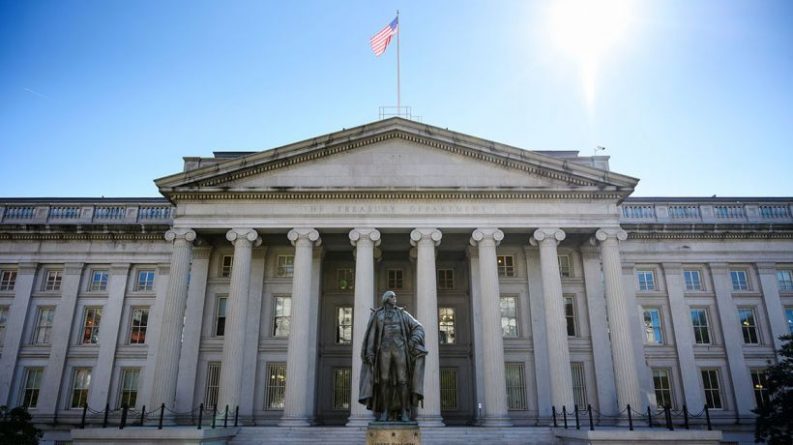 The US Department of  Treasury and its Office of Foreign Assets Control (OFAC) have been the bodies that have articulated and executed the embargo and embargo measures against the Venezuelan economy under the guidelines of the Administration of Barack Obama and Donald Trump respectively.

Its operators and bureaucrats are eventual figures in the exercise of the US government, which is usually occupied by operators, lobbyists and intermediaries between corporations of various kinds and the instances of public power.

Those who currently occupy the main positions in the Treasury Department are members of a new bureaucratic elite in the shadow of Trump, neoconservatives who represent the new status quo that has emerged from the bowels of American power and are a concrete expression of the struggle of elites in the North American framework.

These officials, along with Treasury Secretary Steven Mnuchin, have managed to provide efficiency, without scruples and frights, to a rigorous policy of suffocating the Venezuelan economy and have instrumentalized the decisions of Trump’s National Security Advisor, John Bolton; of Secretary of State, Mike Pompeo; and Trump himself about Venezuela.

Eli H. Miller is responsible for managing the daily operations of the Department in general and the Office of the Secretary in particular. As Mnuchin’s right-hand man, the Chief of Staff works in direct support of the Secretary. According to his public profile on the Treasury Department’s official website, Miller “plays a key role in advising, coordinating and reviewing policy development within the Department, other agencies and the White House, as well as assisting and planning the overall strategic direction of the Department”.

Early in his career, Miller was an assistant to then Speaker of the House of Representatives, John Boehner. In addition, he was the Director of Finance Operations of Donald J. Trump for the legal figure created as a commercial firm to obtain the pro-campaign funds from Trump, President, Inc. In that position, Miller developed and managed the financing process of the campaign together with the Republican National Committee (RNC).

Miller is a young man on the rise. Aggressive operator and aspiring bureaucrat, who despite his youth has managed to position himself in key places and positions of confidence of the Republican Party. For the Trump Administration, the figure of Miller comes as directed by the party and belongs to the sphere of bureaucrats who aligned themselves with the current management in the White House.

Bloomberg referred to Miller as “the right hand man of Mnuchin, who is an unknown commercial war soldier,” for being one of the articulators in the battery of US trade sanctions against China. The financial medium emphasizes, citing sources of former Treasury officials, that Miller “closely controls access to the Secretary and has created a small internal circle.” They define him as cautious and little outstanding in public view.

As an operator in the actions of encirclement and suffocation of the Venezuelan economy, it is important to underline concrete links of this official with others in his own party. Bloomberg notes that Miller worked as a fundraiser for the campaign of Florida Senator Marco Rubio.

As a lawyer, she comes from working as a litigator for the firm Proskauer Rose LLP, known for lobbying in favor of business groups around the world. Mandelker served as Counselor to the Secretary of Homeland Security, where she advised the Secretary and worked extensively in intelligence, national security, counterterrorism and border security matters.

According to her profile on the Treasury Department website, Mandelker is in charge of the development and implementation of US government strategies to “combat the financing of terrorism and money laundering, as well as other policies and programs to combat financial crime”. Supervises the operations and coordinates the actions of the OFAC, the Financial Crimes Enforcement Network (FINCEN), the Office of Intelligence and Analysis (OIA) and the Office of Financing of Terrorism and Financial Crimes (TFFC).

Mandelker is a first level operator. The responsibilities that she occupies place her in a key position to make the scaffolding of the US government apparatus work and its interior projections and also the external front, for which, during the current administration she conducts simultaneously the sanctions and actions that emanate from Washington against several countries.

In strictly bureaucratic and practical terms, her position is much more effective than that of any undersecretary of the Department of State, for coordinating instances that execute the measures of the long US arm.

Mandelker is an advocate of “maximum pressure” actions. She is a promoter of Trump’s foreign agenda that has failed on several fronts, noting that the pressures generated by sanctions have been key to such a supposed “success”. Specifically, she referred to the case of North Korea, a country under decades of US blockade.

“In Venezuela, the Maduro regime continues to undermine democracy, impoverishing its citizens and plundering the country to fill its pockets,” Mandelker said during her speech at the forum “The economic sanctions initiative,” held at the center’s headquarters. Atlantic Council studies, in Washington, in March of this year.

In her public positions on Venezuela, she has legitimized the blockade operations against the Venezuelan economy, affirming, without presenting any further evidence, that the actions from her office are clearly legitimized to attack the “crime family” leading the Venezuelan government, without to this day having shown a single asset confiscated from a Venezuelan leader on American soil, a narrative identical to that of Marco Rubio.

MARSHALL BILLINGSLEA, UNDERSECRETARY OF TERRORIST FINANCING
Marshall Billingslea, financial intelligence operator. Liaison of his office with other security agencies of the US government, foreign governments and private companies around the world. He is one of the developers of the architecture of the blockade against Venezuela for specifying the exact points to determine the closing of accounts and the boycott of the commercial operations of our country.

His profile in the Treasury Department indicates that “Billingslea’s government career includes several positions within the Departments of Defense and State and the Senate of the United States.”

As deputy assistant secretary of the Navy, he was responsible for the planning and defense policy of the Navy and the Marine Corps. Marshall worked in Brussels as Deputy Secretary General of the North Atlantic Treaty Organization (NATO) for Investment in Defense (ASG DI), has been lobbying for the acquisition of technologies and weapons in that entity and as a bureaucrat operator in the operation of NATO in Afghanistan.

He was a member of the senior professional staff for national security affairs in the Senate Foreign Relations Committee, where he oversaw all intelligence and defense-related activities that fell within the scope of the Committee, and was responsible for reviewing all sales of foreign weapons which require the approval of the Committee.

Basically Billingslea is an executor who knows the American and international military network, which reflects his position as a lobbying actor. He has been a key liaison for the collaboration of governments and companies in the region to operate the siege on Venezuela, both because of his position in the Department and because of the relationships he has built from previous positions. He is a promoter of the argument to intervene in Venezuela with the purpose of “protecting” the population.

In October 2018 he declared that “Venezuela represents a clear threat to regional stability and security, in addition to the horrible humanitarian crisis that is unfolding before our eyes.” He made such an assertion in an appearance before the American Enterprise Institute in Washington. “This is a hemispheric issue and the implosion of the regime is a direct challenge for us.”

DAVIS MALPASS, UNDERSECRETARY OF TREASURY FOR INTERNATIONAL AFFAIRS
He is an operator on the external front. Precisely in the current US presidential administration, his office is essential. He is number two at the Treasury. However, his name is best known for being the candidate of Donald Trump to take over the reins of the World Bank. Malpass is an economist, head of the investment bank Bear Stearns, which collapsed during the 2008 global financial crisis.

The Devex website refers to his appointment as a nomination closely attached to the Trump line. Of neoconservative tendency, akin to many of Trump’s positions, including those criticizing globalization. He has been one of the most active elements in the multidirectional measures of the White House in sanctioning with tariffs to several economies of the world in a rearrangement of US trade policy. Foreign Policy magazine when referring to Malpass titled an article like this: “Will David Malpass take the World Bank to ruin”.

Malpass is one of the most relevant actors of the emerging elite that has settled into power with the rise of Trump. He is a bureaucrat in favor of the positions of American business conglomerates that have subscribed the slogan “Make America Great Again” in its strictest sense.

Malpass is a veteran of the Republicans in power. He had already worked in the republican administrations of Ronald Reagan and George Bush Sr., when in 1993 he signed for the investment bank Bearn Stearns. The newspaper El País reviews his nomination to the World Bank stating that “it may be controversial due to his critical comments in the past on multilateral institutions, in line with the skepticism expressed repeatedly by the president of the United States.”

Global organizations such as the World Bank, in Malpass’ opinion, “have become larger and more intrusive” and “the challenge of refocusing them has become an urgency, now more difficult”. Malpass has been a visible face of negotiations with China over tariff disputes. He is openly an adversary of the Asian giant.

In fact, David Malpass accused China in February 2018 of allowing the crisis in Venezuela by supporting the government of President Nicolás Maduro with loans in exchange for oil. In a note published by Reuters at the time, Malpass said that China’s focus on its financing agreements, far from helping, “has hurt Venezuela,” ignoring at the same time that the agreements with China have allowed the bypassing of sanctions imposed by Washington.