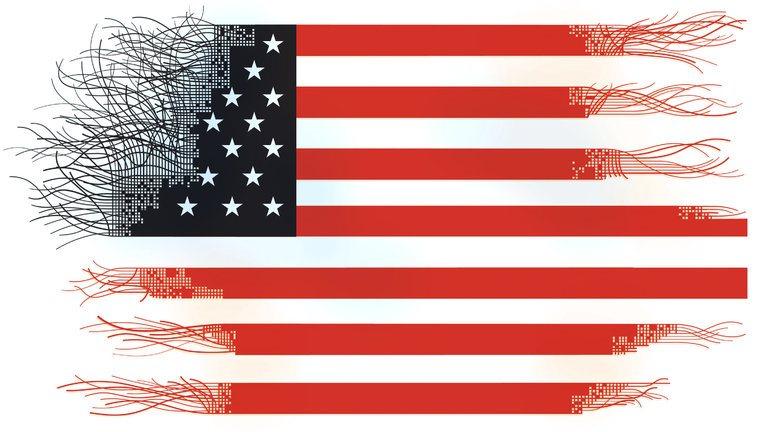 The results of the recent elections in the US shows that the Democratic Party candidate, Joe Biden, won with the largest number of votes in U.S. history – 79.1 million, while Trump, who got 73.4 million, is still proceeding with a complicated legal maneuver to try to get the judiciary system to decide ultimately in his favor. This election served to unmask the crisis of decadence of the imperial power, already badly damaged long before the pandemic displayed the true essence of this irreparable decline.

While all this is taking place, “it’s all the same” has appeared to be the easiest phrase for the general chorus to repeat. That the Republicans and the Democrats are the same is something that should make us reflect, not because of what we have known and suffered in Latin America due to the bipartisan “consensus” on foreign policy, but due to subtleties or nuances impossible to observe, and especially in determining the moment of the imperial decline.

Sixty-one percent of U.S. citizens believe that they are on the edge of a civil war, which should be an indication of a increasingly complex internal situation, where 40 million poor and unemployed people are joined by the former soldiers of the colonial wars of the 21st Century, who have been forced to commit crimes against humanity against defenseless peoples. There are facts and situations happening behind the scenes, especially after the Coronavirus pandemic uncovered what was concealed and hidden, shattering the mirrors showing the most decadent manifestations of the greatest world power in its visible decline, exposing the internal problems in a way that has not previously occurred.

The course of the Trump administration made everything worse, taking the social fracturing to the limits of the tolerable. Elections in the United States have never been carried out in such a complex scenario, both at the local and the world-wide level, nor at a time when the country was faced with protests that continued for more than 100 days in several states, nor with the not-uncommon illegal presence of federal troops in those places.

Portland, Oregon, became a symbol of what was happening, at a time when the U.S. was ranked 109th among 159 countries in terms of inequality, being more unequal than Turkey, Ivory Coast, Qatar, the Philippines or El Salvador – nations close on the scale to the U.S. Then add to this the economic consequences of the pandemic of COVID-19, and the apparent irrational behavior of Trump, though this irrationality has been laboriously crafted and set forth for an important sector of the population, who have been converted into an army of zombies who repeat Trump dialogue automatically.

According to the Conflict Location & Event Data Project, (ANCLED), an organization that analyzes conflicts, “the other alternative for Trump to reduce the margin that separates him from the Democrats, is to try to exploit social tensions, considered the other fundamental variable, and to try to position himself as the defender of law and order.” According to their research, since last May there have been over ten thousand protest marches in the U.S. About 73% of these were related to Black Lives Matter, in which not only African-Americans participated but a broad range of social groups and especially white youth. In every case these began as peaceful marches, calling for justice for race-based killings, but 54% of these were violently repressed by the police.

On the other hand there were about 360 demonstrations against these marches, mostly made up of white supremacist groups including armed militias and the sinister Ku Klux Klan which acted extremely violently. One ACLED report indicates that Oregon is one of the five U.S. states with the highest risk of seeing an increase of activity by armed groups during and after the elections, listing more than 80 right-wing militia groups.

“This does not represent a new phenomenon, but rather a resource exploited by the right-wing over many years. The problem lies in the limits to which they are prepared to go in encouraging these contradictions, above all because the president’s strategy is not yielding the results they expected,” states ACLED. “The negative wave is another symptom of how the crisis of confidence has eroded our society.”

There are a great many factors that determine that now, as never before, nothing is the same, and even more so in a foreign policy in the hands of the most fundamentalist old-fashioned right-wing conservatism that led the Trump government to break key international agreements and withdraw from international organizations with a disrespect for international legality that has exceeded all former limits. His advisors for Latin America were gathered from the most decadent, terrorist, and mob-associated lobbies of the region, and the shadiest personages in U.S. history, like the Cuban-American lobby in Miami. The same has occurred with the Middle East, with Trump son-in-law Jared Kushner representing the hard-liner wing of the fundamentalist Israeli lobby. The results are plain to see. The “it’s all the same” line would be valid if we could act as though nothing had happened in the world, or as if the situation inside the United States were not what we can plainly see to be the reality.

RELATED CONTENT: Sanctions Against Venezuela Will Continue Under Biden

If this is about the U.S. relation to us in Latin America and the Caribbean, in spite of a series of coups (some of them failures), attempted invasions, the silent invasion of the Foundations of all kinds and the imposed media dictatorship, the uprising of the peoples as a continuation of the anti-neoliberal rebellion of the end of the 1990s and the beginning of this century, then it is evident that this is also reaching the absolute limits of the tolerable, and that what is now in question is our survival.

It is like what Fidel Castro once said about volcanic eruptions – the coronavirus pandemic that has turned the world upside down is acting as a powerful social wake-up call, an unexpected determinant that obliges us to reflect more profoundly, to return to the reality that is exploding in front of our eyes and to cause some of us to be profoundly introspective – that is to say, to look inside ourselves in a way that is collective and detached from a destructive individualism and the colonial traces left in our culture – and finally to rescue ourselves.

The explosion of the people, extending through the countries of our region and of others in the world, is unstoppable; it makes quite evident the lack of political direction, at the same time that it makes unity an urgent necessity for the peoples who are rising up, risking their lives, and winning in the streets the rights that belong to them. The re-colonizing attempts are too late and too out of date. There is no more room in the world for the pseudo-democratic fictions. The consequences of the pandemic uncovered the schemes of lies and exposed criminal social inequality, intolerable in the 21st Century. The technological revolution, until now utilized to suppress human beings and convert them into simple robots and not to serve them, now will convert into a trap for its absolute owners.

They believed that they would be able to digitize life and death, that we would be defenseless before that type of virus, but the tangles and confusions of technology and the dehumanization that it attempts to produce have not been able to overcome the human imagination, and never will. Still less will it be able to deal with millions of hungry people, encouraged by advertisement to consume, to lose their class identification, while leaving them helpless, naked and with empty hands at the entrances to the walls of the powerful. Of course, in the case of the United States, Joe Biden is not Trump, nor is he Bernie Sanders, but the movement that Sanders represents is on the rise and the Democratic Party cannot get rid of it. These are changes that we cannot ignore.

For us, for the countries dependent on the empire – except Cuba- it may make no difference which one gains power, as long as we ourselves do not remain the same. And that is the key point. Either we decolonize ourselves at high speed and unite to resist plans to re-colonize us, or we free ourselves – if we can learn how to take advantage of the weaknesses of the empire in decay. The claws of capitalism in its most savage state are definitely more visible and more predictable, compared to other more undercover forms of appropriating our awareness, of perverse capture and domination of huge sectors of our society condemned to poverty and indifference. The 21st Century should bring our liberation. The peoples of the Americas are showing us the path to follow. And the United States has also entered a period of turmoil, to the point that it appears to be a “banana empire.”