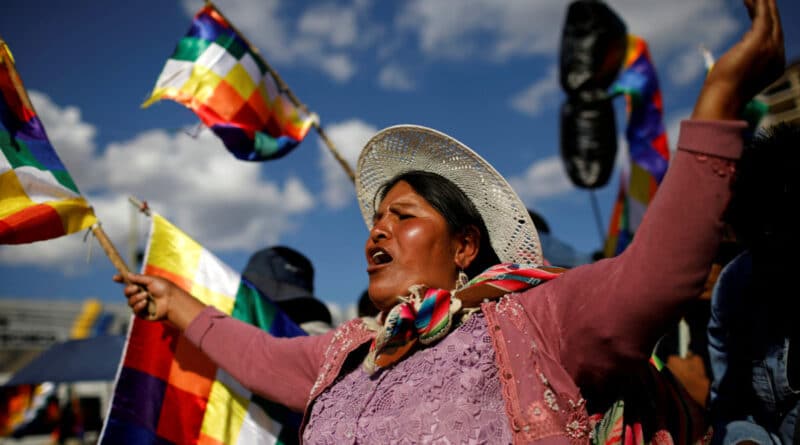 Towards a History of the National-Popular in Bolivia is an outstanding work by Bolivian sociologist René Zavaleta (1935-1984), who was Minister of Mines and Petroleum during the period of the Nationalist Revolutionary Movement (MNR) government after the 1952 Revolution and later director of the Latin American Faculty of Social Sciences (Flacso). In it, Zavaleta analyzes the question of space and territory in the formation of national identity, as well as the historical exclusion of indigenous movements in Bolivia.

A posthumous work, since the author died two years before its publication, Towards a History of the National-Popular in Bolivia is an essay in three parts, which chronologically covers the historical period between the War of the Pacific (1879-1893) and the Chaco War (1932-1935). In it, Zavaleta addresses the problem of the formation of national identity in Bolivia, highlighting its specificity as a country with a majority indigenous population, in contrast to the same subject and period in other countries of the region, such as Chile, Uruguay or Argentina. In the first part, “The Battle for the Surplus,” Zavaleta deals with two decisive moments in Bolivian history: the War of the Pacific on the one hand, and the Federal Revolution, or Bolivian civil war of 1898, on the other. The second part, “The World of the Terrible Willka,” analyzes the different conceptions of the Bolivian nation through the political thought of the leaders of the time, emphasizing the confrontation that took place in the Federal Revolution between the historical figures of Pando and Willka. In the third part, “The Stupor of the Centuries,” Zavaleta critically examines the role of the oligarchy extracting natural resources, offering a complex representation of the strategy and ideology of the dominant elites.

Throughout the book, the author highlights the role that the exploitation of natural resources and their integration into the world economy played in the formation of national identity, through an oligarchy that survives over time and whose concerns are individualistic. These were leaders whose main interest was personal profit, rather than the welfare of the majority, with the example of the tin barons and the representative figure of Simón Iturri Patiño. “During the entire period there was not a single President who was not to one degree or another linked to the mining companies, with the exception of Busch and Villarroel, who already belong to the phase of dissolution and decadence of that State.” Zavaleta states that, in order to exist, on the one hand, the State needed an “ideology of legitimization or emission,” and, on the other, an “ideology of the world of identity, or of self-reference.” Regarding the latter type of state ideology, Zavaleta defends the idea that a “unanimity in self-representation” was necessary, giving the example of Chile, whose mirror is the European model. And he affirms that the Bolivian oligarchy, by failing to impose this ideology of identity, demonstrated the failure of its national project.

The lack of national vision is what, according to Zavaleta, would explain in large part the oligarchy’s lack of concern for the loss of territories during wars, such as access to the sea in the war against Chile, and later the fatalism and defeat in the Chaco War. Thus, quoting the Bolivian president, “for Salamanca sovereignty was the Chaco, not history. It seemed to him compatible with the whole mining idea of space.” The author analyzes the issue of space and territory in the formation of national identity and in relation to the dominant ideology based on free trade. Thus, he comments that because of “the disdain for space (…) the love for everything foreign, the oligarchic sub-strata will begin to distinguish themselves as pro-North American… The jungle Indians are determined in the middle of the manigua, and therefore do not exist for Brazil as a State, but when they obstruct it, because it is a technical deformation, not an ethical one.”

As its title indicates, the other prominent place in the work is occupied by the popular classes, which in the case of Bolivia are mostly indigenous. Thus, the contradiction of a political class that at the end of the 19th century approached the indigenous question in a similar way to that of the other elites of Latin American countries appears, with the difference that this racist discourse of subjugation of the indigenous peoples was already coexisting with the suspicion that “nothing happens in Bolivia without the participation of the Indians.” [1] But these words of Pando are misleading, because they did not reveal a recognition of the indigenous cultural identity, but the attempt to instrumentalize it. Indeed, according to Zavaleta, Pando was only seeking the support of the indigenous masses on the federal side of the war, for his own ends. In reality, his idea of “participation of the Indians” did not reveal a vision of society, but rather the cynicism of the war, since its real objective was quite the opposite, that is, their subsequent exclusion. Thus, the work explores and develops the question of the historical exclusion of indigenous movements in the formation of national identity in Bolivia. To this end, the author quotes the statements of the main leaders of the political elite of that country. The contradictions of the “oligarchic state”, as the author puts it, in which anti-Americanism (in the sense of regional unity), anti-Indianism (in a racist sense) and pro-Europeanism (in the sense of belief in the superiority of Western values), elements that were to give rise to the formation of a national identity, are also highlighted. But the context favored a climate of discrimination and exclusion of the popular strata, and in particular towards the Indians, which was exacerbated and reached a climax in the Federal Revolution, with apparent contradictions: “Things came to mean two things… it was not known whether to save or kill the Chuquisaqueños, whether La Paz was protected by the Indians or encircled by them.” Zavaleta then quotes Pando: “the Indians started (…) a war of extermination of the white race,” and then highlights that “Pando, Montes and Saavedra, the three major La Paz figures of the liberal-republican era” all agreed that “Willka meditated the uprising of the Aymara people of the Republic.”

Indeed, the oligarchy feared the revolts or “Indian uprisings,” their participation in elections, and developed an imaginary based on internalization. Finally, “not only the facts, but the words speak of two homelands and not one: there is the Bolivia of Fernandez Alonso and Pando, the other is the Indian homeland, that of Willka.” Thus, the anti-indigenism of the Creole elites, represented in the discourse of Moreno or Pando, was confronted with a concrete reality, the attempt at political emancipation of the indigenous, which with the Aymara army of the “fearsome Willka,” a military man under the orders of Pando, would not take long to impose itself as a fundamental and full component of the national identity, through millenarian ideologies [2] based on the indigenous cultural vindication. Almost a century later, this current would find its reflection in Katarism.

In conclusion, Zavaleta highlights an original conception of the nation, thus prefiguring the constitution of a Plurinational State, which would see the light of day with the government of the Aymara trade unionist Evo Morales as of 2006. “Bilingualism is identity. It is a popular solution. There are forms of economic life in common that are not mercantile.”

The contribution of the work is the fundamental idea that the exporting oligarchy was not capable of developing an inclusive vision of the nation and that, inevitably, only the masses, faced with the exploitation and plundering of the mining companies, could play a counter-hegemonic role, developing a national-popular identity. The period in which this new irreversible hegemonic vision was inaugurated would be the Revolution of 1952. Let us recall that the context in which the author conceives and writes the work, in the early 1980s, was prone, on the one hand, to debates about the specificity of indigenous social movements as inescapable protagonists of the revolutionary popular classes, and on the other, to historical criticism about their inclusion by traditional leftist parties in a reductionist social category, the working class. Indeed, in the 1970s several testimonies and essays were published on the role of the indigenous movements. [3] Therefore, the referential framework of the work must be kept in mind, since its author was a protagonist of the historical process initiated with the Revolution of 1952. In fact, the objective of the work was to cover the entire history from the beginning of the 20th century to the 1980s, but the author’s death prevented him from completing the last part of his work. Being a posthumous edition, numerous notes that the author was unable to complete should have been included and would have provided contemporary readers with some necessary historical references.

3] For example, the essay “Paysans écrasés, terres massacrés,” by the ecologist René Dumont, is representative of the awareness and concerns of the time, in particular with a chapter in which the author addresses the misery of indigenous peoples in Ecuador and their struggles for land. It was published by Ed. Robert Laffont, Paris, in 1978.