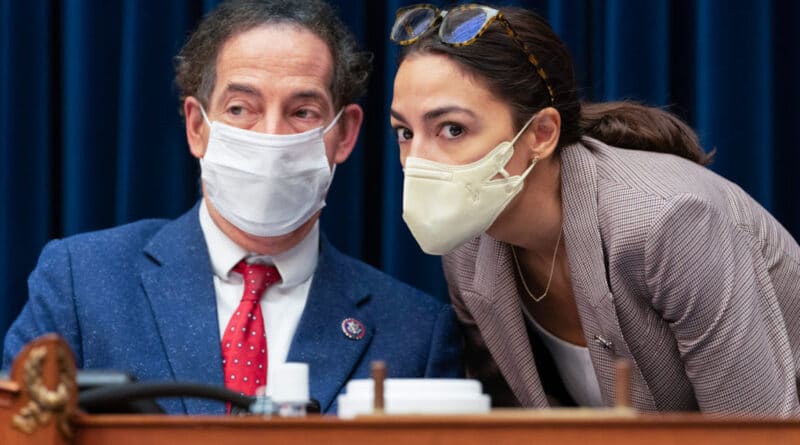 The COVID-19 pandemic has demonstrated that not even the most “progressive” elected officials in the U.S. are willing to do what is necessary to meet the needs of the people.

Members of Congress departed for a seven-week vacation at the same time that the Center for Disease Control’s (CDC) national eviction moratorium expired on July 31. The Squad, a subset of members of the House of Representatives who espouse Bernie Sanders’ policy agenda, gathered at the Capitol building to demand that Congress come back to work and hold a vote to renew the moratorium. Cori Bush, Jamal Bowman, and other Squad members slept on the Capitol steps overnight as part of the ongoing protest. Critics on social media pointed out that the rally was too little, too late while others remarked that the low attendance of the rally, comprised mainly of political surrogates, rendered the action nothing more than a photo opportunity for the Squad.

Founder of Black Agenda Report (BAR) Glen Ford died three days before the protest. Ford strongly opposed the politics of diversity, which privilege political representation over substantive policy demands and the popular power required to achieve them. He closely monitored the Congressional Black Caucus (CBC) to demonstrate that voting for elected officials who look and behave like their constituents does not necessarily equate to representation. Ford led BAR’s effort to expose how the CBC, for example, voted in large majorities to militarize U.S. police departments and enshrine their officers with protected class status under federal hate-crime legislation.

The Squad rose to prominence following Barack Obama’s two-term presidency. Obama represented the pinnacle of diversity. Obama was famously touted as a victory in the long, hard struggle of Black Americans for human rights, yet his administration greatly expanded the theater of the U.S. war machine and enacted a broad policy agenda friendly to the rich. Bernie Sanders’ 2016 presidential campaign emerged from the economic discontent once encapsulated by Occupy Wall Street — a protest movement that Obama’s DHS and FBI brutally repressed at the tail end of his first term. In a pivot away from protest, an increasingly left-leaning Democratic Party base placed their energy into electing “progressive” members of Congress.

Talking the walk
The Squad combines the politics of diversity with a politics of spectacle. Unlike Obama, who openly chastised Black Americans and separated himself from the Left, the Squad professes to stand with working people and “walk the walk.” U.S. Representatives Cori Bush and Alexandria Ocasio-Cortez (now better known as AOC) frequently identify themselves as organizers in a bid to relate to their young, left-leaning supporters. This was evident in their response to the expiration of the eviction moratorium, which has left more than 11 million Americans at risk of eviction. The Squad took to the streets as organizers in the hours before the policy ended despite offering little more than statements in the months leading up to July 31.

Even worse, the Squad has struggled just as much as the rest of the Democratic Party to articulate just who is to blame for the negligence surrounding the eviction moratorium. Members of the Squad have been hesitant to cast full blame for the crisis onto House Speaker Nancy Pelosi or President Joe Biden. AOC told journalist Chuck Modi that the Biden administration failed to respond to the Supreme Court order in June indicating the need for congressional involvement until just days before the moratorium expired.

“The House was caught off guard by the White House’s statement, there was some resistance in the House and members literally started getting on planes”

AOC on last month since court order to Biden to call on Congress. (Sat.) pic.twitter.com/jEM1hA6SQs

Cori Bush explained to journalist Max Blumenthal that she didn’t know why Joe Biden had not issued an executive order to renew the eviction moratorium and said that the crisis “wasn’t about” Nancy Pelosi. AOC’s assertion that the Squad doesn’t subscribe to a theory of change that posits one must be nice to the powerful to get what you want is seemingly at odds with their unwillingness to directly challenge Democratic Party leadership in a moment of crisis.

I asked Rep. @CoriBush about the rally she helped organize, why it happened so late in the game. She said she has been pushing for months for the White House to extend the moratorium. pic.twitter.com/EUtWyLqbgE

In truth, the Squad has been more than amenable to the establishment wing of the Democratic Party. Instead of participating in public protests over immigration policy, as was the case during the Trump administration, the Squad has limited itself to sharp statements now that Biden is deporting undocumented immigrants at a rate far higher than the prior administration. Last year, AOC called Nancy Pelosi the “Mama Bear” of the Democratic Party despite the fact that majorities support a third-party alternative to the current electoral duopoly. And not one member of the Squad was willing to force a vote for Medicare For All during a deadly pandemic in exchange for their support of Nancy Pelosi’s bid for speaker of the House.

The Squad’s politics of spectacle
Such stark contradictions speak to the differences between political spectacle and political substance. Political spectacle feigns support for the interests of working people (i.e., organizing a small protest of the eviction moratorium or tweeting daily about the ills facing the working class) while failing to take the necessary action to ensure that the interests of working people become a material reality. Millions are at risk of eviction in the middle of an economic recession and a pandemic. More than 500,000 people at any given moment are homeless in a country with 17 million vacant homes. If members of the Squad were interested in substantive political action, then they would use their leverage to force demands such as housing for all upon their colleagues and hold continuous rallies until these demands were met.

The Squad’s loyalty to the politics of spectacle is further underscored when imperialism enters the debate. Imperialism is a litmus test for anyone who claims the title of “left” or “radical.” While AOC and the Squad have cast votes against the U.S.’s bloated military budget, they have failed to make the issue of militarism a priority issue. On numerous occasions, members of the Squad have repeated the State Department’s racist narratives about Venezuela, Syria, and other countries targeted by U.S. sanctions and military interventions. AOC has even stood with the fascists responsible for the destructive coup in Bolivia in 2019.

Crises reveal the true character of social systems and the governments that manage them. The COVID-19 pandemic has demonstrated that not even the most “progressive” elected officials in the U.S. are willing to do what is necessary to meet the needs of the people. Millions are at risk of homelessness amid the spread of COVID-19’s Delta variant, yet not one member of the Squad has proposed freezing rent or seizing vacant housing stock from the banks to ensure everyone has a roof over their head. In the U.S. the politics of spectacle reign supreme. Mass movements must build alternatives to the Democratic Party to strengthen their base of popular power moving forward.

Daniel Haiphong is an activist and journalist in the New York City area. He is a Contributing Editor of the Black Agenda Report, Co-Host of The Left Lens and co-editor of Friends of Socialist China.