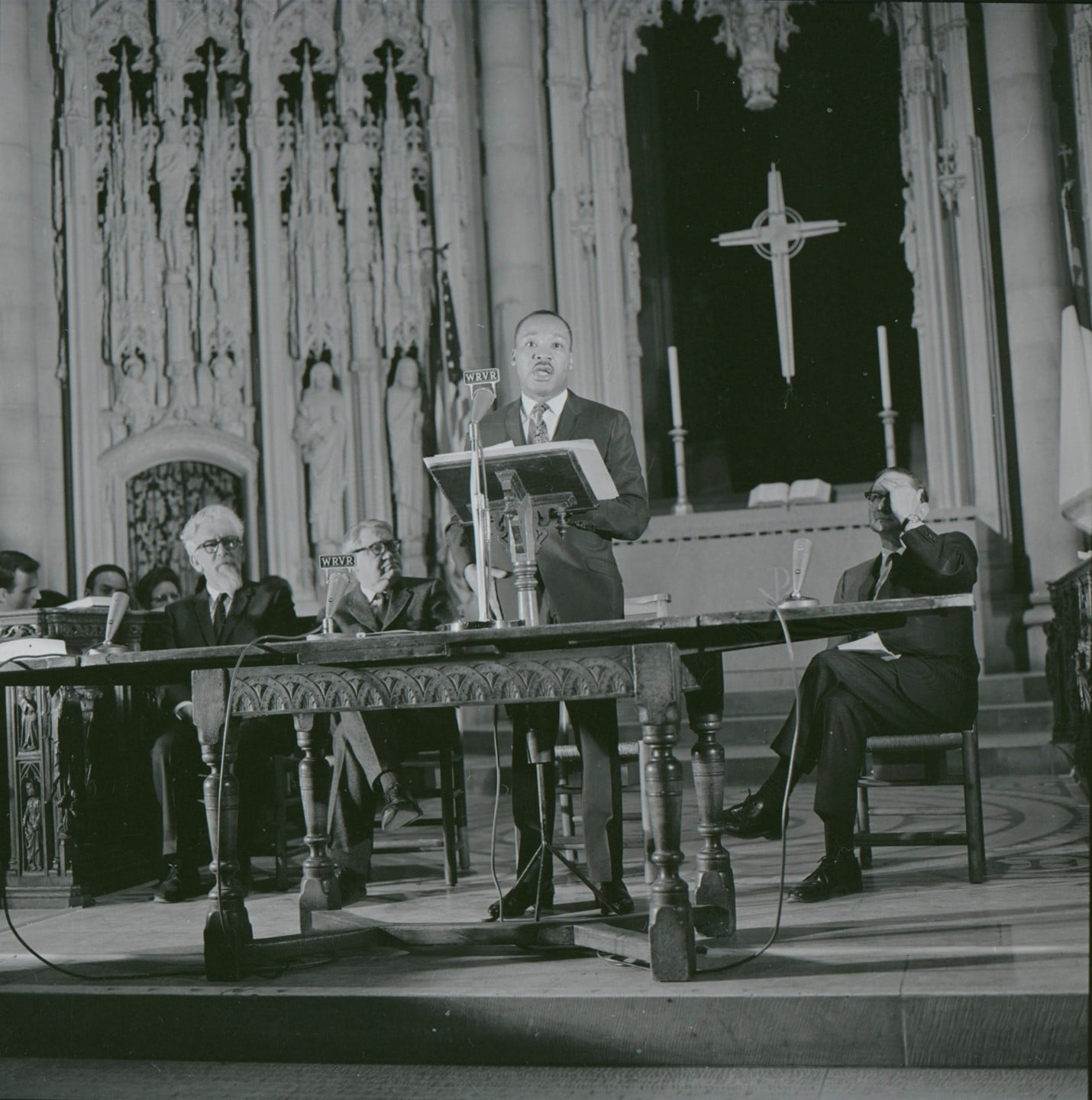 It is disheartening to hear movement leaders say they are inspired by Martin Luther King while also supporting the U.S. proxy war against Russia. Like all wars it endangers the lives of civilian populations, enriches the military industrial complex, and robs Americans of public resources. Once King chose an anti-war stance he did not waiver in his condemnations of U.S. empire.

On April 4, 1967 Dr. Martin Luther King, Jr. gave one of the most significant speeches of his career. In “Beyond Vietnam – Time to Break Silence ” King declared his unequivocal opposition to the war in Vietnam. His very public break with Lyndon Johnson was greeted with derision, including from his own allies, who believed that the president was an ally who should not be attacked. The NAACP board passed a resolution calling King’s statement a “serious tactical mistake” that would neither “serve the cause of civil rights nor of peace.” The media joined in the condemnation, with the New York Times characterizing his comments as “facile” and “slander.” Even Black newspapers such as The Pittsburgh Courier judged his remarks to be “tragically misleading.”

It is important to remember this speech in which he declared that the United States was “the greatest purveyor of violence in the world today.” There are individuals and organizations who routinely claim King’s mantle until they fall prey to the war propaganda promoted by the present day purveyors of violence.

The Rev. Dr. William Barber is sadly one such person. In an April 30, 2022 email on the subject Moral Clarity About Our Own Atrocities he made many specious arguments on the issue of war as it pertains to U.S. policy in Ukraine.

“To see the butchery at Bucha or the massacre at Mariupol and do nothing would be to forfeit any claim to moral authority. We know this instinctively. It is why, despite the political gridlock on Capitol Hill, Republicans and Democrats have acted swiftly to approve historic military aid to Ukraine. In the face of such a moral imperative, it would be anathema for either party to ask, “How are we going to pay for it?”

There is no independent investigation of what the Biden administration and corporate media label as “massacres.” No one who claims to act in the interests of humanity should praise the historic levels of military aid to Ukraine, an oligarchic kleptocracy under U.S. control which depends upon military and police support from openly neo-Nazi formations. So blatant are the connections that in past years members of congress have moved to ensure that these groups are denied U.S. aid .

Furthermore, Rev. Barber ought to know that questions of funding for domestic needs must always be raised. Joe Biden is requesting $33 billion in aid to Ukraine, which means money for the military industrial complex, after ending stimulus payments and other support for struggling people in this country. Barber opens his email with the story of a woman who lost children in her care to a child welfare agency after the termination of the child tax credit program plunged her into poverty. It is disturbing to see Barber’s attempt to have it both ways, demanding help for the poor while also supporting the system that keeps them in their condition.

The child tax credit which kept families afloat disappeared, along with enhanced unemployment benefits, anti-eviction protection, and free covid related treatments to the uninsured. The much vaunted Build Back Better bill is dead and Biden seems uninterested in resurrecting it. It is reasonable to ask the Biden administration for a monetary accounting  and for an explanation of how their actions led to a humanitarian disaster for the Ukrainian people, mass theft from Americans’ public resources, and a risk of hot war with the Russian Federation.

Barber and the Poor People’s Campaign are preparing for a  Poor People’s and Low-Wage Workers Assembly and Moral March on Washington and to the Polls taking place on June 18, 2022. His ill conceived email was meant to bring attention to this event but instead he brought attention to the deep connections that liberal politics has with right wing forces. Barber is not alone in his capitulation as members of congress who claim to be progressive march in lock step with imperialism and austerity which create suffering in this country and around the world.

Then again, perhaps Barber was directing his words to people who support the anti-Russia proxy war in Ukraine.The non-profit industrial complex and the Black political class have cast their lot with the democratic wing of the war party. At this moment they all demand obedience to the status quo which gives a veneer of concern for low wage workers who suffer because of military adventurism personified by the anti-Russia proxy war in Ukraine. What better way to kill two birds with one stone than to mobilize for the poor while also praising what King called the “giant triplets of racism, extreme materialism, and militarism.”

It is sad to see the name Poor People’s Campaign, which was launched by Martin Luther King, being used to support the war machine. It is even sadder to see a man like Rev. Barber succumb to the very worst narratives of American exceptionalism and demonization of another nation.

“As we all watch the unfolding tragedy in Ukraine, Americans are aware that the main difference between us and the Russian people is that we see the truth of the human slaughter that is hidden from them by Putin’s propaganda.”

RELATED CONTENT: Ukraine: How the US Empire Uses Propaganda to Turn People Into Monsters

The U.S. is rife with propaganda emanating from the state and corporate media. What truths do Americans recognize and expose? Sadly, too many of them believe that their nation is superior to Russia while knowing very little about that country or how living standards there compare to theirs. Do Russian police kill three people every day? Do Russians have medical debt? Are they consigned to lifetime debt peonage after attending university? Military spending in their country is a fraction , less than 10%, of what the U.S. spends. Despite all the stories of Russian atrocities and human rights violations it is the U.S. which invaded and occupied Iraq and Afghanistan, destroyed Libya in a proxy war, and now is helping its ally Saudi Arabia practice a genocide in Yemen.

We cannot separate the treatment of the marginalized from the foundational inequities present in this country. Barber cannot get justice for the poor and also uphold the contradictions he mentions. His words are troubling and frankly sad. Ignoring their harm is to give them undeserved credence.