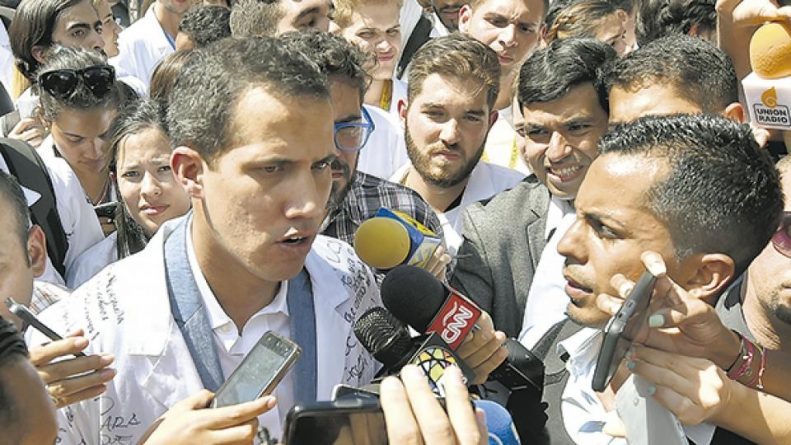 January 30 was the confirmation of the unprecedented terrain in which Venezuela finds itself: cameras from all over the world in search of the “interim president Guaidó”, a city that had overflow of support to assert its desire that the “new president” wherever it should be, that is, at the Miraflores Palace. The reality was again disconcerting for those who hold that idea, were literally handfuls of demonstrators, and a short appearance of Guaidó surrounded by about fifty people. The journalists of the big media looked at each other without understanding.

Is that all? They could only make close ups?

In turn, Guaidó wrote on his Twitter: “Today # 30Ene Venezuelans went out again to raise our voice, to meet again in the streets and show that we can change the country.” Earlier, he showed his happiness for the call Donald Trump had made, who also tweeted to celebrate yesterday’s “mass mobilization”.

The distance between the international construction, social networks, and what is lived in the country is immense. It didn’t happen what was supposed to happen after a week of self-proclamation. Guaidó continues without territory, without being able to rule over anyone, without being recognized internally or waking up the support that he should have, and he is closer to ridicule than tonpower. The Venezuelan expression to qualify it would be “smoke pot”.

However, this same January 30, the European Parliament advanced in its non recognition of Nicolás Maduro, affirming through Antonio Tajani, that Guaidó happened to be “the only interlocutor”, and that from today it will be recognized as president. Along with that, the diplomatic rooms continued their coup, with the meeting of Julio Borges, a fugitive deputy, with several senators in the United States. Borges will assume the representation of the “government of Guaidó” before the Lima Group.

The untimely has enlarged. Any person who walks in Caracas with common sense and honesty could not say that this is a broken country where a party has decided to move forward in appointing a new president, and that this new government has a foot anywhere.

This situation indicates two central points. In the first place, it corroborates that the construction of Guaidó has been armed from the outside through a powerful communication and political operation. For now do not look for answers at the national level to understand what is to come. The few announcements that Guaidó has made have been for the international: appoint representatives in different countries, receive calls from the United States, announce that they are preparing to enter humanitarian aid.

This means that the plan, and hypotheses of what may be to come, should be sought in the corridors of the White House. Each day reinforces that thesis. The decision and the direction comes from abroad. How did the right get to this situation? It would be necessary to carry out an analysis of the last years, its accumulation of political failures, as well as political / cultural trends that come from decades and centuries. On the other hand, analyze the current policy of the USA. Regarding Latin America, its need to build a seamless control with governments such as Mauricio Macri or Iván Duque, in a context of geopolitical disputes that have their correlate in the continent, centrally in investments. Second, that the national picture presents a high instability. The cooling of the street that followed January 23 does not mean that they can not resume a series of actions. Most likely, they will do it when the order arrives. It will be through two dimensions.

One, through its most active social base, with which the right maintains a dangerous pact: it only manages to summon it for actions that involve removing Nicolás Maduro from the Miraflores Palace. The rest generates whistles, rejections, lack of participation. They have created a support that only responds to the so-called coup leaders. They know it, and it is part of the negotiation that Guaidó has with its expectation that it has created and the logic built over years.

Two, through the activation of armed groups in popular neighborhoods. According to the investigations carried out in the same territories and official sources, it is known that the price per person per night to go out and put together a focus of violence is 30 dollars. That in the case of areas where it is a question of generating popular support, an uprising that has not occurred anywhere, and exploiting the few images with great capacity through social networks. A brief focus turned into a Twitter trend has a high impact on the social base that Guaidó seeks to convene.

In contrast, in other territories, where the objective was to confront armed forces with state security forces – with grenades, short and long weapons – the price was approximately 50 thousand dollars, then distributed to the interior of the contracted band.

Those scenarios could return the moment the right wingers propose to activate them – it does not mean they succeed. Violence is an integral part of the siege and assault scheme. To understand how they calibrate it seems necessary to link them with the times set to achieve the goal. The danger of the right can be to erode its social base, while it can be a cooling product of the lack of clear calls and a sustained inconsistency of Guaidó if it continues without having anything new to say or show.

In this context, the joint position of the governments of Mexico and Uruguay that decided to convene an international meeting for February 7 to address the issue of Venezuela is contrasting. Dialogue seems to be the only way to defuse the explosive situation that is in full swing, with the active complicity of governments, large media and underground forces. But what if it doesn’t happens? Maduro will not give up! An open war with paramilitary mercenaries?

Those who lead the conflict against Venezuela are approaching dangerous limits. Guaidó, the first 2.0 president, a real fiction, seems a pawn in a scheme that has put him in that place.