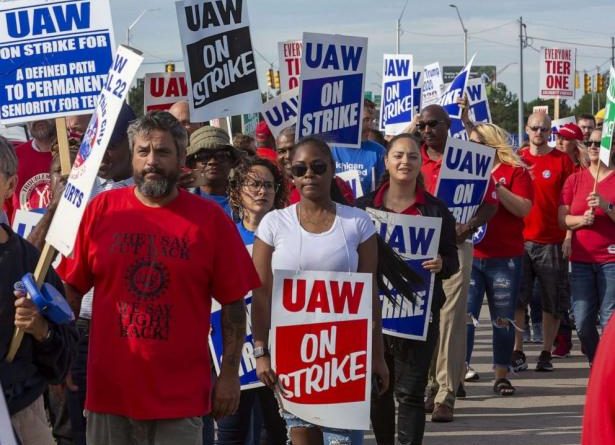 The picketing GM workers and impending Chicago Teachers Union action suggest a dramatic revival of striking as a tactic.

Friday night on the picket line at the General Motors facility in Langhorne, Pennsylvania involved pizza reheated over a firepit, supporters dropping by with beers and snacks, and a dance party to Carly Rae Jepsen. It was the eighteenth day of the strike, which shows no signs of ending as of this writing. Spirits were surprisingly high despite the cold. Strikers in their UAW shirts and supporters were cutting up pallets for firewood, and planning a potluck for the following weekend. “Maybe it’ll be a victory celebration!”

The strike at GM, now at twenty-three days the longest in decades at an American auto manufacturer, came as a surprise even to longtime labor observers like me. Certainly, the workers have ample reasons for anger. GM’s CEO made $21.87 million last year while the workforce is splintered into tiers (new hires who do the same work get paid less than longtime employees) and dotted with permatemps. But because the action of the strike has been all but dead in U.S. manufacturing for decades, a massive strike at one of the Big Three car companies has seemed like a pipe dream.

Yet now, the workers are dug in, holding picket lines twenty-four hours a day and determined to see the end of the tiered system and the use of temps, and a revived though still small left is determined to show solidarity.

Of course, we’re still nowhere near the strike frequency levels seen before Ronald Reagan’s crushing of the air traffic controllers’ union in 1981. Acts of rebellion in recent years have been more likely to be occupations, uprisings, the kinds of dispersed mass protests that spread virally from city to city, as in the Occupy movement and the Movement for Black Lives. The Trump era brought back the mass march, alongside more disruptive actions like the airport protests in response to the Muslim ban. But the strike, long considered gone, is creeping back into favor.

RELATED CONTENT: “We are not robots!” Amazon Workers and Their Supporters Stage Strikes and Protests Worldwide

It was the Chicago Teachers Union in 2012 that revived the strike in dramatic fashion, defeating state and city officials determined to make teachers’ strikes a thing of the past. In the process, it provided a template for a reshaping of public sector unions that have allowed those unions to survive the 2018 Janusdecision, which ruled that union fees in the public sector are unconstitutional. The teachers struck “for the schools Chicago students deserve,” and rallied the community to their side. They reminded us all what it looks like when city streets are filled with workers making demands.

In the years following the CTU strike, reformers took over teachers’ unions from Massachusetts to California, and a strike wave rippled across “red” states, evoking the history of the mine wars in West Virginia, the 2011 uprisingin Wisconsin, and the CTU and turned near-nonexistent unions into a winning political force.

Now, the Chicago teachers are on the verge of another strike. There’s a new mayor in office but the same issues prevail, and this time they might takesupport staff and park district workers with them, as SEIU Local 73 stood side by side with the CTU leadership in announcing a joint strike date of October 17.

“The park districts are one of the greatest places for kids to go,” Chicago teacher Kenzo Shibata explained to my colleague Michelle Chen last week. “Sometimes the school board likes to rely on the park district when teacher strikes happen, for day care. That might not be a possibility this time around.”

A joint strike will be harder on parents, Shibata, who is a parent himself, noted. But it also shows the combined power the public sector workers hold in Chicago, and besides, he said, “I’m willing to make any kinds of sacrifices that need to be made to ensure that my son and my students have a nurse in the school every day.”

The idea of a general strike was floated in the days after Trump’s election, mostly by people who were disconnected from the actual process of labor organizing and anxious to not be too disruptive. But perhaps the teachers have taught their students well, since young people determined to act against climate change have embraced the idea of the strike.

A recent poll found that one in seven teens in the U.S. have participated in a school walkout, and unlike the school walkouts of my own era (against the Iraq war, for example) many of those students conceive of their walkouts as strikes.

Unlike the school walkouts of my own era against the Iraq war, many of students today conceive of their walkouts as strikes.

Many would quibble about whether walking out of school has the same impact as walking off the job (though in an era where the public sector is the leading source of strike action most strikes are not, in fact, halting production in the same way that the workers at GM are). But the students are quite clear as to why they’re using the s-word. “It’s important for us to think about our history and the history of worker movements, and us calling it a strike does that,” eighteen-year-old climate activist Matthew Fleming told Kate Aronoff.

Signs carried at the climate strikes around the world featured a combination of teenage sass and a keen understanding of the connections between school, their future as workers, and the foreclosure of that future by climate crisis and capitalism more broadly. Some noted acidly, “We’ll go to school if you do your jobs,” but others asked, “Why go to school to prepare for jobs we won’t have?”

Students in Chicago and elsewhere organized students’ unions in the wake of teachers’ strikes, and many of them embraced disruptive tactics beyond simply walking out of the classroom, like holding blockades in front of local high schools. They understood that strikes alone are unlikely to be enough to overturn systems of power and that solidarity is going to necessitate more than sending pizza. Crackdowns on Extinction Rebellion protesters in the U.K. and France’s gilets jaunes are just a hint of what might be in store as activists escalate. If the strike builds in power again, in other words, the mine wars may not be just something to evoke on picket signs.

But at this point, the GM workers are standing firm on the lines, against expectations. Union leadership became gun-shy for decades after Reagan’s frontal assault, but the UAW’s members are reminding us all of what the Chicago teachers knew and the climate strike teens are learning: it is the people acting together who are the union, and solidarity is what it will take to win. 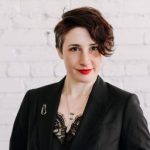 Sarah Jaffe is a regular contributor to The Progressive and a reporting fellow at the Type Media Center, covering labor, economic justice, social movements, politics, gender, and pop culture. She is the author of Necessary Trouble: Americans in Revolt, and the co-host of the podcast Belabored.  She is currently working on her second book.

Sarah Jaffe is a regular contributor to The Progressive and a reporting fellow at the Type Media Center, covering labor, economic justice, social movements, politics, gender, and pop culture. She is the author of Necessary Trouble: Americans in Revolt, and the co-host of the podcast Belabored.  She is currently working on her second book.