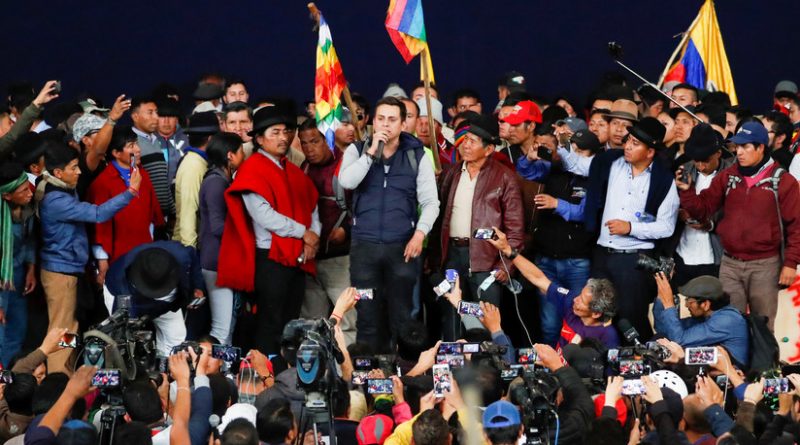 Thursday, the Confederation of Indigenous Nationalities of Ecuador (CONAIE) called on the Armed Forces (FFAA) to withdraw their support of the president of the country, Lenín Moreno, after denouncing the strong repression by the uniformed to the protests against the “paquetazo”, that has caused several dead.

The request was made by spokespersons during a popular assembly held at the Casa de la Cultura in Quito, capital of the country, where they have confirmed that there will be no negotiations with the government until the economic measures that triggered the protests are repealed.

In a statement, CONAIE also points out who is currently supporting the government: “The business class which sells the homeland and is pro imperialist, wants to secure loans from the International Monetary Fund (IMF) so that its debts, its crises, will be paid by the working class, the indigenous people and the popular sectors.

RELATED CONTENT: Ecuador: What do Venezuelan Migrants Say About the “Lazybones Revolution”?

“With the blood of our brothers we are not going to negotiate, there is no business, with this nefarious, lying, thief government,” said CONAIE president Jaime Vargas.

CONAIE denounced on Thursday the death of two of members who died on Wednesday, amid protests in Quito. The deceased were identified as Inocencio Tucumbi and José Rodrigo Chaluisa, whom they plan to honor at that assembly.

In turn, as a measure of pressure on the government, eight police officers, seven men and one woman, have been detained. As reported, one of the uniformed was captured at the scene as an “infiltrator.”

In the popular assembly, the indigenous movement has had the detainees speak; they have said they are in good condition.

In a national broadcast, José Augusto Briones, general secretary of the Presidency, demanded the release of the police.

Protests have been held in Ecuador for eight days. The CONAIE, which has carried the flag of the demonstrations, asks the government to repeal Executive Decree 883, which allowed the elimination of the state subsidy for extra and ecopais gasoline and diesel.

Moreno took the measure in response to a loan granted by the IMF to the country, amounting to more than 4,200 million dollars, as confirmed by the Minister of Economy, Richard Martinez.

Also, they ask that Defense Ministers Oswaldo Jarrín be removed from their posts; and from the Interior, María Paula Romo, due to the police and military repression suffered these days.