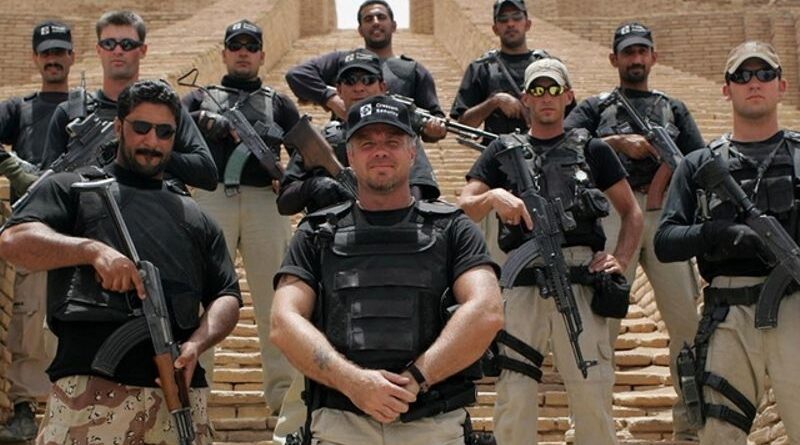 The real story is much more than an adventure starring a Canadian hero.

A CBC story about an ex-Canadian soldier who helped dozens flee Afghanistan ought to have considered the role of the private security industry in the disastrous 20-year-long war in that central Asian country. The large number of private security companies (PSC) in Afghanistan received barely any media attention, leaving Canadians ignorant of a controversial element of the foreign occupation.

In “How a guy known as ‘Canadian Dave’ helped get 100 people out of Afghanistan in final days of Taliban takeover” Judy Trinh writes about David Lavery helping get some of those gathered near the Kabul airport on to flights. A founding member of elite special forces unit JTF2, Lavery coordinated with veterans in this country to get over 100 individuals with Canadian papers out of the country.

The widely circulated story mentioned that Lavery operated a PSC, Raven Rae Consultancy, with some 50 Afghan employees. But a broader look at Raven Rae and PSCs was omitted from the article and most media reports about Afghanistan. According to its site, Raven Rae entered Afghanistan in 2010. It was one of thousands of PSCs that entered Afghanistan during the US and NATO occupation. According to private security industry researcher Anna Powles, Afghanistan “has been a gravy train for the global private security industry for the past two decades.” The US, Canada and other NATO countries dished out billions of dollars to PSCs.

Some have suggested the Afghan military’s quick collapse was partly due to the withdrawal of PSC support. “It was their [PSCs] departure that led to the erosion of the capability of the Afghan Air Force elements, which were critical,” a former senior US commander in Afghanistan told Foreign Policy. “But how could they have been left behind when our forces that provided ultimate security for them were withdrawn?”

At the height of Canada’s 13-year military mission in Afghanistan Saladin, DynCorp and other PSCs had larger numbers of armed men than most of the NATO countries occupying Afghanistan. In 2008 Canadian Brigadier General Denis Thompson explained: “Without private security firms it would be impossible to achieve what we are achieving here. There are many aspects of the mission here in Afghanistan, many security aspects that are performed by private security firms that which, if they were turned over to the military, would make our task impossible. We just don’t have the numbers to do everything.”

The federal government spent tens, maybe hundreds, of millions of dollars on PSCs. They paid $10 million for private security to guard Canada’s “signature” $50 million aid project to repair the Dahla dam in Kandahar province. The federal government contracted Saladin to protect its embassy in Kabul. Saladin also helped secure Prime Minister Stephen Harper during a visit there in 2007 and protected forward operating bases in Kandahar province. Saladin has a troubling history. Its predecessor, KMS, trained and possibly equipped Islamic insurgents battling Russian forces in Afghanistan in the 1980s and it sent mercenaries into Nicaragua as part of the Iran Contra Affair.

Private security firms in Afghanistan were poorly regulated. Many Afghans believed PSCs participated in crime and the large numbers of armed men from different groups made them feel insecure. Afghans told Swiss Peace Foundation researchers that PSCs behaved in a “cowboy-like” manner. After a Canadian officer was killed by a PSC employee in August 2008, Canadian Major Corey Frederickson effectively concurred, explaining that the “normal contact drill [for PSCs] is that as soon as they get hit with something then it’s 360 [degrees], open up on anything that moves.”

The invasions of Afghanistan and Iraq helped propel Montréal based GardaWorld to be the world’s largest privately held PSC. In recent weeks hundreds of the Montréal company’s employees have been evacuated from Afghanistan.

With over 100,000 employees worldwide, Garda regularly advertises in Esprit du Corps calling on the magazine’s Canadian Forces readership to “translate your military skills into a Gardaworld career.” A number of former Canadian officers were in the upper echelons of Garda. The head of Garda’s Afghan operations, Daniel Ménard, previously commanded Canadian Forces operations in Afghanistan. Ménard had been court-martialled for having sexual relations with a subordinate in Afghanistan and recklessly discharging his weapon. While he worked for Garda, Ménard was also engulfed in controversy in Afghanistan. In 2014 he was jailed for allegedly smuggling guns. Two years earlier two other Garda employees in Afghanistan were caught with dozens of unlicensed AK-47 rifles and jailed for three months.

Garda was also involved in numerous violent incidents in Afghanistan. In 2019 three children were among a dozen killed when a minibus full of explosives crashed into a Garda SUV carrying foreign nationals in Kabul. The same year the Taliban attacked the complex where Garda’s offices were located in an incident that left 30 dead. The Kathmandu Post reported that Garda illegally shortchanged the family of a Nepalese employee killed in the attack.

There are few regulations constraining Canadian PSCs’ international operations. Unlike the US and South Africa, notes “Beyond the Law? The Regulation of Canadian Private Military and Security Companies Operating Abroad”, “Canadadoes not have legislation designed to regulate either the services provided by Canadian PMSCs [private military security companies] operating outside of Canada or the conduct of Canadian citizens working for foreign PMSCs.”Furthermore, Ottawa has not signed the International Convention against the Recruitment, Use, Financing and Training of Mercenaries and has been little involved with the UN Human Rights Council’s Working Group on the use of mercenaries.

The foreign military pullout and Taliban capture of Kabul has decimated the large PSC industry in the country. Yet most Afghans are likely happy to see the end of private mercenary forces and hired guns dominating their country. This development has gone largely unreported by Canadian media.

The CBC owes Canadians a discussion of the role private security forces played in Afghanistan.