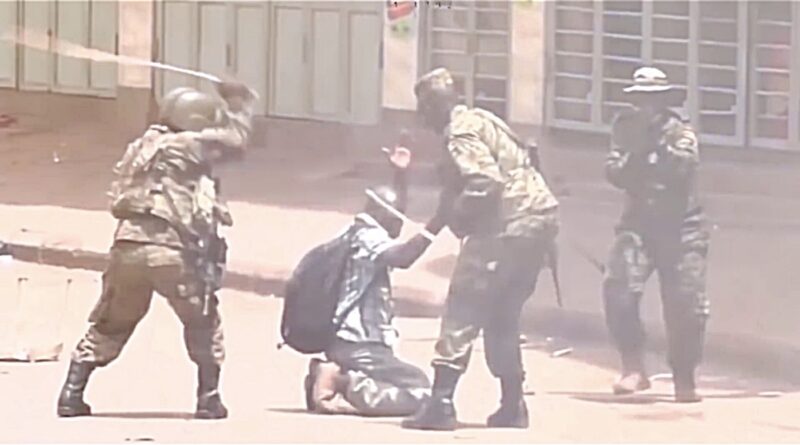 As imperialism has run its machinations within the different conditions of the world, it’s turned these places into different types of tools for innovating in necro-politics. Israel is the U.S. empire’s laboratory in repression, with the brutal anti-Palestinian tactics of the Zionist forces being used to train police in the U.S. and Colombia. Latin America is the empire’s laboratory in the paramilitary facets of this repression, with the death squads in countries like Colombia being replicated in domestic U.S. militias like the Proud Boys and the Three Percenters. And Africa is the empire’s laboratory in destabilization, along with the partitions, Balkanizations, manufactured ethnic tensions, terrorism, dictatorship-building, and economic warfare which this chaos allows the imperialists to wreak upon the continent.

Now that the empire has lost neo-colonial control over Afghanistan with the Taliban’s defeat of the U.S.-installed regime, the imperialists are fully applying their tactics for Africa to Afghanistan. Washington is scrambling to freeze Afghanistan’s wealth, with the existing sanctions on the Taliban now being applied to the country as a whole. This has further deprived one of the world’s poorest countries of the ability to gain humanitarian aid for its population, which comes at a moment when Afghanistan is facing catastrophic hunger, homelessness, and economic ruin due to global warming and twenty years of war.

The imperialists have applied the same strangulation approach to Syria, using economic warfare as a means to sabotage the post-war rebuilding effort. This will no doubt be what comes from the sanctions expansion within Afghanistan. And they aren’t even done wrecking Afghanistan’s infrastructure, businesses, and housing; despite the narrative that the war is over, private U.S. mercenaries have replaced the official troops and are there to stay within the country. The imperialists are also fomenting new (and old) terrorist proxies within the country.

Such is the approach that Washington is applying to African countries like Ethiopia, which has come under U.S. sanctions due to its government’s infrastructure projects with China. These sanctions, currently being intensified through the recent additional economic restrictions which Washington falsely claims only target military elites, come after the imperialists have partitioned the country as a means for stoking terror. Following Ethiopia’s formation of Marxist-Leninist governance in the 1970s, the U.S. rallied the forces of counterrevolution to fight for the breakup of the country, which they succeeded at with the Ethiopia-Eritrea partition following the Soviet Union’s fall.

RELATED CONTENT: “I Was Living Like Scarface”: The Ludicrous Costs of the War in Afghanistan Revealed in New Documents, Testimonies

Now the U.S. is backing the terrorist organization the Tigray People’s Liberation Movement, which seeks to regain the control it had over Ethiopia for two decades following the Ethiopia-Eritrea partition. This isn’t speculation. This is something Eritrea’s foreign minister has said the U.S. is doing, stating that the Biden administration is “stoking further conflict and destabilization” via interference and intimidation throughout the region.

The goal of these transgressions, he said, is “to resuscitate the remnants of the TPLF regime.” The fact that the U.S. is refusing to classify the TPLF as a terrorist organization, and treating it as belonging on equal footing with the Ethiopian government, makes this destabilization campaign even clearer.

These maneuvers give a sinister context to the recent propaganda pieces that NATO’s media outlets have been putting forth about Ethiopia. This year, the BBC published a call for further action against the Ethiopian government, written by one of the counterrevolutionary fighters who helped destroy the country’s socialist development. The piece, titled Eritrea viewpoint: I fought for independence but I’m still waiting for freedom, even goes so far as to glorify the author’s acts of violence against the revolutionary gains the masses had made:

I joined the liberation army as a 16-year-old in 1982 after hearing tales about Ethiopian aggression and jealous of the glamorous image of the freedom fighters with their long hair, shorts and AK47s. I received a few months of training in the Arag valley. We learned how to attack and retreat, how to camouflage ourselves, and how to use weapons — including grenades and RPGs. Our training was good. It was backed up by political education, including how we would establish a democratic government…Official statistics show that healthcare and education have improved since independence but it is difficult to believe them. With limited job prospects and the prospect of years of compulsory unpaid military service, many young people continue to leave the country, seeking asylum in other African states or Europe. But many of us have not given up hope. We believe change is inevitable and Eritrea will realise the promises made by its martyrs.

Whatever contradictions exist within the Ethiopian government — and there are obviously many, since it’s a capitalist neo-colonial state despite trading with China — they won’t be addressed by these fomenters of anti-communism, Balkanization, and destabilization. The country’s growing hunger is in spite of what China has done for the country, and Washington’s sanctions are exacerbating the Ethiopian government’s failures to mitigate the effects of global warming and civil war.

What the imperialists want to come from their agitation propaganda and economic strangulation is a situation that parallels the breakup of Yugoslavia, where ethnic tensions were manufactured through the CIA’s strategic propaganda designed to sow mistrust among the different ethnicities.

If it’s successful, Washington will have an excuse to reopen the drone operations site within Ethiopia that it closed down in 2016. This would parallel the situation Washington has created in Somalia, where U.S. and U.K. meddling has created the same terrorist groups Washington is now targeting with bombs and drone strikes. This is a situation where Washington’s militaristic solution to the very extremism it produced is only worsening Somalia’s humanitarian crisis, and where the empire can carry through its true goals for Africa: expand AFRICOM as a buffer against Chinese and Russian influence, while deliberately keeping the region unstable so that China won’t be able to fully implement its Belt and Road Initiative infrastructure plans.

What further shows that Washington can’t bring “democracy” to Ethiopia is the fact that it’s backed African dictatorships from Côte d’Ivoire to Uganda, the latter of which recently massacred dozens of demonstrators and publicly beat journalists to crackdown on pushback to its sham electoral process. The dictatorship’s police forces did this with U.S. training and firepower. And Washington has responded to Ethiopia’s real or alleged abuses with vastly more severity than it’s applied to Uganda after these world-shocking human rights abuses, paralleling how Biden has barely responded to this year’s police massacres of protesters by the neo-colonial Colombian regime.

RELATED CONTENT: Beijing Accuses US of Making an ‘Imaginary Enemy’ of China & Demands Lifting of Sanctions During High-Level Talks

Dictatorship, or “democracy” so absurdly rigged that it’s functionally indistinguishable from dictatorship, are the only forms of government which U.S. imperialism brings when it succeeds at building states.

In the age of imperial decline, climate catastrophe, and pandemic, state-building is a prospect that Washington can’t manage as much as it used to. So in places like southwest Asia, the horn of Africa, and Latin America (where countries like Haiti and Nicaraguahave been getting destabilized by U.S. meddling), they’re instead simply leaving the people without functional states after destroying their nations. If they succeed at a Yugoslavia nation-killing project in Ethiopia, they’ll make it like Libya, which has been experiencing decade-long civil war and refugee slave trades.

“This is a moment to seize,” said Tony Blair after 9/11. “The Kaleidoscope has been shaken. The pieces are in flux. Soon they will settle again. Before they do, let us re-order this world around us.” The order they’ve since created is an engineered anarchy, a disorder.

Blair, who’s now being paid £1 million a year by a United Arab Emirates organization called the Mubadala Development Fund, has an interest in deepening the disorder; Mubadala has been developing a plan to mine Afghanistan’s $1 trillion worth of natural resources. With the narrative backing of the U.S. media, the imperialists are now supporting a second Mujahideen insurgency, this time against the Taliban that the original U.S.-backed Mujahideen evolved into. They’re also covertly backing the East Turkestan Islamic Movement, which Washington took off the terrorist group list last year to the effect that it’s since undergone a massive rise in manpower, arms, and funds. The new Mujahideen are there to steal the minerals for imperialists like Blair, and the ETIM is there to perpetrate chaos so that the BRI can’t develop in Afghanistan — and, the imperialists hope, make their violent Uyghur ethnic nationalism spill across the border into Xinjiang.

Terrorism is all the imperialists have, especially now that their loss in Afghanistan has further shaken the world’s faith in Washington’s ability to project power compared to China. As China’s Global Times has assessed, Washington’s demonstrable failure in Afghanistan has made other countries, especially in Asia, less willing to go along with the empire’s cold war on China:

The image of the US debacle at Kabul airport is worth a thousand words. It is believed the Southeast Asian countries which have undergone enough geopolitical tests are clear about this….So far, none of the countries in Southeast Asia, which have sharp insight, show willingness to take the lead in provoking China. The US’ coercion and coaxing in this region have come to show signs of failure…The “Afghan effect” is, in fact, already starting to take effect in Southeast Asia. Singapore’s stance has become more neutral compared to years ago when it used to tilt toward the US, while Vietnam has separated the South China Sea issue from the overall Vietnam-China relations. All these prove that Southeast Asian countries are prepared for the “Afghan effect” in advance, let alone Vietnam that has vivid memories of the “Saigon moment.”

As the Biden administration’s attempts to diplomatically strong-arm China continue to fail, with the strategically important powers in the Oceanic hemisphere growing neutral or even anti-U.S. in the Washington-Beijing cold war, the imperialists will expand their destabilization campaigns to these countries as well. They’ve already done this in Myanmar, where the imperialists are sowing conflict and systemic breakdown in parallel to Libya. But this will serve to further discredit Washington on the international state, leaving the imperialist powers with less allies and more global proletarians who see revolution as a practical necessity.