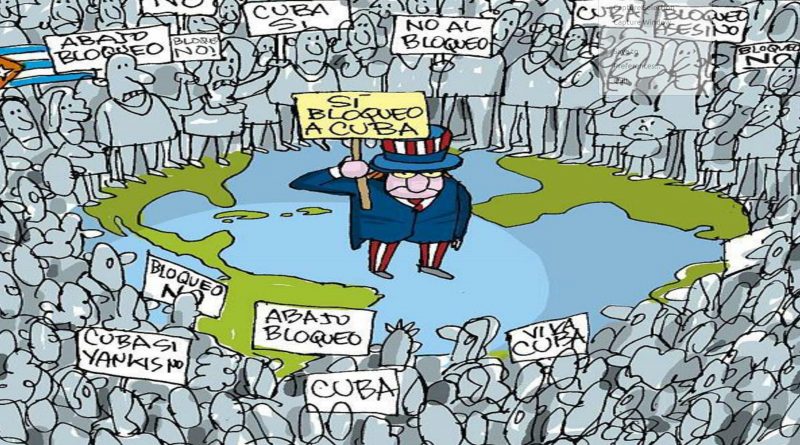 Once again the international community represented at the United Nations General Assembly on November 7 has spoken and voted to reject overwhelmingly the financial and economic blockade (embargo) imposed by the United States against Cuba through unilateral sanctions. The US blockade has been imposed in an escalating progression over the last 57 years with the most damaging rapid increase in the last few months under the Trump administration. Yet, Cuba thrives socially and internationally, if not economically. Despite the undeniable negative impact of the blockade on the population, by and large the majority of Cubans are confidently committed to resisting and enduring. But what motivates that courageous resilience and the international support for Cuba?

The UN vote was on a resolution presented by Cuba based on its report titled “Necessity of Ending the Economic, Commercial and Financial Embargo imposed by the United States of America against Cuba”. The vote resulted in 187 in favor of ending the US blockade of Cuba, 3 (US, “Israel” and Brazil) against, and 2 (Colombia and Ukraine ) abstained.

This is not the first time that such a vote has taken place and therefore it should not catch us by surprise. A similar vote has been called for the last 28 years where Cuba has received majority support. In 2018 only two nations voted against, the United States and “Israel”.

The reason for Cuba’s persistent international denunciation of the US-driven blockade is that it is illegal, unfair and harmful to all Cubans. In just one year from April 2018 to March 2019 it has brought losses to Cuba for US$4.3 billion.

The Obama administration had eased restrictions on remittances and travel to Cuba, which led the way to reopening embassies in Washington and Havana in 2014 and to Obama’s visit to Havana in 2016. With the exception of the embassies that remain open, the Trump administration has reversed those policies and added more. In 2018, former US National Security Advisor John Bolton included Cuba in what he called the “Troika of tyranny” together with Venezuela and Nicaragua. But more threatening has been the activation for the first time since 1996 of the section Title III of the Helms-Burton Act that allows Cuban-Americans and US citizens to sue Cuban companies and potentially foreign companies in US courts for “trafficking” in properties legally nationalised by the Cuban government. Most nations have accepted compensation, the US has refused.

Unfortunately, there are no consequences for any of the US actions, or following such an overwhelming international condemnation, which speaks to the ineffectiveness of a dysfunctional United Nations as a balancing force for the maintenance of fairness and justice for those nations that are unable to defend themselves from aggressive and threatening nations. The UN cannot even defend effectively its own Charter that is trampled daily.

It would be tempting to focus our criticism on the institutional inadequacy of the UN in enforcing accountability for the members’ actions even in clear cut cases as the illegal US sanctions on Cuba, or on the dozens of other cases around the world for that matter. However, we choose to focus on the positive outcome of the vote because this is a success story that is not happening by accident and it is important to understand the secret of Cuba’s success.

I have asked myself many times, how has this small nation survived actions of terrorism, invasions, ostracism from sister nations, sanctions and other interferences since 1959 and more severe ones since the early 1990s, and still managed to politically defeat the most powerful country in the world for almost 60 years? Besides the many political arguments that can be brought to bear, for me there is one factor that stands out. One factor that has a stronger human element and a lesser political one: international solidarity.

Solidarity is a notion that is frequently used by people on the left of the political spectrum. In fact, in some case it may have a rebellion connotation, which may explain why rightwing politics seldom use the word. Cuba has made solidarity a central piece of its foreign policy as stated on its website, that is grounded in respect, genuine cooperation, and shared aspirations; it embraces causes rather than self-interests, and is capable of producing long-lasting connections that are stronger and more meaningful than diplomatic ties. It is a relation where people, rather than ideology, are at the centre of policies.

RELATED CONTENT: Is the Blockade Against Cuba a Bilateral Problem?

Examples of Cuba’s people-oriented international relations are shown by its readiness to be part of regional institutions that promote cooperation over competition like ALBA and CELAC, but perhaps its single most valuable international solidarity contribution is provided by the medical missions of around 50,000 doctors to about 67 countries in the most remote areas of the world. The first Cuban medical brigade was sent to Argelia in 1963. But the most outstanding medical collaboration as an expression of solidarity and internationalism happened in 1998 after hurricane Mitch hit Central America, especially Honduras and Guatemala. To be clear, in some cases for Cuba it is also a source of revenue for the services it provides. For instance, in the case of Venezuela, Cuba is remunerated with much needed oil in a fair cooperative exchange.

The World Health Organization has praised the Cuban primary health care system as fundamental to providing good healthcare, and criticism of the Cuban medical cooperation has been defended.
The Cuban Minister of Foreign Affairs, Bruno Rodriguez, has harshly denounced at the UN the upsurge of US hostile aggression and made a special mention of the lies about the medical international cooperation used to sabotage and “attack a program based on genuine conceptions of South-South cooperation.”

Ultimately nations are on their own fighting back political aggression, however, there is such thing as international solidarity that can be used as an effective counteroffensive. To the extent that solidarity is a unifying concept that provides cohesive strength as in the case of Cuba, Venezuela, Bolivia among other nations, the US has only one tool to break people’s unity, and that is the use of lies through its controlled corporate media. We have seen numerous examples of that.

However, as the UN vote has just shown, lies don’t always work. 187 nations (out of 193 UN member States) have supported Cuba (and by implication condemned the US). Many of those nations have likely received Cuba’s solidarity through its medical missions and understand the meaning of cooperation.