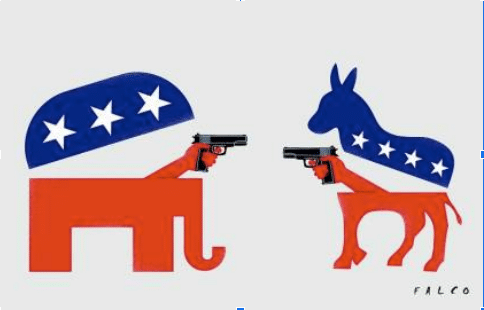 THE UNITED STATES is polarized, it is divided in two, nobody knows for sure which portion will prevail over the other. Meanwhile, a small part remains indecisive, not exactly independent, perhaps more or perhaps less manipulable. This too cannot be discerned precisely.

Something seems more real than ever a few days before the elections of November 3 -possibly the most contested in its history, and certainly unprecedented due to an environment of pandemic and seclusion and, at the same time, streets full of protesters of one or other ideological sign.

Who dares to predict the winner between a Donald Trump ready for re-election—mounted on the Republican elephant, announcing a sweeping step and also a willingness not to accept negative results—and the well-positioned non-entity presidential challenger Joe Biden, on social media networks that sway to the beat of the democrat donkey?

RELATED CONTENT: The US Presidential Elections and the Prospects for Peace

The deep segmentation augurs a greater number of popular votes to count. Already the amount of those issued by mail or in the advanced modality —75 million, according to the United States Elections Project (USEP)—indicate that a voter record will probably be established, when one of the characteristics of a usual election in the US is the abstention of millions.

Many of those millions do not believe or are not interested in their democracy; Millions of others cannot attend because they vote on a working Tuesday and they must work for their livelihood, the boss does not give them permission to be absent, much less will he pay them for the day (as can be seen, a modernity of the Helena genesis of democracy, where slaves didn’t count).

Anything else to know? Yes, the fundamentals. What are the votes that count in this sui generis democracy ?

In the American electoral system, in fact, the election of the President is indirect. It is done by the Electoral College, 538 delegates chosen by the political parties, well, by the Republican Party and the Democratic Party—the other political groups, as we would say in Cuba, neither click nor cut, they simply do not take them into account.

The candidate who wins the popular vote in each of the fifty states of the Union wins all of the electoral delegates of that territory, who have the obligation to vote for that winning candidate, although they do not have the obligation to do so either. Those are the ones that count, and you need at least the magic number of 270, which the states add up in proportion to the number of their inhabitants.

As you can see, the citizens who voted for the other candidate do not count. This is the truth of the real story that I tell you.

The direct popular vote only elects mayors, governors, senators and representatives to the House.

Am I not making sense? I understand, it is difficult to conceive, believe, or admit, because it’s the opposite of any democracy.

Let’s take a very recent example: the elections on Tuesday, November 8, 2016, which led Donald Trump to take over the White House and millions of Americans to take to the streets waving a statement: “He is not my president,” because they had voted for by Hillary Clinton.

RELATED CONTENT: Poll Finds Just 15% of Americans Confident in US Democracy, as Partisan Divisions Only Grow Ahead of Presidential Vote

62,984,828 voted for Trump, and 65,853,514 Americans voted for Hillary Clinton, almost three million more; However, Trump obtained a majority in key states that provide the largest number of electoral votes and took them all in them, he obtained 304 delegate votes, as they’re called, and with them, the presidency.

In 2016, 47.2 million Americans voted early in person or by mail, a figure that has already been exceeded by far in 2020. Photo: Reuters

In 2000, the same thing happened to Democrat Al Gore: despite having won the popular vote by about 500,000, he lost the election against George W. Bush, who obtained the majority of the electoral votes. In those controversial elections, the state of Florida, with its twenty-six electoral votes, gave the victory to Bush, the son, after a manual recount of several counties and many complaints of fraud and irregularities, although it only counted 327 popular votes more than Al Gore, and he took the cat into the water…

This November 3, 2020, we will see what happens. More than 75 million Americans have already voted early or by mail, an additional 200 million could do so on Tuesday, if they go to the polls in defiance of Covid-19. It will be difficult to have the result that same day and, do not doubt it, tensions will grow in “Disunited States”.

In Philadelphia, the largest city in Pennsylvania, which exhibits its rich history the Liberty Bell and Independence Hall, where the Declaration of Independence and the United States Constitution were signed, has three nights of ringing curfew.

Thousands of protesters have taken to its streets after the shooting death of the African American Walter Wallace at the hands of the police. The young man held a knife that he did not want to drop and almost a dozen shots made him “comply with the order,” when he fell lifeless on the pavement of the supposed cradle of democracy.