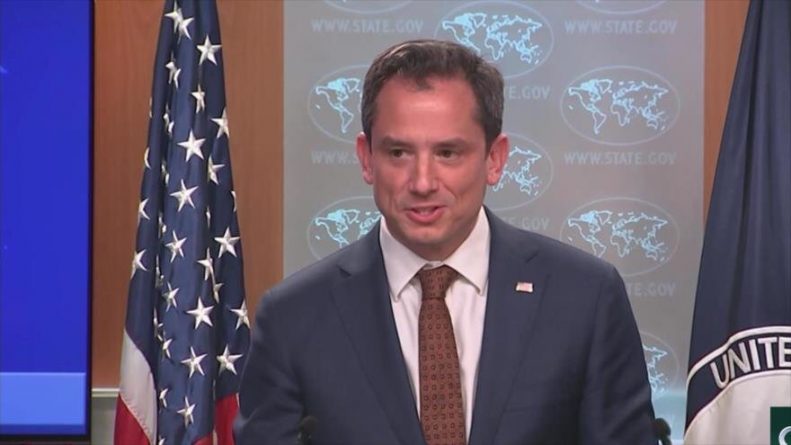 The United States reaffirms its support for the opposition National Assembly in Venezuela and calls for the formation of a new government to replace that of Nicolás Maduro.

The spokesman for the US Secretary of State, Robert Palladino, insists today in a statement that Washington is committed to democracy and the rule of law in Venezuela.

“It’s time to start an orderly transition to a new government,” said Palladino, assuring the US supports “the call of the National Assembly (Parliament) to all Venezuelans to work together, peacefully, in the restoration of a constitutional government and in the construction of a better future.”

With these words the US diplomat has hardened the criticism of his country to Maduro who swore on Thursday as president of Venezuela before the Supreme Court of Justice (TSJ) for the constitutional period 2019-2025.

The Government of the United States, together with the Venezuelan opposition and several countries of the American continent, have ignored the legitimacy of the Maduro Government, who won the elections of May 2018 with more than 5 million votes.

The Venezuelan National Assembly, which had already accused Maduro of “usurping” the presidency, on Friday called a mobilization for January 23 in favor of a “transitional government.” The US Secretary of State, Mike Pompeo, took advantage of Saturday in his visit to Dubai, in the United Arab Emirates (UAE), to reiterate his commitment to the Venezuelan right wingers.

He has confessed that the White House is working for two years to promote a change of government in Venezuela, and establish, in his view, “a true democracy in that country.”

The US Administration, chaired by Donald Trump, again resorted to sanctions on Tuesday to show its rejection of Maduro, then promised to use all its economic and diplomatic power to increase pressure on the “chavista regime”.

Maduro, for his part, took advantage of his swearing-in speech to denounce that “US imperialism and its satellites” are waging “a world war” against their country. He denounced that “the oligarchy and imperialism”, base of the dictatorships in the continent, “try to overthrow the Bolivarian national process” that he heads, but he assured that his Government will defend itself from all “media and political manipulation”.