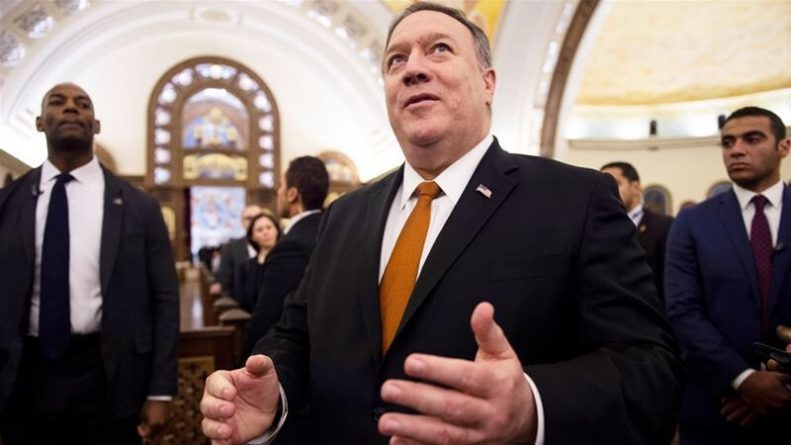 US calls for ‘orderly transition’ to a new government, days after Maduro began a disputed second term as president.

US Secretary of State Mike Pompeo has called Venezuela’s government under President Nicolas Maduro “illegitimate” as Washington steps up its call for an “orderly transition” to a new government.

“The Maduro regime is illegitimate and the United States will work diligently to restore a real democracy to that country,” Pompeo told reporters on Saturday in Abu Dhabi during his tour of the Middle East countries.

Pompeo said the United States would work with like-minded countries in Latin America to restore democracy in the Latin American nation.

“We are very hopeful we can be a force for good to allow the region to come together to deliver that.”

In a statement earlier on Saturday, the US State Department also said it stood behind the head of Venezuela’s opposition-run congress, Juan Guaido, a day after he said he was prepared to step into the presidency temporarily to replace Maduro.

The two statements were only the latest in a series of Trump administration’s attacks on Maduro, whose inauguration to a disputed second term as president took place on Thursday.

“The people of Venezuela deserve to live in freedom in a democratic society governed by the rule of law,” State Department spokesman Robert Palladino said.

“It is time to begin the orderly transition to a new government. We support the National Assembly’s call for all Venezuelans to work together, peacefully, to restore constitutional government and build a better future,” he said in the statement also released from Abu Dhabi during Pompeo’s trip.

“The United States government will continue to use the full weight of US economic and diplomatic power to press for the restoration of democracy in Venezuela.”

Earlier this week, Pompeo spoke to opposition leader Guaido shortly after the 35-year-old was elected to lead the National Assembly.

Pompeo told reporters travelling with him that the events taking place in Venezuela were “incredibly important”.

Guaido, speaking to a crowd blocking a Caracas street a day after Maduro’s inauguration, said he was willing to become interim leader.

But he said he would need support from the public, the armed forces and other countries and international groups, before trying to form a transitional government to hold new elections to replace Maduro.

The head of the Organization of American States, Secretary-General Luis Almagro, responded quickly, sending out a tweet recognising Guaido as Venezuela’s interim president.

Seventeen Latin American countries, the US and Canada denounced Maduro’s government as illegitimate in a measure adopted on Thursday at the OAS in Washington.

US National Security Adviser John Bolton praised Guaido, although Bolton did not echo Almagro’s step of calling him the interim president.

Bolton reaffirmed the US position that the May election that gave Maduro a second term was “not free, fair or credible”.

Bolton said “we support the courageous decision” of Guaido’s declaration “that Maduro does not legitimately hold the country’s presidency”.

Guaido asked Venezuelans to mass in a nationwide demonstration on January 23, a historically important date for Venezuelans – the day when a mass uprising overthrew dictator Marcos Perez Jimenez in 1958.

The country’s constitution assigns the presidency to the head of the National Assembly if Maduro’s rule is declared illegitimate.

Venezuela’s military, so far, has remained firmly behind Maduro, despite reports of small-scale attempts at a revolt.

A once-wealthy oil nation, Venezuela is gripped by a growing crisis of relentless inflation, food shortages and mass migration. [This is said is the result of the US sanctions and economic war promoted by the same US and its allies.]