Amid the bombing siege of the Gaza Strip and the brutal repression of worshipers in al-Aqsa Mosque, protests against Israeli aggression and in solidarity of the Palestinian struggle have been organized globally

The Israeli apartheid regime has once again shown to the world its commitment to barbarity through the relentless attack on all forms of Palestinian resistance. The barrage of bombing in Gaza has taken the lives of over 80 people and injured hundreds. This is part of a larger assault on Palestinians and their rights for weeks starting with the placing of barriers at Damascus Gate and the attempt to expel Palestinian families who have been living in Sheikh Jarrah in East Jerusalem for generations.

Amid protests in defense of Sheikh Jarrah and against the Zionist policies of ethnic cleansing and genocide, Israeli forces invaded the al-Aqsa mosque compound and violently attacked and arrested worshipers, injuring over 300.

The subsequent bombing of Gaza that began on Monday saw the targeting of residential towers housing hundreds of Palestinians and other civilian infrastructure. Prime Minister Benjamin Netanyahu has vowed that attacks will intensify.

At the same time, Palestinians living inside Historic Palestine have been mobilizing to reject Israel’s actions and they too have been met with racist violence. Lynch mobs have been terrorizing Palestinians in the cities of Bat Yam, Jaffa, Akka, Haifa, Lyd and elsewhere.

Israeli mobs are marching through several cities, terrorizing Palestinians. In Bat Yam, they are attacking people in the streets and destroying shops and homes. pic.twitter.com/pFHklzCA16

The bombing in Gaza, the violent incursion into al-Aqsa, and the threat to displace more families from the city of Jerusalem has sparked a strong response from groups and organizations from across the world that have historically considered solidarity with the Palestinian cause to be at the heart of the anti-imperialist and anti-colonial struggle.

Organizations from Ireland to Iraq have organized mobilizations and released declarations in support of the Palestinian people and condemning Israeli aggression. Protests will continue throughout the week especially given that Saturday is when Palestinians commemorate Nakba Day, marking the violent establishment of the state of Israel.

Arab-Maghreb Region
In the last four years, one of the key shifts in the Arab-Maghreb region regarding the Palestinian cause has been the announcement of normalization deals with Israel by several key states like Morocco, UAE, Bahrain, and Sudan in exchange for diplomatic, political and economic “gains”. These deals were achieved through aggressive US lobbying, recognizing that the support of neighboring countries to the Palestinian cause and the isolation of Israel has been a major roadblock to consolidating US-Israeli hegemony. However, these deals received widespread rejection from the people in these countries who continue to champion the Palestinian struggle as their own.

In recent days, people’s movements and organizations in the region have been organizing a series of impressive mobilizations in support of the Palestinian people and condemning the criminal actions of the Zionist state.

In the statement, they expressed their support to the Palestinian people and condemned the US-Zionist “deal of the century” which has attempted to advance the full occupation of Jerusalem with support of a number of Arab regimes. They call on Arab popular forces to double down on their support of the legitimate resistance of the Palestinian people and reject Zionist policies of “ethnic cleansing, home demolitions, land theft and sacrilege.” They also call on them to confront the recent shifts of normalization and complicity of the Arab reactionary regimes and their interference in Palestinian affairs in favor of the occupation, among other calls.

Accompanying the statements, organizations have also been on the streets to show their support.

In Morocco, in defiance of the reactionary regime, mobilizations were organized in Casablanca, Rabat, and Tangierand faced violent repression.

In Tunisia, the Workers’ Party, along with other progressive forces in the country, released a statement in support of the Palestinian cause and organized a rally in the capital.

In Kuwait, progressive forces took to the streets as well. 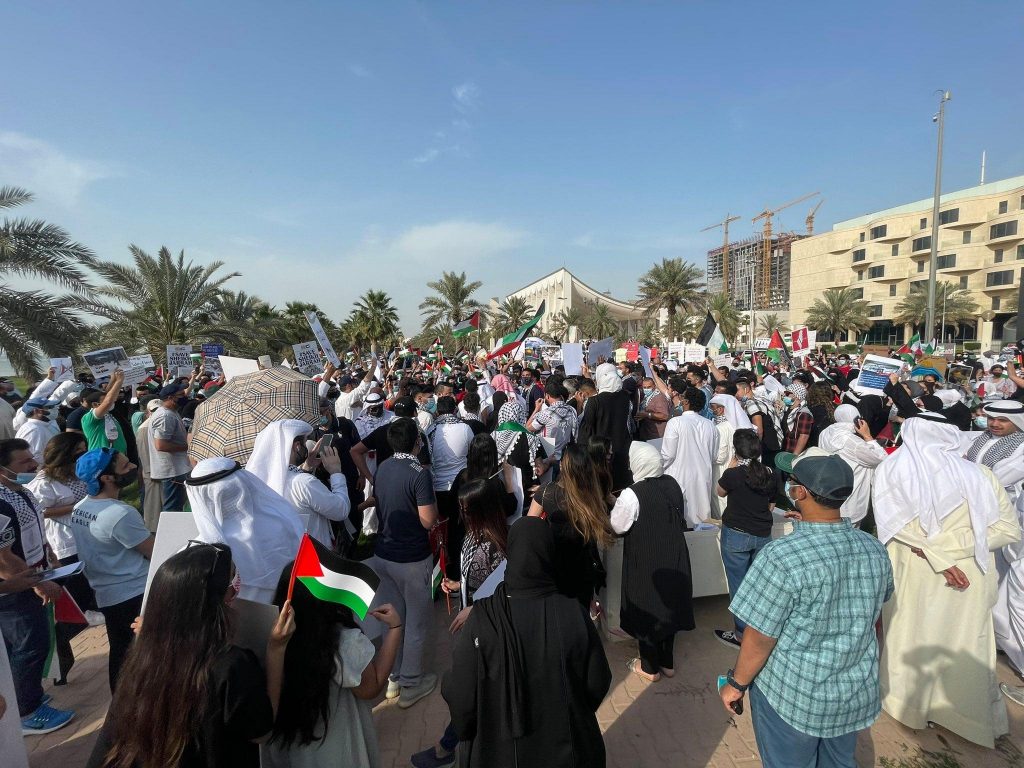 In Sudan, members of the Sudanese Communist Party held a solidarity rally.

Latin America and the Caribbean
People’s movements and organizations, as well as revolutionary governments in the region, have been quick to express their support for the Palestinian people in light of growing aggression and attacks.

The Landless Rural Workers’ Movement (MST) of Brazil released a statement on May 11 wherein they pointed out that “It is not a war, as there is only one army, that of Israel! It is a massacre, which has been perpetrated against the Palestinian people for more than 70 years!” The movement called for an end to “Israel’s extermination policy” and demanded that Israel be tried for crimes against humanity. The MST express solidarity “with the Palestinian People’s struggle for a Free Palestine, with Jerusalem as its capital!”

Cuban Foreign Minister Bruno Rodríguez wrote that “Cuba emphatically condemns the indiscriminate bombings of Israel against the Palestinian population n in Gaza and condemns the permanent support of the US in these crimes.”

RELATED CONTENT: Number of Palestinians Killed by Israeli Bombings Rises to 53, Including 14 Children

The Foreign Ministry of the Bolivarian Republic of Venezuela released a strong statement condemning “the new violent actions committed by Israel against the Palestinian people.” The statement declared that, “Venezuela reaffirms its historical and principled position in defense of the sovereignty, independence and self-determination of the Palestinian people, while expressing its support for the government of the Palestinian National Authority and its solidarity with the victims and their loved ones, following the cruel attacks carried out by the military and police forces of Israel, which have taken the lives of innocent civilians, including those of several minors.” It also called on the world to “demand an end to this new phase of Zionist violence against the Palestinian people.”

Beyond statements, both socialist Cuba and Venezuela have historically provided concrete support to the Palestinian cause and people, such as opening their doors to hundreds of Palestinian students so that they can train in medicine and return to the region to help serve the people.

Africa
The people across the African continent have also been historic allies of the Palestinian cause and many have also taken to the streets and social media to manifest their solidarity this week.

The shack dwellers movement of South Africa, Abahlali baseMjondolo, released a statement declaring that “The Blood of the Palestinians is our Blood.” They highlighted the similarities in experiences of oppression and violence by colonial occupiers stating “As everyone knows, a shared experience of colonial dispossession and oppression – and of apartheid – means that most South Africans have a deep understanding and concern for the suffering and struggle of the Palestinian people…Because of our past and our present we have a deep sense of solidarity for the Palestinian people who continue to suffer under an extremely brutal colonial occupation. Their pain is our pain. We know what it means to live not knowing whether your home and that of your children will be destroyed. We know what it means to live without the protection of the law, and under a state that considers you outside of the law. We know what it means to have innocent people in jail, people whose only crime was to stand up for justice.”

Organizations such as the Socialist Revolutionary Workers Party (SRWP), the Communist Party of Kenya and others also expressed solidarity.

In Johannesburg, a protest was organized by BDS (Boycott, Divestment and Sanctions) outside the Israeli Trade Center in South Africa in Solidarity with the people of Palestine.

United States
While politicians in the US continue to back Israel despite its genocidal actions against Palestinians, the tide is definitely changing in terms of the population. On May 11 and 12, massive protests were organized in cities across the United States such as New York, Washington D.C., Los Angeles, Chicago, and more.

"Hey Hey, Ho Ho, the occupation has got to go!" pic.twitter.com/3aCvpzxXGW

Statements have also been released to demand that the US government drastically change its policy of providing billions of dollars of military aid to Israel as well as unquestioned political support. Sharp criticism has been directed at mainstream news organizations in the US which continue to favor Israel and dehumanize Palestinians.

Europe
A number of left parties and progressive movements across Europe also condemned Israel’s attacks on Gaza and on the Palestinian people such as the European Left Party, Ireland’s Sinn Fein, and others.

The international community must hold the Israeli apartheid regime to account for its crimes against the Palestinian people. The Irish Government must use its seat on the UN Security Council to ensure human rights are protected – @johnbradysf 🇮🇪 🇵🇸 #FreePalestine #GazaUnderAttack pic.twitter.com/NzTMrrpUgD

Featured image: Several thousand took to the streets in New York City on Tuesday May 10 in solidarity with Palestine. Photo: Breakthrough Nnews