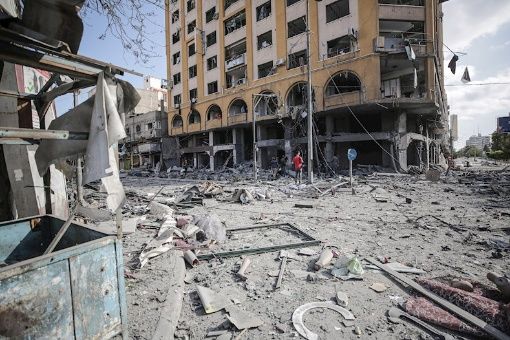 The bombings on Gaza Strip have left more than 300 injured and a number of buildings severely damaged.

The massive bombardments by Israeli air forces against the blockaded Palestinian enclave of Gaza Strip has left 53 Palestinians dead, including 14 minors, and over 300 injured, while the international community has called for a cessation of hostilities.

The Gaza Ministry of Health has indicated in its latest report that among the fatalities there are 14 children, and so far there 320 injuries have been reported. At least eight more Palestinians have died in bombardments carried out by Israel during the last few hours in various areas of Gaza.

Among the victims are four young people who were on a street in Gaza City, as well as four farmers who were hit by an aereal attack in the north of Gaza Strip, without the Israeli authorities having acknowledged their responsibility.

The #Palestine Red Crescent latest report as of today (14:00 #Jerusalem Time) on the # of injuries and casualties they have attended to in #Gaza and Occupied E. Jerusalem ⁦@PalestineRCS⁩ ⁦@RedCross ⁦@UN⁩ ⁦@UNISPAL⁩ #SaveSheikhJarrah pic.twitter.com/pvDv3fBXPl

This situation arose from the attacks last weekend by Israeli occupation forces and settlers on the Al-Aqsa Mosque and Haram-al-Sharif, the third holiest site in Islam, in East Jerusalem, which was annexed by Israel in 1967.

Concern is growing in the international community and the UN Security Council is preparing for another emergency meeting on Wednesday.

The United Nations Relief and Works Agency for Palestine Refugees (UNRWA) has condemned “in the strongest terms” the death of four Palestinian children near the Beit-Hanoun refugee camp in northern Gaza, all of them members of the same family.

“They were under 12 years old and were known to the agency because they went to UNRWA schools,” the organization said in a statement, in which it conveyed its condolences to their families and members of the communities “so cruelly affected by this latest spike.”

Along these lines, the chief prosecutor of the International Criminal Court (ICC), Fatou Bensouda, also warned on Wednesday on the “possible commission of crimes” in the framework of the violence since Monday, and expressed “great concern” because of “the escalation of violence in the West Bank, East Jerusalem, as well as in and around Gaza.”

On the other hand, Israel rejected the proposal put forward by the United Nations Organization and the Egyptian government for a ceasefire with the Islamic Resistance Movement (Hamas) of Palestine, which governs Gaza.

Instead, Israeli Defense Minister Benjamin Gantz stressed that the indiscriminate agression will continue and that the country “is not preparing for a ceasefire.” “Right now there is no end date for the operation,” he added.

UNRWA joins other @UN entities in raising alarm over eight #SheikhJarrah families, approximately 75 persons in total, residing in the same named neighbourhood of East Jerusalem that are at risk of imminent forced eviction, placing them at heightened risk of forcible transfer.

This latest situation originated from increased in tensions in Jerusalem over the eviction orders of Palestinian families in the Sheikh Jarrah neighborhood of East Jerusalem, which intensified in recent days to protest against the repression by the Israeli security forces. It left hundreds of Palestinians injured, ending with a brutal attack by Israelis on worshipers at the Al-Aqsa mosque during the last days of the holy month of Ramadan.

Currently the United Nations Security Council is holding a meeting at the UN Headquarters in New York to discuss possible ways to “de-escalate” the situation.

Russian President Vladimir Putin and his Turkish counterpart Recep Tayyip Erdogan called for the de-escalation on Wednesday, as did the President of the European Council, Charles Michel.

The UN envoy for the Middle-East, Tor Wennesland, raised alarm over the risk of a “full-scale war.” For its part, the International Criminal Court (ICC) lamented that “possible crimes [against humanity]” may have been committed over the course of the bombings and clashes.