The year 2022 ended with the United Nations Security Council once again debating whether foreign troops should be deployed into Haiti, in flagrant violation of the nation’s 1987 Constitution, whose 35th anniversary was celebrated on March 29.

Stealthily and relentlessly, Washington has been putting in place an improved alternative team to lead the transition to elections that de facto Prime Minister Ariel Henry and his Musseau Accord coalition have been unable to make any progress in preparing. The Montana Accord coalition, their arch-rival, is billed as “Haitian-led,” 2022’s new mantra, but they are, in fact, in the words of Haitian analyst Paul Mocombe, “a group of technocrats who are looking to be in the good graces of the CORE group,” a US-led collection of ambassadors in Haiti.

Washington’s ultimate goal is to implement in Haiti the Global Fragility Act (GFA), which President Trump signed into law in 2019 with full bipartisan support. The GFA is the marriage of Washington’s two most powerful robot arms: USAID and the Pentagon. Haiti is the pilot case for the program, whose goal is “countering Russian influence, Chinese influence, and dealing with other malign actors on the international stage,” in the words of Paul B. Stares, a senior fellow at the ruling-class think-tank Council on Foreign Relations.

With war raging between the US proxy Ukraine and Russia, and tensions with China growing rapidly, Washington’s moves on Latin America’s first nation are largely under the radar of the mainstream press and even North America’s anti-imperialist movement. But an unprecedented, increasingly conscious, and growing armed movement is emerging from Haiti’s miserable shantytowns, thus portending that Haitians today may reenact a world-changing revolution like the one their ancestors carried out in 1804 when the large nations of the Northern Hemisphere were also at war.

January 3: Panamanian authorities arrest former Colombian soldier and mercenary, Mario Antonio Palacios Palacios, 43, an alleged triggerman in the murder of President Jovenel Moïse, as he transits through Panama on his way back to Colombia from Jamaica. After Moïse’s July 7 assassination, Palacios had fled to the Dominican Republic, and from there to Jamaica, where he had hidden for about six months until Jamaican authorities arrested him. He was extradited to Miami, FL for trial.

January 6: Gunmen from the gang of Jean Mensatto Petit alias “Toto Borlette” killed Haitian journalists John Wesley Amady and Wilguens Louis-Saint, who were reporting on the lack of security in Laboule 12 above Pétionville. Amady, who was on assignment for the Montreal-based broadcaster Radio Écoute FM, was a cameraman on the documentary series “Another Vision,” produced by Haïti Liberté with Uncaptured Media.

January 11: The Montana Accord coalition select former central bank director Fritz Alphonse Jean and former senator Steven Benoît to be respectively the President and Prime Minister of their proposed two-year political transition to an elected government.

January 15: Jamaican authorities arrest and extradite days later to the US former Haitian Senator John Joël Joseph, who had been hiding in Warminster, west of Kingston. He too is charged in Miami with involvement in the murder of Jovenel Moïse.

January 24: US immigration officials detain and interrogate former Haitian Sen. Moïse Jean-Charles as he passes through Miami on his way back to Haiti from stops in Africa, Qatar, and Turkey. After 24 hours, he is deported to Haiti and barred from future US entry.

February 9: Hundreds of assembly factory workers begin two days of demonstrations and strikes at the SONAPI industrial park in Port-au-Prince to demand a minimum salary of 1500 gourdes ($15) per day.

February 14: After a stormy meeting three days earlier, negotiations between de facto PM Ariel Henry and a delegation from the Montana Accord coalition break down when the latter angrily leave the Prime Minister’s office after waiting a several minutes without him showing up. He arrived a few minutes later, saying they left prematurely.

February 21: In the face of protests, the government raises the minimum wage for assembly factory workers to 685 gourdes ($9.32) instead of the 1500 gourdes demanded.

February 21: Dr. Paul Farmer, 62, the founder of Partners in Health, which started in Cange, Haiti, dies from heart failure in Rwanda.

February 22: Dominican President Luis Abinader poses for photo-op at a wall his government is building along the 244-mile border with Haiti.

March 6: In a scene reminiscent of the 1980s, 300 Haitian “boat-people” see the vessel transporting them sink off Key Largo, FL, leaving them to be detained at the Ocean Reef Club.

March 7: Anne Witkowsky, Assistant Secretary of State for the Bureau of Conflict and Stabilization Operations (CSO), visits Haiti to pressure for a deal to be made between PM Ariel Henry’s Musseau Accord and its rival “civil society” coalition, the Montana Accord, for a transition government.

March 14: The Haitian Medical Association (AMH) calls for a three-day strike at hospitals and clinics to protest against kidnapping, following the abduction of two doctors.

March 29: On the 35th anniversary of Haiti’s 1987 Constitution, tens of thousands march throughout Haiti to protest against insecurity and to call for PM Ariel Henry’s resignation.

April 8: The Haitian government forms a three-member “Mediation Committee” in an attempt to forge a compromise between the different, rival “political accords” vying for control over the transition leading to elections.

May 1: Thousands of assembly factory workers march in Port-au-Prince to demand a minimum wage of 1,500 gourdes a day instead of a mere 685 gourdes.

May 18: The Fort National-based popular organization MOLEGHAF withdraws from the Montana Accord coalition, calling it “completely rotten after its dealings with the US imperialists.”

May 24: The New York Times begins publishing articles in a landmark series called “The Ransom,” about how France extorted billions of dollars from Haiti in repayment for the nation’s successful 1804 revolution against slavery and colonialism. Controversy ensued.

June 11: De facto PM Ariel Henry gives a speech at the “Summit of the Americas” in Los Angeles, an event from which the US banned several countries, prompting others to boycott. Henry’s attendance sparked outrage.

July 8: After previous skirmishes, heavy battles break out in the Port-au-Prince slum Cité Soleil between the anti-crime neighborhood federation, the “Revolutionary Forces of the G9 Family and Allies, Mess with One, You Mess with All” (FRG-9) and the coalition of criminal gangs known as the “G-Pèp.”

July 15: The UN Security Council renews the mandate of the United Nations Integrated Office in Haiti (BINUH) for one year, despite differences between the US, China, and Russia.

July 24: 17 Haitian “boat-people” die when their vessel sinks off of New Providence, Bahamas.

August 2: Negotiations between PM Ariel Henry’s Musseau Accord and the Montana Accord break down once again, this time, apparently, irreconcilably.

August 22: On the anniversary of the launching of Haiti’s revolution in 1791, large anti-government demonstrations erupt in Cap Haïtien, Petit-Goâve, Jacmel, and Port-au-Prince.

August 24: Unidentified gunmen wound Domini Resain, a militant with MOLEGHAF in Fort Liberté. Oxygène David says it is because Resain is “a spearhead in today’s nationwide mobilization.”

August 26: In light of unrest, insecurity, and economic crisis, the government delays the reopening of schools from September 5 to October 3.

September 19: Ex-US Special Envoy to Haiti Daniel Foote at a rally in front of the White House in Washington, DC says: “The US has two choices: either reinforce the police now, probably using military trainers, so send a company of special forces trainers to teach the police and set up an anti-gang task force, or send 25,000 troops at some undetermined but imminent period in the future.”

September 26: The Unified Front of Haitian Transporters and Workers (FUTRAH) begins three days of a general strike against the doubling of fuel costs. 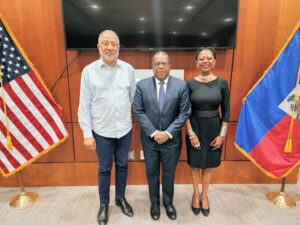 October 12: US Assistant Secretary of State for Western Hemisphere Affairs Brian Nichols arrives in Port-au-Prince for two days of talks with PM Ariel Henry and his bourgeois opposition rival, the Montana Accord coalition.

October 23: Former Sen. Moïse Jean-Charles announces the formation of a nine-member “Transition Council of the Sovereign People,” charged with “leading the transition for 12 months to create the necessary security conditions for the organization of credible elections in the country.”

October 25: Haïti Liberté, joined by several international coalitions in North and Latin America, writes to Sacha Llorenti, the Secretary General of the Bolivarian Alliance for the Peoples of Our Americas, “to warn CARICOM member nations of the perils and pitfalls of going along with the US effort” to militarily intervene in Haiti.

Haiti in the Caribbean: A Political Economy Perspective on the Urgent Crisis of Imperialism

October 27: US Secretary of State Anthony Blinken and Canadian Foreign Minister Mélanie Joy hold a joint press conference in Ottawa, where they outline their push for a foreign intervention in Haiti.

October 28: Unknown assassins ambush and fatally machine-gun Eric Jean-Baptiste, the Secretary General of the Assembly of Progressive National Democrats (RNDP), and his driver as they drove to his home in Laboule 12, an area plagued by gang warfare.

November 11: Harrisson Ernest denounces as untrue CNN’s Nov. 4 report that the Varreux fuel terminal was opened due to two weeks of negotiations between the Ariel Henry government and the FRG-9.

November 12: Dominican President Luis Abinader publishes Decree 668-22 which allows the expulsion of thousands of people living on agricultural plantations (“bateys”) for decades and is repudiated by the sugar cane workers union. 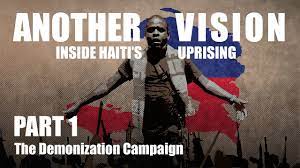 November 18: Haïti Liberté and Uncaptured Media release the last episode of a three-part documentary series entitled Another Vision: Inside Haiti’s Uprising, a chronicle of the rise of the FRG-9.

November 21: Hundreds protest in the northeastern border town of Ouanaminthe to protest the mistreatment and expulsion of Haitians from the Dominican Republic.

December 7: Bob Rae, Canada’s Ambassador to the UN, begins a three-day visit to Haiti to push for foreign intervention, meeting with PM Ariel Henry, the Montana Accord coalition, and the Haitian police leadership.

December 13: The US Navy’s hospital ship Comfort stops its services off the southwestern city of Jérémie reportedly due to popular protests against its presence in Haitian waters. The Navy said, however, it suspended services due to strong ocean swells which caused 19 people to fall overboard.

December 21: Haïti Liberté journalist and English-language editor Kim Ives speaks before the UN Security Council in a meeting about Haiti. He tells the 18 member nations present that they had received “half-truths” from BINUH chief Helen La Lime, that the Council’s October sanctions had been “misguided and counter-productive,” and that Haitians are overwhelmingly against another foreign military intervention. Haiti and Canada take issue with Haïti Liberté’s analysis, while Russia praises it.

December 21: In Port-au-Prince, Ariel Henry unveils a three-member “High Council of Transition,” headed by former RNDP leader and presidential candidate Mirlande Manigat, to lead the political transition to elections. The initiative is widely condemned or scoffed at by Haiti’s political class.