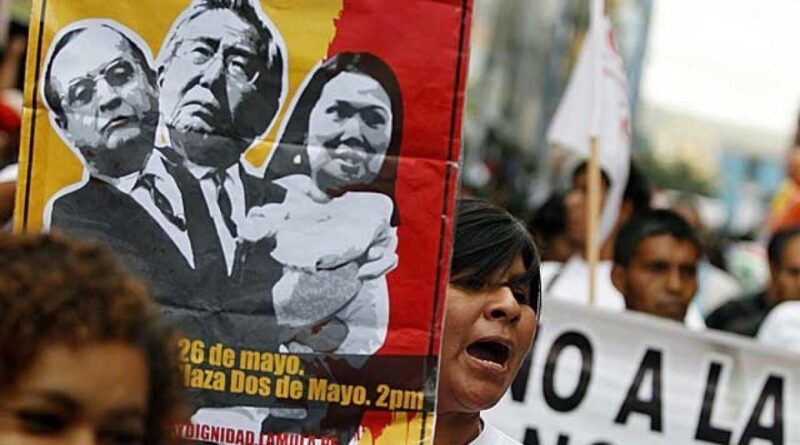 Half an hour’s taxi ride from the House of Pizarro, the presidential palace in Lima, Peru, is a high-security prison at the Callao naval base. The prison was built to hold leaders of Sendero Luminoso (Shining Path), particularly Abimael Guzmán. Not far from Guzmán’s cell is that of Vladimiro Montesinos, intelligence chief under former President Alberto Fujimori, who is also now imprisoned. Montesinos was sentenced to a 20-year prison term in 2006 for embezzlement, influence peddling, and abuse of power. Now, audio files from phone calls made by Montesinos from his prison indicate an attempt to influence the results of Peru’s presidential election after Pedro Castillo, the candidate of the left-wing Peru Libre party, won the election.

By the evening of June 6, 2021, Peru’s National Jury of Elections should have declared Pedro Castillo the winner of the presidential election. But it did not. A month later, matters remain in stasis as Peru does not yet have an official winner of the election.

Castillo’s opponent, Fuerza Popular’s Keiko Fujimori—the daughter of the former dictator Alberto Fujimori—has hired a range of Lima’s top lawyers to obstruct any decision by the state’s electoral commission. In addition, her team has cast aspersions against the campaign of Castillo and Peru Libre, accusing them—without evidence—of being financed by disreputable groups, including drug cartels. The Peruvian media, largely controlled by the oligarchy, have gone along with Fujimori’s allegations; their apparent goal is to paint Castillo as an illegitimate winner and to set aside the verdict of the electorate.

RELATED CONTENT: ‘Stop the Steal’ Campaign by Losing Candidate in Peru Must end

Bribes
Meanwhile, hard evidence continues to emerge of the dirty tricks at the heart of Fujimori’s campaign to steal the election. Montesinos, the right-hand man of Fujimori’s father, made 17 phone calls from the prison between June 2 and June 24. Twelve of these calls resulted in a phone conversation; there was no answer to five of them. The Peruvian naval authority in charge of the prison said that Montesinos had applied to call his girlfriend. On June 26, Peru’s Defense Minister Nuria Esparch indicated that the navy will conduct an investigation.

Montesinos did not call his girlfriend. Instead, the old spymaster—and former CIA agent—called Pedro Rejas, a former commander in Peru’s army who is close to the Fujimori campaign. Montesinos tells Rejas in one call on June 10 to bribe the three members of the election commission $1 million each. “The only solution is to work through Guillermo in order to transfer the payment in favor of the three electoral jury members, who are supposed to be open to the bribe, and therefore guarantee the result.” The “Guillermo” in the conversation is Guillermo Sendón, who is on record affirming his relationship with one of the members of the electoral commission, Luis Arce Córdova. Sendón says that he helped Arce in his failed campaign to become president of the Supreme Court and met Arce several times in this period. Sendón’s last recorded visit to Arce was on June 22.

The audios are damning. In Peru, the case is known as Vladiaudios. This is a nod to a 20-year-old scandal called Vladivideos, when Montesinos was caught on tape bribing congressman Alberto Kouri to support Peru 2000, the party of Alberto Fujimori. In the months that followed, more videos came out: Montesinos offering millions of dollars to Channel 2, Channel 4, Channel 5, and Channel 9 if they prevented the opposition from coming on their television programs. The Vladiaudios are as damning as the Vladivideos, both showing Montesinos attempting to use bribery to secure the electoral victory of the Fujimoris.

Where will the money come from? Montesinos proposes that Rejas approach Dionisio Romero (the CEO of Credicorp) and Rafael López Aliaga. It seems he has thought about everything: what to do and how to do it. Sitting in jail, this old intelligence agent could not do it himself. He required an accomplice and phone calls that were recorded and leaked to the media.

RELATED CONTENT: Is Peru on the Verge of a Coup?

Montesinos gives precise instructions. Keiko Fujimori’s husband “can go [to the embassy], since he is an American citizen.” Her husband is Mark Villanella, whom she met at Columbia University in 2004. “Take the documents,” Montesinos advises. “Show them. Deliver them to the embassy and ask them to bring them to their chief in Washington… And in Washington, the chief can bring it to the notice of the president, and the White House spokesperson can issue a statement to prevent Cuba, Venezuela, or Nicaragua from imposing their will in Peru. With such a statement, they have great leverage.”

Montesinos is not the only one in Fujimori’s circle with a history of trying to involve the United States in Peru’s elections. Her close adviser Fernando Rospigliosi has a long history of walking into the US Embassy and asking for assistance in preventing the left from prevailing in elections. The current US ambassador in Peru—only recently appointed—is Lisa Kenna, a former CIA agent.

Luis Arce, the man on the electoral commission, is now under investigation by Peru’s public prosecutor.

Meanwhile, the National Jury of Elections has still not closed the election in favor of the winner, Pedro Castillo. What we have instead is unconventional warfare with the US Embassy as a player in the drama. Coups nowadays in Latin America do not need armies. Having good lawyers, bags of money, and a handful of thugs in and out of jail is all that is needed.